On The Green Route

Although alternative fuels, such as CNG and LPG, have been powering vehicles on Indian roads for some time now, the public awareness of these cleaner and cheaper options still remains inadequate.

How is natural gas formed?
Natural gas is a fossil fuel formed from organic matter stored underground, without the presence of air, for a long periods subject to high pressure. Natural gas deposits are usually between 15 and 600 million years old. Petroleum is also formed under similar conditions and is the reason why both fuels are usually found together. Of course, sometimes, gas may be found without the oil deposits.

Do CNG cars explode often?
No, there is no evidence to show that natural gas-powered cars are unsafe. Whether the car is equipped with a factory fitted CNG engine or whether the engine was re-tooled in the aftermarket to adapt it for CNG use makes no difference to the safety. As along as the fitment is done properly by authorised personnel, there is no extra danger since a cutoff valve prevents build-up of extra pressure.

Check out the latest eco-friendly cars in the market

How long can gas vehicles go without refuelling?
This is dependent on volume of the fuel tank. CNG cars can be equipped with tank sizes of 12-30kg, allowing the vehicle to travel between 200-500km on just gas operation. With LPG vehicles, the tank sits in the spare wheel well, which is approximately 50 litres. Depending upon driving and consumption this is enough for distances between 350-600km. Larger tanks would have a greater range.

Can a carbureted car be fitted with LPG?
Carburettor engines can indeed be re-equipped to run on LPG as well. The engine functions on the Venturi Principle and the LPG metering valve uses the negative pressure in the siphon or inlet manifold to ensure gas flow. The equipment is fitted only if the examiner is convinced the reequipment will function properly. It should also be clarified before the installation whether the engine type is conducive for the use of CNG or LPG as fuel. 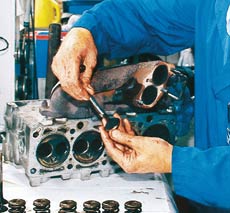 What are the problems in refitting an engine to accept LPG as fuel?
Protective additives are not present in LPG. This can cause problems for highly thermally-loaded exhaust valve seat rings. If these are too soft, the valve works itself into the valve seat, which shrinks from valve clearance, leading to damage to the engine. With some engines the original valve seat needs to be exchanged for a hardened ring for better functioning.

What does LPG consist of?
LPG is a fossil fuel that comprises propane and butane. The butane percentage it possesses dictates the octane number it gets, which can range from 105 to 115 RON (research octane number-denoting its resistance to detonation). The higher the RON value, the lower is the density, with the lowest density being 0.54 kg per litre. It is stored as a liquid.

Can LPG be used instead of CNG?
No, under no circumstances can the two different gases be replaced with each other. Although both are gases, CNG (compressed natural gas) and LPG (liquefied petroleum gas) are stored under different pressures and are only suitable for use in vehicles that have been specially equipped to accept one of the two fuels. While the operating pressure of natural gas vehicles is 200 bar, the operating pressure is only a scarce 10 bar for LPG. Any attempt to fill an LPG tank with CNG therefore would inevitably end with an explosion of the tank. In addition, LPG is stored in liquid form while natural gas is stored in gaseous form. Of course, the filler neck for CNG at any station will not fit the adapter of the LPG vehicle. Hence, a mistake is not physically possible.

What is the difference between the two?
Compressed natural gas, also known as CNG, consists mostly of methane and is lighter than air and is stored at a pressure of approximately 200 bar and is measured in kilograms. LPG (liquefied petroleum gas) on the other hand consists of a propane butane mixture. It is produced from natural gas or oil and is stored as a liquid at a pressures of around 10 bar. More importantly, LPG also gives greater mileage and results in lower loss of power. However, a greater number of CNG stations are found in the country while LPG can be bought in cylinders designed for cars.

Can one re-equip diesel engines for LPG?
The process is labour-intensive and complex. The self ignition would have to be provided with spark plugs instead of glow plugs and the appropriate ignition controls for the engine have to be adapted. Even so, we already have numerous examples of diesel engines converted to run on CNG in public transport buses. Click here to Enlarge
How do I refuel gas vehicles?
Refuelling LPG and CNG is done differently using different nozzles. Apart from the CNG refuelling method shown below (left), the gas is sometimes also filled from under the bonnet. It depends on the car and the kit it is fitted with. Also, LPG is less available compared with CNG. 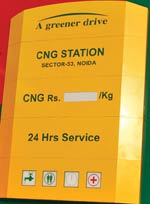 Will I find out if there is a leak?
An odour is added to the normally odourless gas (CNG or LPG) so that a leak does not remain unnoticed. Even smallest of leaks are detectable. If there is an unpleasant odour inside the car, pull over, switch the engine off and call the fire brigade.

Will CNG and LPG remain cheap?
CNG and LPG will remain cheaper for many years as compared with conventional fuels since it has been highly subsidised by the government.

But in spite of the tax reduction, prices of both CNG and LPG may rise in the coming years as demand for them increases but not at the same pace as diesel and petrol. What are the effects of using the gas operation on the environment?
In comparison with petrol or diesel fuels, gas burns more cleanly and emits fewer toxic gases on combustion. As a result the dangers of environmental pollution are reduced if a vehicle is made to run on gas instead of conventional fossil fuels like diesel or petrol.

Is it worth re-equipping new vehicles with LPG?
If your daily commute is over 50km you can easily recover the money in one year. In principle, all ex-factory offerings of LPG vehicles are adapted from petrol engines so that the volume for the latter remains unchanged. If a new vehicle is re-equipped, an auxiliary warranty and insurance should be also be taken.