Sam Abraham introduces new products to help you zero in on those that offer value for money.
Print Edition: December 2013 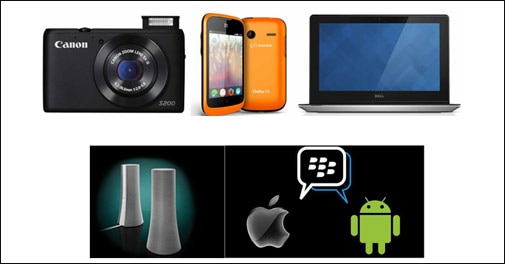 Sam Abraham introduces new products to help you zero in on those that offer value for money.

The S200 has been designed to fit in pockets and is also quite light. It uses a CCD sensor (10.1-megapixel) and Canon's older Digic V processor. Picture quality is quite in the range of point-and-shoot cameras, with vibrant coulours exaggerated with a bit of oversaturation. Exposures are accurate in the automatic mode. ISO sensitivity ranges from 80-6,400, though don't expect great pictures with higher sensitivity. Video recording is provided at 720p, rather than Full HD, but is adequate for most purposes. Canon also lets you have both optical and digital zoom when filming.

From interface, functionality and design, pretty much every detail of BBM is identical for Android and iOS. You'll have to invite someone to be a BBM contact, unlike say for Whatsapp, via a QR code, SMS or using an account's unique PIN. Integration with social media is lacking. BBM works fine, despite the odd kinks being worked out. The design is simple and uses large elements, including a giant keyboard and large fonts. You can send voice messages and us the quintessential BBM 'ping'. The only major difference between iOS and Android is that the latter gives more options to manange the messenger.

The Z600 Bluetooth speakers tries to combine wireless flexibility with affordability. You can pair these with up to eight devices and actively connect to three devices simultaneously to switch between playing devices, like between your smartphone and laptop. There is also a 3.5mm audio cable and a USB adaptor for direct connection. It's very capable of handling mid-range sounds and will beat your laptop speaker handily, and is fantastic for casual music lovers. It's priced as such as well. It is powered using an adaptor, which connects to both satellites separately.

The ZTE Open is for those looking for an alternate smartphone experience. You get Firefox OS, which Mozilla hopes to be a true open ecosystem that replaces native applications with HTML5-based web apps. This means a good Internet connection is essential. It's a low-end device with a 3.5-inch screen, a single-core Qualcomm Snapdragon SoC, 256MB RAM, 512MB of storage (expandable) and a 3.2-megapixel camera. You don't get a lot but a new experience for a reasonable price and you'll have to go through eBay to get your hands on one.

The upgraded version of Dell's Inspiron 11 3000 series features Intel's latest 4th-generation Haswell processor, which has improved battery life to as much as 8 hours on a single charge. The 11.6-inch capacitative touchscreen (HD resolution of 1366x768) lets you take advantage of Windows 8 as well. The webcam is HD (720p) capable and, along with dual digital microphones, is workable for video conferences. You get a bunch of pre-loaded software, including Skype, PocketCloud and McAfee.

AutoBild lists out tips to keep your car safe in winters