How green is your valley?

Though India's per capita carbon emission is low, urbanites have a high personal carbon footprint. Here's how to reduce it, at little cost. If you go by numbers alone, concerns about carbon emission may seem exaggerated. At an average per capita carbon emission of 1.18 tonnes, India is a laggard compared with countries like the US (19 tonnes), Japan (9.7 tonnes) and even our stiffest competitor China (4.6 tonnes). Moreover, households contribute a meagre 10-12 per cent to the national carbon footprint. So why bother about the carbon emission you are responsible for or the ways to reduce it?

"It is because the top 25 per cent of the population, which includes the middle class, has a larger carbon footprint than others," says Jyoti Parikh, executive director, Integrated Research and Action for Development (Irade). "As lowincome households consume more resources to improve their standard of living, their footprint will increase. To maintain the overall balance, the top bracket must reduce energy wastage."

The CII-Sohrabji Godrej Green Business Centre has helped formulate the carbon footprint of an average urban household for MONEY TODAY. According to their study, an urban family of four emits 13,865 kg of greenhouse gases every year.

Says N. Muthusezhiyan, senior counsellor at the CII Centre: "We have assumed the maximum possible usage of devices. Most people will have a carbon footprint ranging from 80-100 per cent of 13,865 kg."

This figure may be lower than the average household emission in the West, but it is way higher than the carbon footprint of rural and low-income families. "It is the difference between owning two cars and none. If people incorporate the steps that we have suggested (see Small is not Costly), middle-class households can cut emissions by as much as 42 per cent," he says.

The problem, as most people believe, is that shrinking your carbon footprint may bloat your budget. A green lifestyle, they think, is an elitist pursuit and requires bigticket expenses. Is it true or just a convenient way to pass the buck? 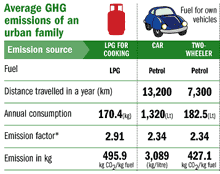 Click here to Enlarge
To find the answer, we worked out the cost of adopting the measures suggested by CII. The result is surprising. A green lifestyle can be yours for as little as Rs 1.03 lakh a year. We say 'little' because this is not incremental, but absolute cost. Moreover, it includes one-time expenses like a 5-star rated air conditioner, a solar heater and double-glazed glass for windows. From the second year onwards, staying green becomes much cheaper— about Rs 8,020. Click here to Enlarge
The only other obstacle in popular imagination is the tedium of maintaining an eco-friendly lifestyle. "It involves no hassles," says 40-year-old Arjun Valluri, who built a green home in Hyderabad last year. It boasts solar panels for heating, a sewage treatment plant and double-glazed glass windows, besides other features. "Of the nearly Rs 6 crore that I spent, only 5-6 per cent was on green additions," says Valluri. It is no noblesse oblige that motivated him to shell out extra. "The pay-back period for these measures is five years. For instance, the monthly electricity bill for a house of this size would be about Rs 22,000, whereas I pay only Rs 4,000-5,000 a month," he says.

Does this convince you that an eco-friendly lifestyle is easy to adopt and inexpensive to maintain? However, you may not know how to start building one. Here is a ready reckoner to take you through the nitty-gritty of going green.

Construction add-ons
If you are lucky enough to be building an independent house, you can enjoy a greener lifestyle than those living in an apartment. Introduce the green elements at the blueprint stage itself. For instance, ensure that you make maximum utilisation of day light to reduce electricity bills. The trick is to know when too much light transmission will result in too much heat and increase your cooling cost. Experts suggest that sunlight ranging from 100 to 500 lux (the unit used to measure illuminance) is adequate for a room.

Similarly, good ventilation is crucial to keep the cooling bills down. For the same reason, maintain a low window-to-wall ratio. This means that the number of windows in every room should be as few as possible. Says Vishal Garg, associate professor and head, Centre for IT in Building Sciences, IIIT, Hyderabad: "An ordinary window with an area of 1 sq m brings in about 850 watt of heat if it is exposed to direct sunlight. This can be cut by 75 per cent by using shades, double-glazed glass, etc." As windows account for 10-25 per cent of your heating bills, these methods are very costeffective in the long run. The upfront cost of double-glazed glass is steep, ranging from Rs 400-800 per sq ft, but you can opt for cheaper alternatives like sun films or shades, though they aren't as aesthetic as glass.

Retrofitting apartments
Readymade homes do not have too many options for changes in architecture. As the shell cannot be torn apart, you must concentrate on energy conservation by using efficient equipment. However, little things do add up. For instance, you too can change the glass of your windows or add temporary shades.

Intelligent Equipment
For most people, energy efficiency ends with buying a star-rated air conditioner. "Refrigerators also have a high electricity intake as they are never switched off," says Garg. They can constitute up to 35 per cent of the total electricity consumption of your household depending on their capacity and your usage pattern. So it is important that all appliances have a high star rating.

Garg adds that electric geysers are one of the most wasteful devices as they convert "high grade energy (electricity) to the lowest grade energy (water) at 40 degree Celsius." According to him, using gas-based equipment to heat water is also more efficient. Of course, the best option is to install a solar heater. Though perceived to be very costly, manufacturers like Venus claim that the pay-back period for a solar heater is only two to three years.

Even a shift to CFLs from ordinary incandescent bulbs makes a huge difference. According to the US Department of Energy, CFLs use up to 75 per cent less energy than normal bulbs, last 10 times longer and are recyclable. As lighting can constitute about 20 per cent of your home bills, using CFLs cuts your bills by almost 15 per cent at an incremental cost of about Rs 110 per lamp (a 14-watt CFL costs about Rs 120, whereas a 100 watt incandescent bulb comes for Rs 10). Using LED lights is even greener as they use at least 75 per cent less energy and last 25 times longer than an ordinary bulb.

Not only should you buy energyefficient appliances, but must use them intelligently too. For instance, if you leave the AC, television, computer, music system and microwave oven in the standby mode, you waste about 82 watt of power every hour. Just switching off all power strips saves a lot of money.

Fuel economy
Apart from the obvious, such as walking instead of driving to the neighbourhood market and car pooling, you can reduce fuel consumption by maintaining your car well and driving by rules. Properly inflated tyres save fuel by 5-6 per cent, using the clutch rest instead of the clutch pedal cuts consumption by another 4-5 per cent, driving in the correct gears conserves up to 10 per cent of fuel and cleaning filters regularly also saves 2-3 per cent fuel every month.

According to the US Department of Energy, an extra 45 kg in the car decreases fuel efficiency by 2 per cent. These steps cost nothing, but the savings add up to around 25 per cent of your petrol/diesel bills.

Carbon Cycle: It is the organic circulation of carbon atoms in all the geospheres of the Earth. The cycle involves four major reservoirs of carbon: the atmosphere, the terrestrial biosphere (including freshwater systems), oceans, and sediments (including fossil fuels).

Carbon Sink: It's a natural or man-made reservoir that absorbs and stores carbon for moderate to long periods of time.

Carbon Dioxide Equivalent: It is the quantity of greenhouse gas that has the same warming effect as 1 tonne carbon dioxide.

Carbon Footprint: It is the total greenhouse gas (GHG) emissions caused directly and indirectly by an individual, organisation, event or product measured in units of tonne (or kg) of carbon dioxide equivalent.

Carbon Offset: It is the process of reducing GHG emissions at locations, where it is technically and economically feasible, to compensate for the places where it is not possible.

Carbon Credit: It's the unit with which carbon offsets are measured. One carbon credit represents the reduction of 1 metric tonne of carbon dioxide, or its equivalent in other greenhouse gases.

Carbon Neutrality: When the emissions from one activity are balanced by offsetting emissions elsewhere. It's also known as net zero carbon footprint.

What to buy and what not to