Giants Of The Smart World

Large phone or small tablet, call it what you will, but the growing acceptance of large screens should see the phablet join the mainstream this year

Smartphones with large screens were considered unviable; too big to be a mobile device. But, now, these are among the most sold in the world. When Dell stared the trend in 2010, with its 5-inch Android smartphone Streak, it was criticised for being big and bulky

In 2011, Samsung launched the Galaxy Note. Sleeker and lighter than the Streak, it had a 5.3-inch capacitive display. Even before the industry could come to terms with the Note, Samsung announced that it had sold a million in less than two months. Samsung followed it up with the equally successful Galaxy Note II, which sported a larger 5.5-inch touch display.

With more functionality and processing power being added to smartphones, we are no longer dependent on laptops to access mails, browse the web, play games or handle documents.

However, the smaller display sizes have been a deterrent for people who wanted to do more with their phones. While some found it tough to browse the web on small screens and needed to zoom in to read the text, others struggled with the virtual keyboards on 3-inch screens. The 5-inch, or phablet-sized, screen eliminates these problems to an extent and also adds to the multimedia experience.

"Phablets offer one more option for consumers to access the web. Its larger screen size will definitely encourage consumers to spend more time browsing the Internet using the device as compared with the time they would spend using a phone," says Sunil Kamath, vice-president, South Asia, Opera Software.

Another factor, which is key in the Indian market, is the pricing of these devices. There are already phablets selling for under Rs 10,000 and is a good mid-range option for those planning to buy a smaller smartphone or a larger tablet.

Andre Sommer, marketing and advertising head, eBuddy, says: "Keeping in mind the utility that the fiveinch screen has to offer, we think phablets will get most acceptance in emerging markets, such as in India where people do not have the luxury of owning both (a smartphone and a tablet). We also feel the Android platform will have a greater advantage on phablets and will hold a higher value as it will be a more comfortable experience for its users on the go."

But the phablet and its large screen also has a set of disadvantages. These big devices aren't very good for single-handed operation. Plus, the larger display drains the battery faster. But then, this isn't stopping the segment from growing and could maybe even dwarf the smaller smartphone segment soon enough.

THE FUTURE HOLDS MUCH MORE

With all indicators pointing towards the growing popularity of phablets, almost all major players were also talking about launches in this segment at the Consumer Electronics Show 2013.

Sony Mobile calls its Xperia Z a smartphone, but the 5-inch scratch resistant display means it can be safely categorised as a 'phablet'. The Xperia Z will challenge the Samsung Galaxy Note II thanks to its 1.5GHz quad-core processor and 13.1MP camera.

Meanwhile, Huawei has further pushed the boundaries by unveiling a smartphone with a 6.1-inch screen. The Huawei Ascend Mate will run on a 1.5GHz quad-core processor and come with 32GB internal storage, an 8MP camera and a 4050mAh battery. There is speculation that it will come with a relatively affordable price tag.

The ZTE Grand S is a 4G LTEenabled phablet that will ship with Android Jelly Bean and be powered by a mammoth 1.7GHz quad-core processor. This five-incher too will have a 13MP camera.

Also, let's not forget the Samsung Galaxy S IV, which was first showcased in March. The S IV has a 5-inch Super AMOLED screen with a stellar resolution of 1920x1080. The Korean firm continues to bet on the 'more-is-more' philosophy.

Reports suggest Huawei is likely to announce a Windows Phone 8 handset similar to its 6.1-inch Ascend Mate, which could be the first phablet on Microsoft's latest mobile operating system.

Even Sony Mobile is rumoured to be gearing up for a new device with a 6.4-inch Full HD display.

Samsung is also expected to come up with a third variant of its popular Samsung Galaxy Note.

Apple has already increased the display size of the iPhone from 3.5 to 4.0 inches and people have begun asking if the iPhone too will cross the fiveinch barrier with its next version.

Whatever the device, rest assured that 2013 will be the year of the phablet.

The dominant feature would be the 5-inch IPS LCD display, below which are three capacitive buttons for back, home and menu. The textured finish on the rear panel helps grip the phone, despite the size.

Micromax packs some serious processing power with a 1GHz dual-core processor and 512MB RAM. This combined with Android 4.0 (Ice-Cream Sandwich), makes it easy to use. Browsing the web and watching videos on the big display was a pleasure. But, we would have loved some extra RAM for the device.

The A110 also comes with two SIM card slots, with the second connected on standby mode (when one SIM is active the other becomes inactive).

At this price, the 8MP camera, despite iffy results, is good value for money. While images captured in daylight were decent, low-light shots had a lot of noise. The 2000mAh battery gave a day-and-a-half, which is not bad considering that most smartphones die within a day.

It comes with some useful pre-loaded apps and more can be downloaded from Micromax MStore and Google Play Store. 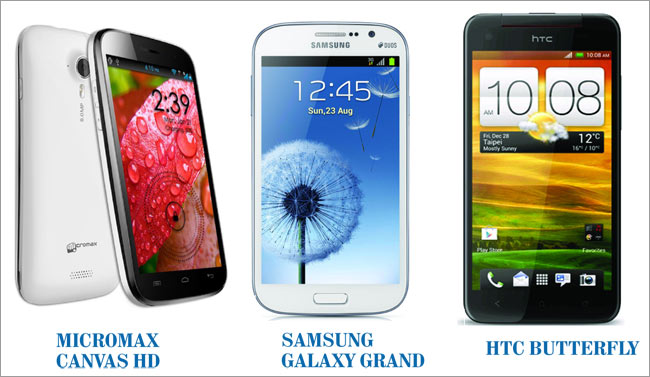 The hot & the not so happening gadgets

The Hot and the not so Happening gadgets