8 stocks to stack after Budget

The Budget may have shaken the markets, but you can still pick some gems from the infrastructure, FMCG, auto and pharmaceutical sectors.

The stock market indices provided all the drama that was lacking in the Budget speech, with the Sensex losing 869 points by the end of Budget Monday. Across the board, companies and analysts were disappointed by the hike in the Minimum Alternative Tax (MAT) from 10% to 15%. MAT is a mandatory tax to be paid by corporates even if a company does not have taxable income due to concessions and incentives. “The increase in the rate of MAT may have an impact on the profits of select companies,” says Narayan S.A., MD, Kotak Securities.

However, it’s not been unalloyed bad news for the markets. Even if Finance Minister Pranab Mukherjee did not make any bold announcements, the increased outlay for roads, irrigation and agrarian projects is expected to benefit companies in the infrastructure space. The continued spending on rural, social development sectors and rationalisation of income tax is expected to help. “To achieve a 9% GDP growth rate, the finance minister has committed significant investments in the physical and social infrastructure. These investments will allow the economy to restrict any further impact of an uncertain global economy. The finance minister has also put more money in the hands of the consumers by withdrawing the surcharge on personal income tax,” adds Narayan.

The government estimates that it will spend Rs 53,100 crore on the power sector in 2009-10. This is expected to benefit smaller companies that erect transmission lines and electrical sub-stations. The 23% increase in outlay for national highways and the 86% hike in funds for urban infrastructure could mean substantial orders for engineering and construction firms.

Increased outlays and the permission to the India Infrastructure Finance Company to refinance loans extended to the infrastructure sector would help smaller companies to raise funds. “Overall, it has been a pragmatic budget with focus on urban and rural infrastructure spending and is geared towards creating domestic demand. This will benefit rural housing and infrastructure and FMCG companies,” says Amitabh Chakraborty, president, equity, Religare Capital Markets.

We take a look at eight companies that are most likely to benefit from Budget 2009-10. Obviously, this is a far-from-exhaustive list, but these companies are likely to be the primary gainers from effective implementation of budgetary allocations.

It is the leading water and irrigation construction player in the country. Its order book of Rs 14,500 crore provides revenue visibility for 2.5–3 years. The orders have seen an annual average growth of 48% in the past five years.

Outlay for the Accelerated Irrigation Benefit Programme has been increased by 75%.

With Rs 14,500 crore worth of order backlog, IVRCL is one of the best mid-cap infrastructure stocks. The Hyderabad-based company is also likely to be one of the major beneficiaries of the government’s increased agrarian spending. With a 75% increase in the budget outlay for the accelerated irrigation benefit programme, analysts expect the company to continue to register robust order inflows. “With the Congress back in power in Andhra Pradesh, the company stands to gain from the continuing thrust on irrigation projects,” says an Indiabulls report. With 68% of the outstanding order book comprising high-margin irrigation projects and 98% of business coming from the government, there are few concerns about the orders being cancelled. From a valuations perspective, it is one of the best picks in the sector due to its superior growth rates and high return ratios.

The allocation for railways has been increased by 46% and for rural electrification by 27%.

The 27% increase in the budget outlay for rural electrification is a positive sign for engineering, procurement and construction companies like KEC International, Jyoti Structures and Kalpataru Power. These companies, which erect transmission towers and build power sub-stations, are expected to be major beneficiaries of the outlay, which has been increased to Rs 7,000 crore. “Such expenditure will improve the efficiency of the state electricity boards and will also benefit construction contractors and power equipment suppliers,” says Kuljit Singh, tax partner, Ernst & Young. Apart from this, the increased plan expenditure on transmission and distribution sectors is expected to create substantial opportunities for the players in this space over the next three years.

With a current order book of Rs 5,163 crore standing at 1.5 times 2008-9 sales, KEC International is seen as the best pick in this space. The company also forayed into the telecom and railway sectors. KEC has seen an average annual growth of 27% in its order book between 2005 and 2009, and is expected to bag more orders from the Power Grid Corporation, which is planning to spend about Rs 20,000 crore on transmission lines from 2009 to 2012. Analysts expect the company to register an annual revenue growth of more than 16% over 2009-11.

With strong execution capabilities and better working capital management, Simplex is best placed to take advantage of the turn in cycle. The company has an order book of Rs 10,100 crore.

The outlay for Jawaharlal Nehru National Urban Renewal Mission has increased by 87%.

With the government trying to fix the chaos in urban infrastructure, companies like Simplex Infrastructure—it undertakes projects like constructing airport terminals, flyovers and metro-rail stations—are doing a roaring business. Simplex is seen as one of the best picks with an order book of Rs 10,100 crore. Its current order book is more than double the 2008-9 revenues of Rs 4,688 crore. Unlike IVRCL, the core strength of Simplex lies in its diversified order book. It generates business from nine different segments in the infrastructure space, which helps it offset a slowdown in any particular business area. “In future, we expect Simplex’s diversified business model to help in reviving the order flow,” says Naveen Jain, an analyst at Reliance Equities.

The shifting of Betapharm’s manufacturing operations to India and the improvement in R&D productivity will help reduce the operating costs. It has tied up with GlaxoSmith-Kline to explore opportunities in emerging markets.

There were no specific budget incentives for the pharma industry, but the BSE Healthcare Index slipped a mere 1.8% compared with the Sensex fall of 5.8% on Budget Monday. This is largely due to the benign tax view taken by the finance minister. The reduction in customs duty on life-saving and bulk drugs is expected to make them more affordable. The best pick in the pharma sector is considered to be Dr Reddy’s Laboratories. The extension of tax deduction for R&D expenditure and lower excise and customs duty for specific drugs is expected to benefit the company. Analysts expect the company’s revenues to register an average annual growth rate of 18% during 2008-11. “Near-term growth drivers and investment for the long-term sustainability of growth make it one of the best Indian pharma companies,” said a recent Citigroup Global report.

Marico’s pricing strength in coconut oil and dominating market share would be a key growth driver. The launch of innovative edible oil products and growing health awareness will also help.

Abolition of FBT will reduce the overall cost of marketing and promotional spends.

The emphasis on agriculture, rural growth and infrastructure is likely to increase rural income. Measures like increased credit flow allocation of Rs 3.25 lakh crore in 2009-10 and a 144% rise in allocation to NREGS are likely to prop up demand for consumer goods. Steps like the abolition of fringe benefit tax could reduce the overall marketing and promotional expenditure of companies like the Hindustan Unilever, ITC, Godrej, Marico and Tata Tea. Marico is seen as a good pick due to its superior growth rate and focus on rural areas. Margins are expected to improve significantly this year due to a fall in the price of key raw materials. The stock is recommended due to its relatively cheaper valuations and high growth rates. 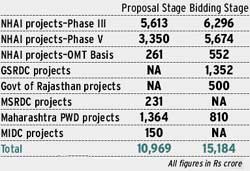 The company expects to add orders for 500 km in the Golden Quadrilateral project. It has pre-qualified (or applied) for Rs 28,000 crore worth of contracts.

The allocation for the National Highway Development Programme has increased by 23%.

While strictly not a budget move, the allocation of the hitherto neglected Ministry of Roads and Surface Transport to Kamal Nath is seen as a positive sign for the sector. “Over the next 12-18 months, we expect profitable road projects to be awarded with a higher concession period of 20-30 years (15-20 years previously) and lesser revenue sharing with the government,” says a Deutsche Bank report. With over 12 BOT (build, operate, transfer) projects under its belt, IRB Infrastructure is a leading toll road operator. The company expects to add orders covering 500 km in the Golden Quadrilateral project. Analysts expect IRB’s consolidated net sales and profits to increase by 83.1% and 60.1%, respectively, in 2009-10.

Is benefiting from low raw material prices. Excise duty and tax benefits on the output from its Haridwar plant will further boost earnings in the medium term.

Hero Honda enjoys a strong franchise in the lowerand mid-price segment and has consistently gained market share over the past decade. It is likely to improve its market position further as it will face few challenges in the executive segments of the market. The company is expected to register a 15% volume growth in 2009-10.

Already a dominant player. With Xylo becoming a success, it is fast gaining market share in the SUV segment. Has higher return ratios than Tata Motors and Maruti Suzuki.

The outlook for the farm division has turned positive as the government has increased its focus on agricultural and rural development. The company is expected to witness around 9-10% growth in 2009-10 volumes. Also, higher production at its Rudrapur plant will reap excise and income-tax benefits. Analysts expect an average annual revenue growth rate of 12% over 2009-11. Increasing subsidiary valuations will also be a trigger for the stock price of M&M.

Going short in a big way