Out of Debt Trap Many domestic companies (mostly midcaps and small-caps) are selling assets and raising equity to pay off debt. While the process has been on for some time, it has gathered momentum of late due to improvement in demand for industrial assets and rise in equity markets, which are ensuring that companies get good value for their assets.

Companies that have sold assets/new shares or plan to do it in the near future include Reliance Communication, Tata Steel , Jaiprakash Associates, Videocon and Ashok Leyland.

According to a Crisil report published on July 7, in the past 18 months, a total of 21 companies have announced 36 deals to sell assets/equity to raise Rs 80,000 crore, which is nearly a fifth of their debt.

"Expected policy reforms and buoyant capital market should lead to more such transactions. We expect companies to raise at least another Rs 60,000 crore in 2014-15," says the report.

Falling debt is good for a company's stock as it improves profitability by freeing up funds. So, as more and more companies line up to sell assets/equity, investors have an opportunity to make good money by buying their shares to cash in on a likely recovery.

The same year, it started the process to acquire REpower, a German wind power company. It completed the acquisition in 2011. This proved to be expensive for Suzlon by making it borrow heavily. Its debt jumped 10 times from Rs 450 crore on 31 March 2006 to Rs 5,162 crore a year later. The interest cost increased from Rs 65 crore to Rs 276 crore during the period.

At the end of 2012-13, the consolidated debt stood at Rs 15,190 crore while interest cost was Rs 1,800 crore, more than its operating profit (sales minus expenditure).

This is not a one-off case. Over-leveraging has led to sharp deterioration in finances of a number of companies. This is especially true after the 2008 global financial crisis, which lowered India's economic growth and made sure that many companies found it difficult to service debt due to shrinking sales and margins.

Among the companies discussed above, as many as 68 (out of 400) have a debt-to-equity ratio of more than two, which means their borrowings are double their equity capital.

Many of these debt-ridden companies were once hailed as emerging stars (Suzlon Energy, GMR Infrastructure, GVK Power and Infrastructure, Jaiprakash Associates) on the corporate horizon. However, many are now struggling to service their debt; some are on the verge of insolvency. Many have opted for corporate debt restructuring, or CDR , under which banks ease the debt's terms and conditions (reduction of interest rate and increase in tenure).

"There has been a sharp rise in the number of companies opting for CDR in the past few years. Approved cases under the CDR mechanism, which caters to roughly 30% stressed debt in the country, have reached $60 billion, up 50% from last year," says Aman Chowdhury, chief executive, Cians Analytics.

Banks have also started facing the heat as companies show inability to service debt. The net non-performing assets, or NPAs, of commercial banks rose from Rs 19,000 crore in 2007 to Rs 94,000 crore in 2013. That's why the strongest push to sell assets has come from banks and other lenders. 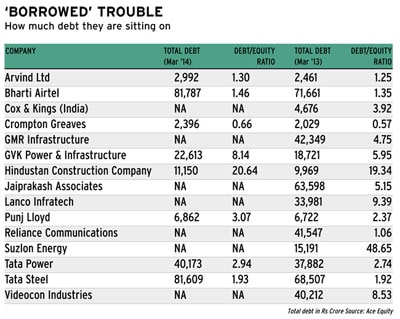 Selling non-core assets seems to be one of the most popular avenues to reduce debt. For example, Jaiprakash Associates wants to sell non-core assets such as a cement factory and some real estate projects and thermal plants in 2014-15. A few months ago, Tata Steel sold its land in Borivali, Mumbai, to Oberoi Realty for Rs 1,155 core. GMR Infrastructure has sold two road projects this year; it is also likely to sell a 40% stake in Istanbul International Airport.

With the economy improving, companies are now getting better value for their assets, which is a big reason for the spike in the number of such deals.

"It's easy to get rid of high-cost assets when they are fetching a good price. Probably it is difficult for these companies to earn a good return on these assets and so they might as well sell them," says Deepak Shenoy, founder, Capitalmind, a research firm.

Another route for raising money to retire debt is sale of equity. Here, the company issues new shares through follow-on offer, private placement or offer for sale or OFS. The promoter's shareholding falls.

Recently, Reliance Communication raised Rs 4,800 crore by selling fresh shares. A part of the proceeds will be used to reduce debt, which stood at Rs 40,000 crore at the end of March. Similarly, Hindustan Construction Company plans to raise Rs 750 crore through private placement of shares.

With sentiment in equity markets turning positive and investors' risk appetite increasing, we may see a flurry of such equity issues. The Securities and Exchange Board of India has also eased norms for companies taking the OFS route.

The other ways of reducing debt are bringing in strategic investors at the project level, sale & leaseback and securitisation of receivables.

Debt is fine as long as the interest rate is less than what the company is earning from its assets. As interest rates rise and the company's return on assets goes down, interest payments can substantially bring down profit margins.

When a part of the debt is paid back, the total interest paid comes down and margins rise. This results in re-rating of the stock.

"As companies reduce debt from extreme levels and improve their debt-equity ratio, investors get confidence in their ability to service debt and deliver returns. For example, the recent issue by an oil services company, which led to 25% equity dilution, to repay high-cost debt translated into a 25% improvement in earnings, driven mainly by savings in interest payments," says S Krishna Kumar, head of equity, Sundaram Mutual Fund. 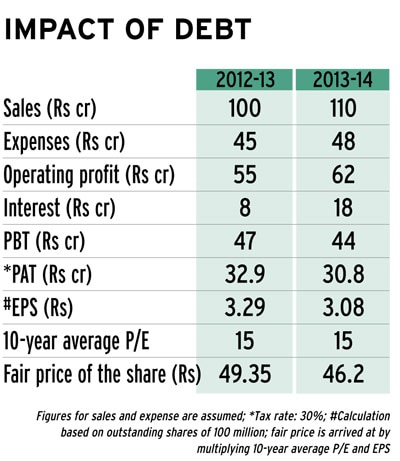 Rs 80,000 crore is the value of assets/equity sold by 21 companies in the past 18 months, according to Crisil

Valuations fall when debt increases without a commensurate rise in return on assets. So, when a company reduces debt, its valuations generally rise as investors factor in an improvement in fundamentals and reduced solvency risk.

Shares of companies that are selling assets or issuing fresh equity to retire debt are good investments. This is because their prices jump sharply after the announcement. But the long-term performance of such companies is in doubt.

The reason for this is that some companies selling assets are heavily leveraged and the amount paid is too small in comparison to the total debt to have any meaningful impact on the stock over the long term. In some companies, the debt could be purely because of stuck projects. Besides, some companies are selling cash-generating assets, which may impact their cash flow, neutralising the impact of lower debt.

"For such companies (which are in debt due to stalled projects), equity dilution will not alter the balance sheet meaningfully. It makes more sense for these companies to tap the market as and when confidence in the macro environment improves and project bottlenecks are cleared," says S Krishna Kumar, head, equity, Sundaram Mutual Fund.

According to him, more than 90% completed transactions involved cash-generating assets. Even after the sale of assets & equity, the debt-to-EBITDA multiple of these companies is expected to improve only marginally from nearly nine times as on 31 March 2014 to just below eight times over the next one year. EBITDA is earnings before interest, tax, depreciation and amortisation.

Khattar of Edelweiss says some of these companies are good trading bets. But he says he will not advise people to stay invested in these stocks for long.

With sentiment in equity markets improving and many companies lining up share sales, it is to be seen if the markets are able to absorb all these equity issues.

According to PVK Mohan, head of equities, Principal Mutual Fund, investors have to be wary of the rush of new equity offers. "They must buy only quality issues."

- Suzlon Energy plans to raise about Rs 1,000 crore from sale of non-core assets in 2014-15. It has already raised more than Rs 700 crore by selling two non-core assets.

- Jaiprakash Associates plans to sell Rs 10,000 crore worth of assets in 2014-15. It has already sold assets worth Rs 15,000 crore in the second half of the previous financial year.

- Tata Steel has sold its Borivali land for Rs 1,155 crore and 4.37% stake in Titan Industries. It also plans to sell 50% stake in Dharma Port in Odisha.

- Ashok Leyland has made close to Rs 400 crore by selling stake in IndusInd and Defiance Testing and Engineering Services Inc, USA

- Bharti Airtel has raised Rs 2,100 crore by selling a 4.5% stake in Bharti Infratel. It plans to sell 3,100 telecom towers in four African countries to Helios Towers.

WHY ASSET SALE MAY NOT ALWAYS WORK

- Proceeds from asset sale may be too small compared to the total debt to have any meaningful impact on the stock price.

- In some companies, debt can be due to stuck projects. In such a scenario, asset/equity sale may not have a significant impact on the stock performance.

- Some of the companies are selling cash-generating assets, which may impact their cash flow, neutralising the overall impact of the cut in debt.

'Indices must be of utility to investors'