The information technology (IT) sector, for long considered a safe bet , has been making investors jittery for the last few months.

Take Infosys Technologies. The sector bellwether has disappointed the market for six consecutive quarters. In fact, while announcing results for the first quarter of 2012-13, it reduced the annual dollar revenue growth guidance to 5 per cent from the April estimate of 8-10 per cent. This was below the 6-8 per cent estimate of most analysts.

Given that Infosys missed its revenue targets in the last two quarters, experts questioned even the "at least 5 per cent" growth target. As a result, the stock fell 10 per cent to its three-month low of Rs 2,219 on July 12, the day the results were announced. This was 25 per cent lower than the peak of Rs 3,000 touched in July 2011.

Although revenue rose 8.6 per cent on a quarterly basis, the rise was mainly driven by rupee fall rather than new business or higher pricing. In fact, the operating margin fell 200 basis points due to fall in prices, higher visa cost and hiring of more locals in foreign countries. The company has temporarily suspended quarterly revenue guidance as clients are taking longer to take decisions. Anand Shanbhag, executive director and head of research, Avendus Securities, says it's an industry trend. The average profit growth of most IT companies has fallen from 25 per cent in the last few years to 10-15 per cent due to slowdown in western countries, competition, currency fluctuation and an already large base.

3 PER CENT
is the return given by the BSE IT index this year till September 10. On the other hand, the Sensex has risen more than 14 per cent during the period.

The company's stock has been underperforming peers of late. "Infosys' focus on consulting and software integration is untimely considering that companies are not expected to avail of these services or buy software packages like ERP (enterprise resource planning) when the economy is weak," says Shanbhag of Avendus.

Within services, consulting/system integration business contracted the most (4.9 per cent) in the first quarter of 2012-13.

"Further, changes at the top management level deflected attention from the business for a while. The company's inability to be more flexible on deal terms (pricing, initial transition costs or upfront investments from vendors) has also affected its performance," says Sinha of Emkay Global.

Although software companies are in the similar business of IT services, different companies follow different strategies across verticals and geographies. Infosys' key markets, for instance, are the US (64 per cent of sales), followed by Europe (22 per cent) and Asia (14 per cent), with financial services contributing 35 per cent to sales.

Although Indian IT companies were US-focused to begin with, analysts say there is limited room for growth in offshoring from the US. Banking in the US has also reached the saturation point and there is not much scope for cutting costs further.

"The demand is coming from maintenance of systems, new regulations, etc, which is not enough to help the companies grow in double digits," says Shanbhag. Sinha says Infosys' price to earning, or PE, valuation of 13 means the stock has a limited downside.

Wipro's revenue from IT services fell 1.4 per cent in dollar terms. One reason for this was a higher-than-expected cross currency impact of $25 million or Rs 137 crore). In rupee terms, sales grew 8 per cent. While profit grew 6 per cent quarteron-quarter or QoQ to Rs 1,600 crore, it was below expectations.

Analysts are not very positive about the company's growth in the next few quarters as 40 per cent of its business comes from investment banks, which are cutting costs due to subdued financial markets in most of the world.

Tata Consultancy Services (TCS) beat peers in the first quarter of 2012-13. In rupee terms, it posted 12 per cent growth in net sales while expanding revenue by 3 per cent QoQ in dollar terms. Revenues from banking, financial services and insurance grew 14 per cent in rupee terms.

The management continues to be optimistic on beating Nasscom's 2012-13 growth estimate of 11-14 per cent. As opposed to Infosys, the TCS management's commentary was highly constructive, especially in terms of decision-making cycles and project ramp-ups.

The stock has delivered 35 per cent return in the last one year.

HCL Technology's revenue grew 13.5 per cent QoQ on the back of a 4.6 per cent rise in volumes. Margins expanded 3.5 per cent QoQ, driven by currency and productivity gains and lower-than-estimated foreign exchange losses.

The company has reported growth in most verticals and geographies in a tough environment, says Sinha of Emkay Global, who is positive on the stock owing to the company's transformation under a new leadership.

The company witnessed a strong 22 per cent growth in the healthcare vertical. Analysts say the company's operating margin of 19 per cent for 2011-12 appears sustainable considering the operational efficiencies from execution of large deals. 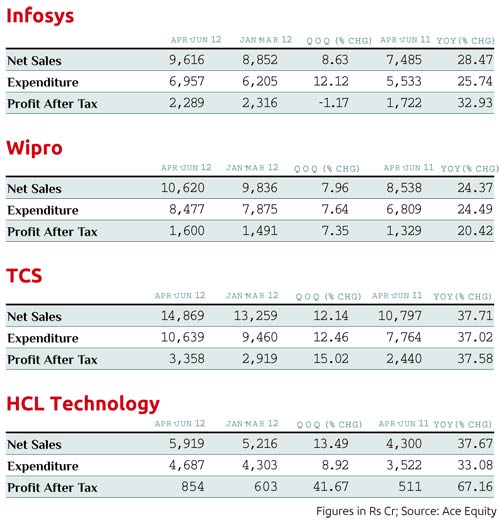 Shanbhag says the next growth push will come from verticals like health care, insurance and manufacturing (the second-biggest user of IT after banking). In fact, health care is facing a situation like IT in 2000 (Y2K) as the industry shifts to a new classification of diseases that will necessitate an upgrade of systems.

However, except Cognizant, no top IT company has more than 10 per cent exposure to the health-care sector.

The other important growth driver will be expansion of geographical exposure. Indian IT companies started with focus on the US market, which seems to be saturating. Analysts expect Asia-Pacific and India to be the next growth engines.

"Europe, too, is well placed considering it is today where the US was five-seven years ago. Europe has been doing a lot of outsourcing, not offshoring, which is likely to grow as companies there focus on saving cost," says Shanbhag.

Each company follows a different strategy across verticals and geographies. Infosys, for instance, has a lower exposure to Europe, which does not augur well for it.

Shanbhag says TCS and HCL have been better at adapting to the current environment than the others; they have grown through acquisition or organic growth.

The Indian IT sector is known to be defensive in nature during trying times. It showed resilience after the 2008 financial crisis by giving 16 per cent compounded annual return between July 2009 and July 2012.

The average profit growth of most IT companies has fallen from 25 per cent in the last few years to 10-15 per cent due to slowdown in western countries.

However, this time one needs to tread carefully and choose stocks using the bottom-up approach. Some IT stocks are still attractive from a long-term perspective.

According to industry body Nasscom, India's IT exports will fall in the year ending 31 March 2013 owing to reduced spending on technology by companies in the US and Europe.

It provided a range of 11-14 per cent for the likely growth in exports from IT and business process outsourcing companies compared to the projected 16.3 per cent growth in the year ended March 2012.

How to respond to negative reports about companies