Going short in a big way

While Dipen Sheth takes a timid stand on Safe Wealth, he aggressively short-sells a bundle of stocks in the Wealth Zoom portfolio — and explains why.

This fortnight we are taking an ‘aggressively timid’ view of the markets. Timid, because we are avoiding any fresh purchases or sales in Safe Wealth, where we have cash in hand to the tune of more than three-fourths of the portfolio. And aggressive, because we are taking up a sizeable short exposure in the Wealth Zoom portfolio. Before you question the choice of stocks, here’s the macro view of why we are shorting. Finance Minister Pranab Mukherjee’s budget will come and go in a day, but the CFO of our country will have to run the finances till the end of the Congress tenure. If my worst fears come true, then throughout this period, the government will have to borrow more and more, just to stay in the same place.

This ‘treadmill’ is likely to push up the interest rates, crowd out private sector borrowing and lead to depressed valuations and profits, even if some sectors were to expand revenues over the next few years. Interest rates have a cascading effect on the economy—at the very basic level, the cost of borrowing goes up and, therefore, profits fall. Apart from this, bond yields increase (leading to sharp writedowns of investment portfolios by banks, resulting in drastically lower profits). The investors, in turn, begin to veer towards debt and money moves out of equities. The PEs crack, so the markets tend to move lower to find prices which correspond to the reduced PEs. 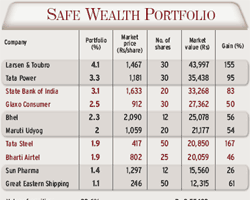 In addition, corporate India has been only too happy to rush into equity issuance after the current, not to mention sharp, pullback, which saw the Nifty rise from 2,700 to over 4,500. If increased global liquidity is, at least, a part of the reason for this (apart from India’s perceived ‘decoupling’), expect the taps to be turned off sometime soon. Monsoon worries and internal security concerns are the other negatives.

Meanwhile, here are the key fresh shorts in Wealth Zoom:

NTPC: Great business, terrific management, long-term growth assured...that is the general perception. But at well over three times the book value, and mandated to earn only 14-15% return on the capital invested for as long as it’s alive, why should NTPC figure on anyone’s buy list? I suspect some sensible people will dump their holdings. 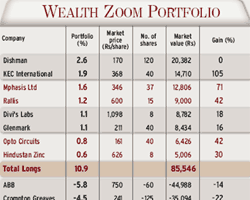 Larsen & Toubro: This is one company where a short really seems anti-national! But one look at L&T’s rich (and stretched about 24 times) valuations tells me that this frontliner can probably be shorted safely, for a while at least, as the budget arithmetic sinks in.

Tata Steel: Probably the most obvious of the shorts, Tata Steel is highly leveraged and vulnerable to international demand for steel. Also, Corus’ low-margin operations threaten to derail the Jamshedpur story. If debt service becomes an issue, we might see a crack back to October lows.

HDFC, Axis Bank: While the former has an unbeatable franchise in its home finance business, the latter is seen as an aggressive high-growth story in the private sector banking space. But at over 4.5 times the book value (and up over 100% from recent lows), would you not short HDFC? Ditto for Axis Bank, which is now kissing three times the book value and up nearly as much from recent lows on asset quality concerns.

Idea: What an idea! At 27 times the single-digit return on equity (RoE), stumbling on a sagging market share and not exactly up to the rapidly growing competition, this is the most compelling sell from the nowmaturing telecom sector.

Suzlon: Another bad boy of leveraging and a concept story rapidly going sour in the face of technical failures. This wind power equipment manufacturer is now on the lookout to sell a stake in Hansen, a gear making subsidiary. In the meantime, the company grapples with financing shortfalls for its stake in RE Power. For a 10% RoE, you can’t be willing to pay over 14 times one-year forward earnings in an uncertain environment. But you can short, which is what I’ve done.

GAIL: Caught on the wrong side of the petchem cycle, its plastics/polymers business should do badly for at least another two years, while gas transportation income is now regulated/capped. So, rising gas volumes (courtesy RIL’s KG gas flowing through its pipes) won’t translate to a proportional increase in profits. Sad, but true. And 17 times the FY10 earnings is a sure sell signal, especially since FY11 earnings are expected to fall further, going by consensus estimates.

Interestingly, of the eight listed long positions in the Wealth Zoom, most stocks have underformed compared with the previous fortnight. The lone exception is Mphasis Ltd. The biggest loser is Glenmark, which lost nearly 15%. But there is no need to short this one...yet.

8 stocks to stack after Budget