The fall in the price of the yellow metal is impacting gold loan companies. We explain what went wrong with this once fast-growing business
Tanvi Varma/Money Today | Print Edition: May 2013

Their strong run over the last few years made them look like set for exponential growth for a long time to come. For the last few months, gold loan companies have been struggling to come to terms with the harsh market reality .

Gold loan financiers expanded business at an astronomical pace in 2010 and 2011 as gold's price zoomed and more and more people pledged the metal to avail of cheaper loans.

India's largest gold finance company, Muthoot Finance, for instance, grew its loan book at 68% a year between March 2005 and March 2012. However, in the last one year, the growth has been flat. 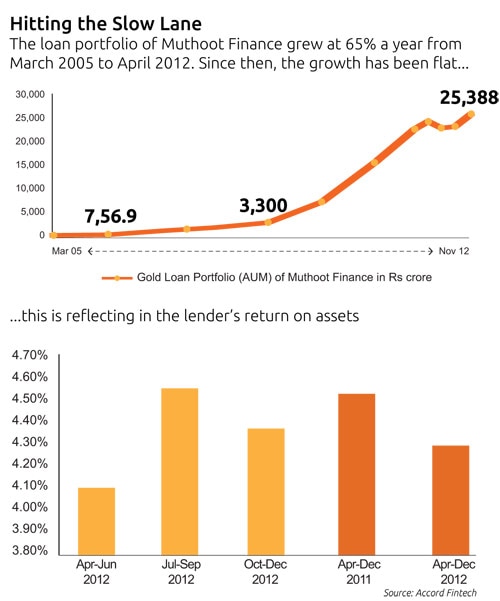 V Vijayakumar, investment strategist, Geojit BNP Paribas Financial Services Ltd, says the crash was triggered by company guidance that it is facing an under-recovery of Rs 250 crore and will, therefore, take a Rs 50-crore hit in the fourth quarter of 2012-13.

"They revised their fourth-quarter estimate from a profit of Rs 90 crore to a loss of Rs 50 crore in a matter of six weeks. The stock will take time to recover even after it has fallen close to all-time lows," says Rakesh Tarway, vice president, Motilal Oswal Securities.

"The Muthoot Finance stock has also underperformed because there will be impact of the developments on all companies in the sector and Muthoot is the largest of them," he says. First, the Reserve Bank of India, or RBI, got worried about these companies' fast growth and business model, which is exposed to movement in gold prices. Hence, it capped the loan-to-value, or LTV, ratio, the part of gold value that can be given as a loan, for non-banking finance companies, or NBFCs, from 75% to 60%. It also banned grant of advance against bullion/primary gold and gold coins.

Earlier, an NBFC could have lent Rs 75 for collateral worth Rs 100. Now, this amount is Rs 60. This means the interest earned on the total amount will be lower. Earlier, a gold finance company could have earned Rs 15 (@20%) on a loan of Rs 75, but now it will earn only Rs 12.

Further, NBFCs whose main business is gold loans (such loans account for 50% financial assets) were told to have a Tier-l capital of 12% by 1 April 2014. "These regulations were aimed at containing risk and securing the increasing exposure of banks and public (via debentures) to these companies. The result is sobering of growth and profitability," says Rajiv Mehta, assistant vice president, research, IIFL.

These new rules hit the companies badly as they were disbursing loans at 75-90% LTV. "Profitability has been depressed due to fall in lending yields, higher cost of funds and negative operating leverage," says Mehta. Manappuram Finance, for instance, saw its net profit for the quarter ended 31 December 2012 fall 48% to Rs 84 crore from Rs 161 crore in the year-ago period. The fall in income during the period was 19%.

"While the business is still in the transition mode, it is clear that the return on assets, or RoA, is likely to settle at much lower levels, impacting earnings growth and valuation," says Mehta.

To make matters worse, the LTV cap coincided with a fall in gold prices globally and tighter bank funding. A fall in gold prices not only lowers the amount that can be lent but also increases the risk of default. "If the price of gold rises, it is beneficial for these companies, but if it is falls drastically, it is very negative as the probability of borrowers defaulting rises, adding to the non-performing assets (NPAs)," says A K Prabhakar, senior vice president and head of equity research, Anand Rathi Financial Services. For instance, Muthoot Finance's gross NPAs were 1.5% in the third quarter of 2012-13 compared to 0.57% in the year-ago quarter. The most vulnerable are loans given before February 2012 when both gold prices and the LTV ratio were high. "Such loans have become vulnerable to default as the principal plus accrued interest surpasses the value of the collateral," says Mehta of IIFL. Here's how it works. At 20% interest rate, a finance company will collect Rs 90 on a loan of Rs 75 after a year. If the value of the collateral falls to Rs 90, the borrower has an incentive to default.

That is why if gold prices continue to fall, the gross and net nonperforming loan ratios of gold loan companies will rise between the third quarter of 2012-13 and the second quarter of 2013-14 as more and more loans are recognised as non-performing.

However, Vijaykumar of Geojit says this trend need not continue for long, as all major players like Muthoot and Manappuram are now strictly complying with the 60% LTV cap, which gives a big safety margin against any steep fall in gold prices during the loan tenure. More important, they are now following healthy practices such as collecting the interest amount every month.

Also, lending against gold is considered safer than other forms of lending due to presence of collateral. "Further, gold is held as a family asset and has a lot of emotional value," says Rakesh Tarway of Motilal Oswal. This means people like to take back their pledged gold even if it does not make much economic sense.

Tighter rules for NBFCs means banks are emerging as new frontiers for gold loans as they can lend at a much higher LTV ratio. This is leading to shift of business to banks. To counter this, gold loan companies have started adding making charges to the value of gold (valuing jewellery at replacement cost), in the process disbursing a higher amount (70-75% of gold value).

Banks have other advantages as well. Loans against gold are considered priority sector advances. Hence, while NBFCs offer these loans at 18-24% a year, most banks charge 11-15%. State Bank of India, for instance, offers gold loans up to Rs 1 lakh at 13.95% per annum. Banks accept both gold ornaments and gold coins while NBFCs accept only jewellery.

Gold loans are not bad considering that the interest rates are usually lower than that on personal loans. However, the maximum amount banks can lend against pledged gold is Rs 10 lakh; some gold NBFCs, on the other hand, lend up to Rs 15 crore. Also, companies like Muthoot Finance offer different rates depending upon the loan tenure. A loan of Rs 1 lakh for three months comes with a 15% interest rate while the rate for a three-six months loan is 18%. The rate for one year is 21%.

Gold loans come in many forms. For instance, you can avail of a term loan under which you are lent on the basis of the gold pledged, or you can take an overdraft loan where a fixed amount is sanctioned and you are charged on the basis of the amount that you decide to take (you can do so in phases).

The impact of the changing regulations has been bigger than estimated, driving downgrade in 2012-13 and 2013-14 earnings estimates and leading to volatility in stock prices. After having said that, it does not make sense for retail investors to exit now as all the negative news has been priced in the stocks.

Mehta of IIFL says investors will be better off staying away from these stocks till the business models are adjusted according to the new market conditions so that a credible earnings estimate can be projected.

However, a government panel, the KUB Rao Committee, has given hope to gold NBFCs. According to the CRISIL report, the committee's recommendation on standardisation of valuation of gold and increase in the LTV cap from 60% to 75% will help gold loan companies increase business volumes at a reasonable pace, although the pace of growth is likely to be much lower than the over 120% a year witnessed over the last three years.

Further, as banks enjoy a competitive advantage over NBFCs, and given the healthy risk-adjusted returns and growth prospects in the gold loan segment, banks could step up the pace of growth of gold loans. Were this to happen, the market share of NBFCs in gold loans may not increase from the current 28% (as on 31 March 2012).
Tags: gold price | invest in gold | buy gold | gold loan | gold loan companies

How to place stock orders and benefit from them