Time to Take a Glance

Like an idea whose time has come, stocks of mid-cap and small-cap companies, which had to bear most of the brunt of the market slowdown last year, look ready for a turnaround in 2012.

Consider this: In the last one year, that is, between January 2011 and January 2012, mid-cap and small-cap indices slumped 15 per cent and 24 per cent, respectively, compared to Sensex's 6 per cent fall. In fact, the profit after tax, or PAT, growth of companies in Nifty and Sensex was 5.9 per cent and 6.6 per cent, respectively, in the second quarter of 2011-12, while mid-caps showed only 3.3 per cent growth.

Swapnil Pawar, chief investment officer, Karvy Private Wealth, says when the going gets tough, small-cap and mid-cap companies suffer the most due to low pricing power and weak balance sheets. Deterioration in their profitability is steeper, which is reflected in stock prices.

In the last three years, when stock markets faced a lot of uncertainty starting with the global financial crisis of 2008, the mid-cap and small-cap category underperformed the broader market.

According to a report by Emkay Global Financial Services, after 2008, that is, between the first quarter of 2008-09 and the second quarter of 2011-12, the average PAT growth of companies in the National Stock Exchange Mid Cap Index was 11 per cent compared to 14 per cent in the earlier period, that is, the third quarter of 2006-07 to the fourth quarter of 2007-08. Even the top-line growth fell. 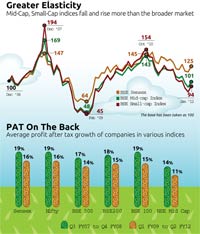 The Reserve Bank of India, or RBI, has increased interest rates 13 times since March 2010 to control inflation. This has increased the cost of funds for consumers and companies and hit demand. In such a situation, while large companies can still access funds at a low cost due to their sheer size, the mid-cap and small-cap companies are not so fortunate.

"Second-rung companies are seeing extended working capital cycles due to pressure from large companies and higher debt cost which banks find it easier to pass on to them," says Shenoy. Further, consumers stick more with large brands unless the price difference with the smaller brands is significant

"To add to it, the fall in operating profit has been magnified at the profit level due to ballooning interest payments," says Shenoy. This becomes a vicious cycle; with market price to earning, or P/E, falling, the P/E contraction in mid-cap/small-cap stocks is larger as investors prefer the relative safety of large-caps.

THE BADLY-HIT
If we look at specific mid-cap and small-cap stocks, those in real estate and infrastructure sectors have been hit the most, the main reason being high interest rates.

"Problems over environmental clearances and land acquisition have added to the problems," says Pawar.

Real estate company HDIL, for instance, saw net sales and PAT fall 60 per cent and 73 per cent, respectively, in the September 2011 quarter. Its stock has fallen 70 per cent in the last one year. Lanco Infratech has fallen 84 per cent. IVRCL saw flat growth in net sales in the September 2011 quarter while its profit fell from Rs 23 crore to Rs 8 crore. Similarly, mid-cap engineering company Voltas reported a 60 per cent fall in profit. 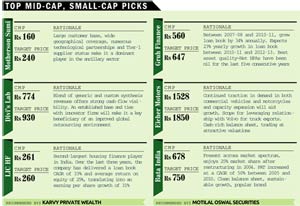 However, some mid-cap and small-cap stocks have done well in the September 2011 quarter.

These include stocks of a number of information technology (IT) companies such as Mindtree, which posted an adjusted profit growth of 135 per cent, followed by Tech Mahindra, which expanded profit by 59 per cent, according to a report by Emkay Global.

Pharmaceutical stocks such as IPCA Labs and Jubilant Life Sciences showed adjusted PAT growth of 61 per cent and 55 per cent, respectively, compared to a year ago. Pawar says if the sector is growing fast overall, some mid-cap companies in that sector may grow fast as well.

This explains the strong performance of mid-rung IT companies, which have benefited from rupee depreciation, and Tier-II pharmaceutical companies. Having said that, experts say the biggest driver of stock market returns in the mid-cap space is how quickly a company can scale up and become a significant player. That is why it is important to pick-and-choose stocks and not follow a sectoral trend.

During the period, the Sensex was up 113 per cent, while BSE Mid-Cap and Small-Cap indices rose 141 per cent and 163 per cent, respectively.

Once the economy normalises, mid-cap and small-cap stocks will go back to the high growth phase.

Pawar says once the economy normalises, mid-cap and small-cap stocks will go back to the high growth phase and start delivering better returns than the large-caps.

Having said that, investors should put faith in companies that are aspiring leaders in their fields, say experts. Pawar says companies in non-banking finance company, health care and engineering sectors look attractive at current valuations. Further, investors need to look at the quality and stability of a company's cash flows.

The dividend record suggests management's will to reward shareholders. Further, there are quantitative parameters that affect the performance of a stock. Prabhakar says one must go for a low debt ratio (preferably less than one), a high interest coverage ratio (>3x, though it depends on the business model), a high return on equity, and also see if the company has any liabilities in the form of foreign currency convertible bonds or external commercial borrowings.

Apart from these, the quality of the management, governance standards and how investor-friendly the company is, matter, he says.

INVEST FOR LONG TERM
Mid-cap and small-cap companies can be future leaders, so one must be patient with one's investments. The worst may not be over and over the next two-three quarters, slowing top-line growth and less-than-expected easing of commodity prices can keep margins and earnings under pressure. Shenoy says mid-cap and small-cap stocks are like wine and give the best results when owned for long periods.

Mid-cap, small-cap stocks are like wine and give the best results when owned for long periods.

Having said that, business fundamentals can change any time and one must be nimble-footed and have the ability to cut losses if estimates go haywire.

"Entry during panic adds to the returns from equities and this is more true for mid-caps and small-caps," says Shenoy.

If you have the expertise and time to track these stocks, you can invest directly. However, if you want to passively partake in the growth offered by these companies, you can invest in an exchange-traded fund or an index fund, like the one offered by Motilal Oswal Mutual Fund, which replicates the holdings of the CNX Mid Cap index.

But if you want active fund management, there are a large number of mid-cap and small-cap funds offered by mutual fund houses. Choose a fund with a good pedigree and record.
TweetYoutube

Best stocks of past 6 months