Is it time for stock shopping?

The Nifty's rise since February is likely to end. The ensuing correction will present a good opportunity to buy stocks.

'The market will do what it has to do to prove the majority wrong,' goes the saying. It came to pass after the budget, when history dictated that there be no upside. However, the deluge of FII funds cocked a veritable snook at experts to push the Nifty to a new 24-month high. By itself, the budget has lost its relevance, and while hype may attract eyeballs, the actual impact is nominal because too many decisions are taken through the year. This time around, the sheer relief of not having a problem budget has led to a welcome rally, aided no doubt by overseas cues.

The Nifty has risen nine weeks in a row, making it difficult to digest in terms of sustainability. True enough, the first rumblings seem to be on the horizon. The index moved from an intra-day low of 4,675.4 on 8 February to an intra-day high of 5,399.6 on 7 April, crossing a slew of resistance levels without too much effort. But this mini-marathon is expected to result in a much-needed (read, overdue) correction, which seems to be on the anvil. The 5,410 and 5,455 marks are important long-term resistance levels, and it would be surprising if these were crossed at the first attempt by the Nifty. 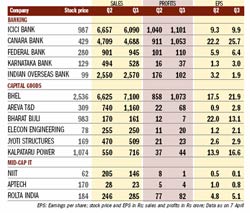 Click here to Enlarge
Some of the daily mechanical indicators, such as the MACD (Moving Average Convergence Divergence), have given a crossover sell signal after reflecting negative divergence, thereby heightening the fear of a probable decline. The same resistance levels would now act as support. The Nifty remains above its support levels of 5,303, 5,274, 5,224, 5,155 and 5,080, while resistance comes in at 5,330, 5,410, 5,455 and 5,562.

Not only is the market looking overbought in the short term but is displaying a distinct weakness. Unless there is a weekly close above the 5,455 level, a negative trend seems in order. The medium-term picture would seem to suggest a buy (read, investment) opportunity in this impending fall.

If one were to consider a retracement of 38.2 per cent of the entire aforementioned rise, it would come to the 5,119 level, while a 50 per cent retracement would imply a level of 5,032. Simply put, the Nifty could decline to a level of 5,032-5,119 assuming the correction sets in along expected lines. This will make it imperative to formulate a buy strategy at the stated levels. 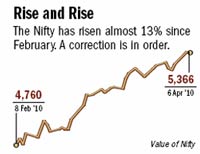 A sector-wise analysis based on technical parameters would seem to indicate that the BSE Bankex is susceptible to a correction keeping in mind the brilliant rise that it has seen. But the long-term picture seems bullish enough to warrant investment at lower levels, especially with a 2-3 month time frame. An outstanding investment opportunity in the banking sector is offered by Canara Bank, Federal Bank, Indian Overseas Bank, Karnataka Bank and ICICI Bank.

The BSE Capital Goods has been an underperformer of sorts, but is probably making all the right noises to make amends for its lacklustre performance. A weekly close above the 14,510 level (BSE Capital Goods Index) would mean an upward breakout after a 10-month consolidation phase, while a decline preceding this anticipated breakout seems to be on the cards. An outstanding medium-term investment opportunity is offered by Areva T&D, Bharat Bijli, Elecon Engineering, Bhel, Jyoti Structures and Kalpataru Power, while Bharat Electricals Ltd seems to be a clear weak spot.

The technology sector was one of the first to revive and has been instrumental in leading the market. The BSE IT Index has witnessed a superb rise from 1,987.81 in February 2009 to a high of 5,575.59 in March 2010, making it an ideal candidate for profit booking. The mainline stocks in the sector, such as Infosys Technologies, Oracle, Tata Consultancy Services, Wipro and HCL Technologies, seem set to decline from here, while paradoxically, some of the smaller ones like Aptech, NIIT and Rolta India, look like good investment ideas.

In effect, a 4-5 per cent correction (from the Nifty's recent high) cannot be ruled out over the next few weeks. This makes it an opportunity to buy, while select mid-cap and small-cap stocks would continue to outperform.

The art of comparison