It's back to square one

From 10,500 to 10,500. It looks like the Sensex has come full circle in two years. But there could be more pain ahead as the past bear phases have lasted one to four years.

Two years ago, just a few months before the first issue of Money Today hit the stands, the Sensex touched 10,565. At that time, breaching the psychologically important 10k barrier was cause for much celebration. For the next 40 months, despite occasional hiccups, the index climbed steadily till it touched a high of 20,873 in January this year. Everyone waited breathlessly, hoping the climb would continue. But that was the tipping point. Today, as these pages go to the press, the Sensex is back to its March 2006 level. In eight months or so, it has lost close to 50%.

If you’re a sanguine investor, you might like to believe that there’s nowhere for the index to go but up. Or, you might want to believe that things have come full circle and that the Sensex will cross 20,000 soon. Unfortunately, marketwatchers think otherwise. Many of them have gone on record saying the key indices are likely to slide more before they recover.

But India is not alone. The world’s markets are on a slippery slope and every day brings more depressing news. Most of the worstaffected countries are facing a combination of economic and financial crises. The Indian economy seems stable enough to weather this storm. Can we say the same of the Indian markets?

What’s puzzling most people is why this has happened just when the most sceptical of investors had started believing in the India growth story. It’s largely thanks to the FIIs or foreign institutional investors, which have been taking money out at regular intervals from the emerging markets in the past 10 months due to the subprime crisis.

For instance, in June 2008, they sucked out over $2.6 billion from India. High net-worth investors, domestic institutions, traders and players take their cue from the FII movement, regardless of the fact that what drives these institutions might not apply to them. It’s mob behaviour at its worst—with similar disastrous consequences.

No, we haven’t forgotten the companies that are the bedrock of the markets. These companies and their promoters add to the noise by deciding how many players they want in the game at any given point. Add to this mix the regulators, banks and the economy as a whole. And what’s the game? Chinese whispers.

Click here to Enlarge
If the economy falters for a nano-second, it becomes a severe liquidity crisis or a slowdown, even a recession. The regulators are forced to take notice of this noise and often press the panic buttons to try and restrain the ensuing hysteria. In this situation, the small investor is chewed up and spat out by the system; the gargantuan FIIs go scot-free.

However, when the FIIs leave due to trouble in their home countries or sectors (like the metals meltdown in mid-2006) or redemption pressures, they cause the market to totter and stumble. At these points, domestic institutions step in to try and change the market’s course. For instance, in August 2007, when the participatory notes issue came to a head and the FIIs left en masse, domestic institutions, mutual funds and insurance companies stepped in to arrest the fall. Or were they forced to do so by the Indian policymakers?

The fact is that the market has managed to perplex even the professionals. We’ve tracked what just one market expert, who works for Religare Securities, said at various points in time, and his statements tell their own story. 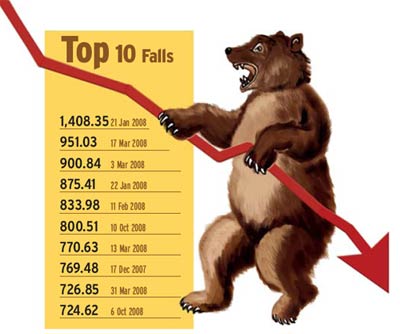 In January 2008, soon after the crash, he said, “We believe the market is trying to find a bottom. The US recession has caused risk aversion, so a few FIIs, especially hedge funds, have sold. We believe this weak market will stabilise, and if volatility is reduced, the market will recover.” Two months later, in March: “The market is clearly trying to find a bottom, and taking cues from overseas…The fourth quarter results due in April hold the key. Meanwhile, the market might test the previous low of January.” And on April 1: “Markets are showing significant signs of weakness.”

You’d think this would have taught small players to be circumspect while entering the market. However, emboldened by the manner in which the domestic institutions balanced out the FII movement, these players began behaving recklessly. Small players, with a few thousand rupees that they could illafford to lose, began playing with complex instruments like futures and options.

Some of them gambled and won and that encouraged more people to enter the derivatives arena. As the sensitive market indices started on their dizzying climb, more and more small players hopped on for the ride. And then, like a large wave, the markets crashed. With expected results: the institutional players were either large enough to stay unmoved or nimble enough to get out of the way in time. The small players, however, were crushed, and it seemed cruel at that point to explain that they had only themselves to blame.

The regulator and the government stepped in to try and prevent worse carnage, but the crash was caused by reasons beyond their control: the US subprime crisis and its effect on the rest of the world. The result? A bear market, or something close to it. In previous bear markets, retracements have not ended at these levels.

In both 1992-93 and 1994-98, the market shaved off around 71.3% of the gains of the previous bull market. So there is reason enough to believe that the Sensex is yet to reach its bottom. The previous bear markets have lasted anything from one to four years; this bear phase is just about eight months old. Also, remember, that there is usually a definite correlation to the business cycle, with the market leading GDP growth patterns. If this bear market lasts longer, we will almost certainly see a further drop in values.

But what happens after that? A recovery phase has to set in at some point. Till then, we suggest that the investors look for firms that have high forex earnings, under-valued companies and even trade during temporary bullish phases.

When you’re tempted to follow the example of the giants or when you want to enter the market when it’s still down, ask yourself three questions: how much downside do you see? How much upside do you see? How long will it take for an upward move to take place? Only if you’re able to answer these should you think of entering the arena.

A guide for investors

Finally, time to get greedy