The recent rally in IT sector stocks is likely to continue for some more time
Tanvi Varma/Money Today | Print Edition: October 2013 India's IT sector, crippled by the global financial crisis of 2008, is getting back on its feet. The result: Most IT companies have been shining in what has been a gloomy period for the country's economy as a whole.

The S&P BSE IT Index rose 38% in the one year to September compared to just 5% rise in the Bombay Stock Exchange, or BSE, Sensex. This is reflected in the performance of sector funds. The category has returned 30% on an average in the last one year, the best among all sector funds. SBI IT and Franklin India Infotech funds have returned 33% and 32%, respectively, during the period.

Gopal Agrawal, chief investment officer, Mirae Assets Global Investment India, says there are many reasons for the rally- expanding order books, rising spending on IT in the developed world and fall of the rupee against the US dollar (which increases rupee earnings of companies that earn in dollars).

These factors are likely to play a key role in the performance of IT companies for the next few quarters.

According to a report by Credit Suisse, the revenue growth of large and mid-cap IT companies picked up in the June quarter. The top five grew at 14% while the mid-caps reported 8% growth.

In the first quarter of 2013-14, Infosys, for instance, beat analysts' expectation by posting a 2.7% rise in dollar revenue as against the expectation of 1% growth.

"They appear best positioned to take advantage of the current positive triggers; these lend reasonable earnings visibility to large IT companies over a three-year time frame," he says. Also, in the medium term, companies with diversified business models (in terms of verticals and geographies) and focus on the high-margin segments should do well. 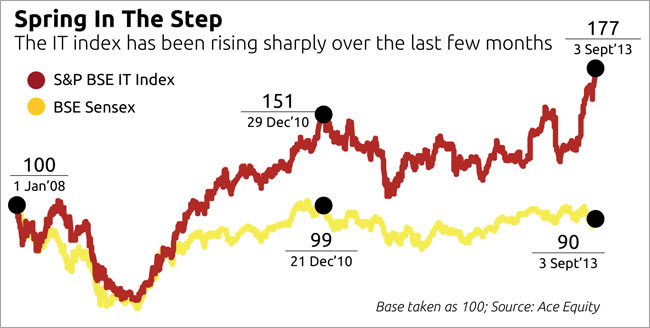 The sharp rise in the BSE IT Index can be attributed to large-cap stocks such as Infosys, TCS and Wipro which have risen 30% year-to-date. The mid-cap stocks have risen only 5-10% during the period.

The stellar performance of SBI IT Fund has been helped by 37% exposure to Infosys, followed by 28% to TCS, as on July 31. Franklin India Infotech fund's allocation is also on similar lines. It has invested 40% funds in Infosys, 36% in TCS and 10% in Wipro.

"Further, foreign and domestic institutions have increased allocation to the sector as volume visibility and favourable rupee movement have led to earning upgrades," says Agrawal.

In the quarter ended June, the sector-wise change in holding by foreign institutional investors, mutual funds and banking & financial institutions in the technology sector was almost 30% (out of a net investment of Rs 13,200 crore).

IS THERE MORE STEAM LEFT?

If you go by a Credit Suisse report, the answer is yes. One reason is improving demand. Typically, margins of mid-sized companies are more leveraged to revenue pick-up given their small scale. Going forward, as the price to earnings, or P/E, ratios of large IT companies expand-Infosys is trading at 17 times and TCS at 20 times 12-month forward PEs-investors will be attracted to the single-digit multiples of mid-sized firms. This will give these companies a chance to beat their larger peers in returns.

Although Shah of Kotak is positive on large-cap IT companies, he will prefer to buy on declines. In the mid-cap space, he says, KPIT Cummins and NIIT Tech can be good bets. The two are trading at 8.7 times and six times 12-month forward earnings estimates.

However, there is always an element of unpredictability in stocks of smaller companies given their lack of scale-one large customer that defers spending or a large project that gets cancelled can badly hurt both earnings and stock prices.

How much will IT companies gain from the rupee fall will be clear in the next few months. As a general rule, every 100 basis points, or bps, rupee movement impacts operating margins of IT companies by 30-50 bps. In this market, Dhananjay Sinha, head of research, Emkay Global, likes companies that have pricing power, increased market share, balance-sheet strength and ability to gain from a weakening rupee.

Among the large-caps, he likes Infosys, while his favourite in the mid-cap space is MindTree. The reasons are these companies' supreme positioning in the industry, strong fundamentals and expectation of sustained growth in the coming quarters. The future will depend upon factors such as growth in the developed world (which will impact order flow), new US immigration laws and the value of the rupee.

Agrawal is cautiously optimistic as corporate profitability in developed world is expected to expand IT companies' order books. "Although we can see a correction when the rupee stabilises or reverses the trend, as long as the US and Europe remain stable or grow, IT stocks will find support at lower levels," says Shah.

Further, the current environment, especially the falling rupee, will help companies take a long-term view on deals, boosting growth. "Indian companies have also been scaling up their focus on Horizon 3 services (Social, Mobile, Analytics and Cloud), and given the strategic nature of these projects for their clients, this business could be relatively stable," says Franklin's Sivasubramanian.

Investors who want to take exposure to the sector can do so via individual stocks suggested by experts or through sector or thematic funds. However, the exposure should depend upon the risk profile and time horizon, and not exceed 10% of the total portfolio.

Sivasubramanian says like any sector fund, investors should use technology funds as a topping to the core portfolio. Ideally, one should buy gradually through a systematic investment plan, as IT companies provide a hedge against falling rupee and poor performance of the domestic economy. "If investors cannot make these decisions, they can go for diversified funds, where fund managers take calls based upon the outlook for each sector," says Agrawal. 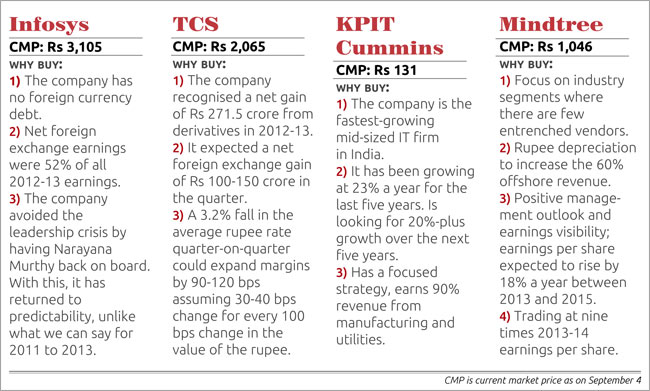 Tips to invest in auto stocks amid slowdown