As markets show signs of bottoming out, Dipen Sheth goes shopping for value picks and weeds out three spectacular duds.

It’s clean-up time, folks. We have selectively purged the poison (a few junk stocks) out of our model portfolios. As your fund manager, I humbly accept the allegation that I chased momentum and burnt my fingers, along with your cash. Given our high cash position in Wealth Zoom, we are selling only those stocks in which I see no hope of recovery after the results season. The stocks we have thrown overboard are Hinduja Ventures, Ratnamani Metals and Numeric Power. 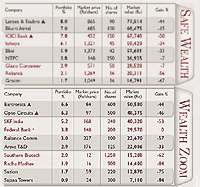 Click here to Enlarge
To be sure, there are other equally spectacular duds in Wealth Zoom (an absolute misnomer for our mid-cap portfolio). But there’s no hope for the star duds that we have sold. For example, the cash rich Hinduja Ventures has reported cleverly reformated results that confuse recurring earnings from its media business (cable distribution) with one-time profits on sale of shares in its media subsidiary (to an unidentified buyer). Ratnamani Metals has reported declining margins and seems to be a treadmill, while Numeric Power’s profits for the quarter have fallen by over 50% year-on-year.

Instead, we have added to our positions in Bartronics and Opto Circuits. We are thus averaging our way into high-conviction ideas that have delivered decent numbers and are currently languishing in severely undervalued territory. Bartronics’ sequential fall in profits from Rs 23 crore in the first quarter to about Rs 20 crore in the second quarter is okay. This fall can be explained due to the start-up costs of backward integration into chip manufacture for smart cards, while its US and Singapore businesses roll on. Similarly, Opto (after a 7-for-10 bonus) has posted an over 20% rise sequentially compared with the first quarter and is now available for as cheap as 8 times the 2008-9 earnings.

Other pathetic performers in Wealth Zoom such as Radha Madhav, Sujana Towers and Southern Biotech are being retained just because yours truly is on the verge of getting updates from their managements. If they can’t present decent arguments within the next fortnight, prepare to see some more merciless purging. What else do you expect me to do in a portfolio that rose by 60% only to fall by over 33% in 10 months? Let’s hope your ideas help me atone for my sins.

We have booked a 2.5% absolute gain in both the portfolios for the 90-day positions in the fixed maturity plans (FMPs), which is in line with the 10% per annum yield being currently offered for fixedincome products. Wealth Zoom had also carried an FMP investment (of Rs 3 lakh) and this, too, has got converted entirely to cash.

Safe Wealth, on the other hand, continues to look respectable (though damaged) with an NAV of 9.74, which is actually 3% higher than last fortnight. This has partly happened due to the profitable sale of the large (Rs 4 lakh) position in the FMP, which matured on 30 October. It’s also because of a desperate set of measures undertaken by RBI to loosen liquidity and bring down lending rates in the recent past.

Will the triple whammy of CRR, SLR and repo rate reduction work? It will give some short-term thrill, as it no doubt has, but the big picture on long-term investing is still not clear for Indian equities. The fallouts of the global credit crunch are still panning out, week after agonising week, in almost every leading economy.

Failing banks, crashing commodities, political unease (not withstanding Barack Obama’s thumping victory in the US presidential election), the onset of recession in the countries that represent over 50% of global GDP, and the fear of policy errors by a government in an election mindset in India do not inspire any genuine long-term buying.

Still, purely for some more averaging (and, I dare say, to look busy and clued-in), we have added small quantities (50% of our last published holdings) in ICICI Bank and Larsen & Toubro for the Safe Wealth portfolio. But with 66% cash in Wealth Zoom and 56% cash in Safe Wealth, your fund manager isn’t quite sure about where he should invest! As ever, your ideas and comments (especially criticism) are welcome.
TweetYoutube