The market's disinterest in the stock was prompted by the electricity regulator, Central Electricity Regulatory Commission (CERC), move to institute stringent tariff norms for 2014-15 to 2018-19. The share price of the company touched Rs 112.60 on February 28, 2014.

Adverse provisions in the draft norms relate to shift of incentives to plant load factor (PLF) from plant availability factor (PAF), further tightening of operating norms and grossing up of tax at the effective tax rate have been retained. Earlier, it was believed that in the final regulations these provisions may be diluted following representations by the NTPC management.

PAF measures the generation capacity that is available, whereas PLF is based on the actual power that is generated at the plant.

As per current regulations, if the PAF is maintained above 85% the fixed charge goes up proportionately even if there has not been any offtake and therefore the generation companies can recover their fixed costs. However, in the final regulations, CERC has changed this to PLF based where the generation company will get an incentive of Rs 0.50 per unit of power generated if it maintains the PLF above 85%.

This means, if power procurers do not purchase from NTPC and it does not run its plants at 85% capacity, it will not be entitled to incentives. NTPC earns incentives of Rs 650 crore on PAF which will no longer be available from April 1. Only six of NTPC's 15 plants operated at a PLF above 85% in 2012-13, primarily due to fuel supply constraints and back down by distribution companies.

Sanjeev Zarbade, vice president, private client group research, Kotak Securities in a research report says, "This is another significant negative for NTPC as in earlier norms incentives were paid out based on PAF. Given the chronic coal shortage especially for plants commissioned after 2009, the PLF would remain depressed. These regulations would impact 2014-15 EPS by nearly 18% for NTPC and the core ROE could potentially decline from 24% to 16-17% after these norms come into effect. According to HDFC Securities, this can lead to under recovery of fixed costs and also lower incentives as PLF across the country has come down.

In another regulation, the regulator has also decided that the tax to be grossed up on actual basis. According to a report prepared by Chirag Shah and Anuj Upadhyay, analyst, ICICIdirect.com, the final 2014-19 tariff order by CERC will negatively impact NTPC's core RoE by nearly 700 basis points to 16% in FY15E (FY13 - 23.5%). 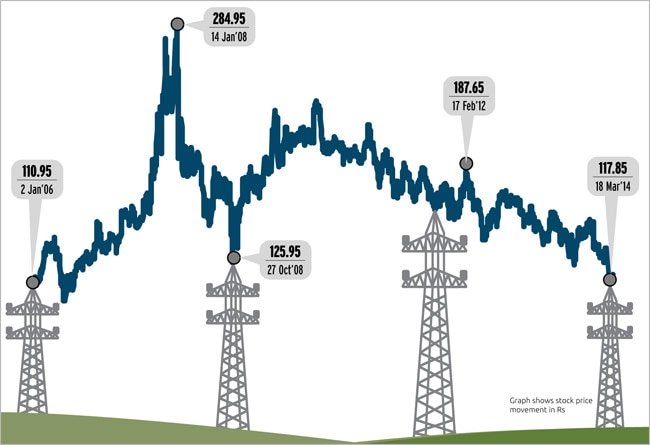 Market experts are bullish on NTPC. Vivek Gupta, director research, CapitalVia Global Research is looking positive on NTPC shares and says, "We have seen a huge downside movement in the stock due to CERC order that seems to be negative from 2014-15 onwards but we cannot take linear negative view on the stock and further downside movement on the stock is unlikely. Currently stock is underpriced. Investors can bet on it for longer horizon." 'Oil and gas companies' stocks will pay in the long run'