GlaxoSmithkline Consumer Healthcare investors are happy these days. Their stock touched an all-time high of Rs 4,391 on the National Stock Exchange, or NSE, on November 27 after GlaxoSmith-Kline, the parent, said a day before that it would increase stake in the company. Between November 23 and November 29, the stock rose 21 per cent from Rs 3,049 to Rs 3,695.

Similarly, Vakrangee Software promoters said on September 26 that they would buy an additional 4.57 per cent stake in the company. The stock rose 15 per cent to Rs 63 till October 1.

Usually, an increase in promoters' stake shows their confidence in the company. "Investors can buy stocks of companies in which promoters show interest, as it means they are sure about the business," says Binu Joseph, senior equity analyst, JRG Securities.

Stocks of 50 out of 65 NSE-listed companies in which promoters have increased stake in the last four quarters have risen after the purchase.

Are things this simple? Not really, say experts. One reason for the increase in holding could be that the promoters are taking advantage of a price fall. A case in point is Reliance Industries' share buyback a few quarters ago. This, too, however, shows that the promoters are confident about the company's future. "Weak market and poor fundamentals of the company can make a stock fall even if promoters are buying its shares," says Alok Agarwal, head of research, Bajaj Capital.

A reduction in promoters' stake, on the other hand, is a signal that they have lost confidence in the company. It makes investors think that the promoters, who know more about the company than others, are bailing out. This puts the stock under selling pressure, but not always. Take the recent rally in the United Spirits stock as investors cheered the sale of majority stake to global spirits giant Diageo. Promoters of 37 NSE-listed companies have sold their stock since the quarter ended December 2011. Out of these, 24 had given positive returns till November 26.

That is why investors must not go purely by the stake change but take this as a cue to look closely at the company. The fall in stake may be due to margin selling of pledged shares by financiers or conversion of global depository receipts or other instruments into shares.

"The stock falls if financiers sell equity due to non-payment of margins as it shows the weak financial health of promoters. However, if they are diluting stake to 75 per cent to meet the statutory requirement, the stock can rise due to hope of increased liquidity," says Ambareesh Baliga, an independent market analyst. All listed companies need to have 25 per cent public shareholding by June next year. 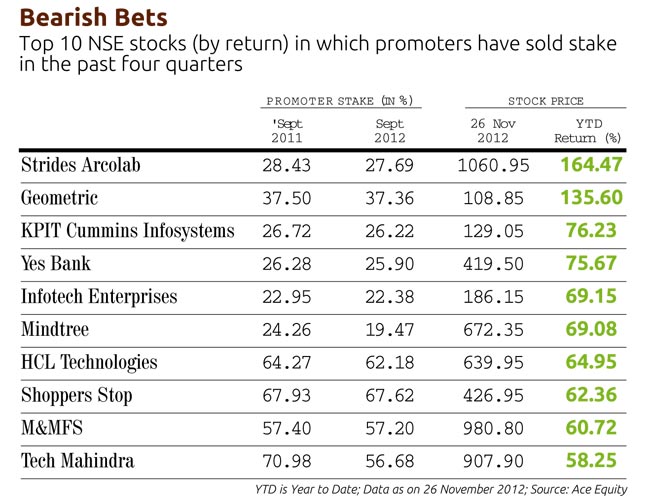 According to experts, any change in promoter holding is important from the investor's point of view. However, it should not be the only basis for investment decisions. Factors such as fundamentals and valuations are as important as the reasons for the stake sale.

"Promoters' actions are important but they should not be the only factors driving investment decisions," says Rakesh Mehta, assistant research manager, Fullerton Securities & Wealth Advisers.

Dipen Shah, head of private client group research, Kotak Securities, says, "An increase in stake by promoters is seen as positive for the stock, especially, if it is through market purchase or preferential allotment or conversion into equity shares at a price higher than the market price. In any merger and acquisition activity, if the promoters' stake rises on the basis of valuations that are not reasonable, one should be cautious."

Here are some attractive stocks which promoters have been buying of late.

Promoters increased their stake from 27.91 per cent in quarter ended September 2011 to 43.55 per cent in September 2012. The company recently opened its first overseas office in the UAE to tap the nonresident Indians living there.

Mumbai, Delhi and Chennai account for the company's 90 per cent portfolio. Its land bank is 836 acres, spread across Mumbai Metropolitan Region (MMR), National Capital Region (NCR) and Chennai. Out of this, nearly 46 per cent is in NCR, 33 per cent in MMR and 21 per cent in Chennai.

The real estate private equity arm of the global investment firm, Xander Group, is close to buying 35 per cent in a unit of the company for Rs 1,000 crore. Indiabulls recently launched a high-rise residential project called Blu over 10.76 acres in central Mumbai, one of the largest plots to be developed in the area.

The stock was at Rs 63.35 on November 26. Binu Joseph of JRG Securities says, "The stock can touch Rs 80 in the next few quarters."

The stock has risen 54 per cent to Rs 463 since January 2. According to an SMC Global Securities report in November, Gitanjali Gems' margins are expected to continue expanding on account of downstream shift along the supply chain from diamonds to jewellery. This is a move from the lowmargin end of the business to the lucrative jewellery segment and can help the stock touch Rs 507 in the next few months, according to SMC. 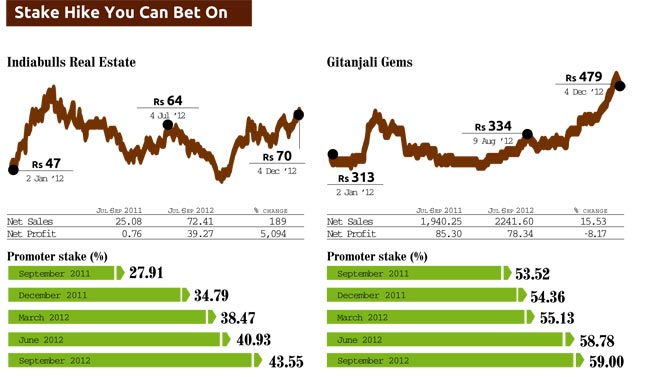 The company is working on improving profitability in the medium term. "It is driving change with more focus on integrated services as compared to only products, especially in the infrastructure management business. However, the macro scene is uncertain. We have set a target of Rs 305 for the stock," says Shah of Kotak Securities. On November 26, it was trading at Rs 250, with a priceto-earnings ratio of 9.75.

Mehta of Fullerton Securities & Wealth Advisers says, "The individual loan segment, which comprises 95 per cent of the company's loan book, grew 29 per cent a year between 2006-07 and 2011-12. Easing economic conditions and expected fall in interest rates in the next few quarters will help the company improve margins. The stock can touch Rs 296 in the next few quarters." 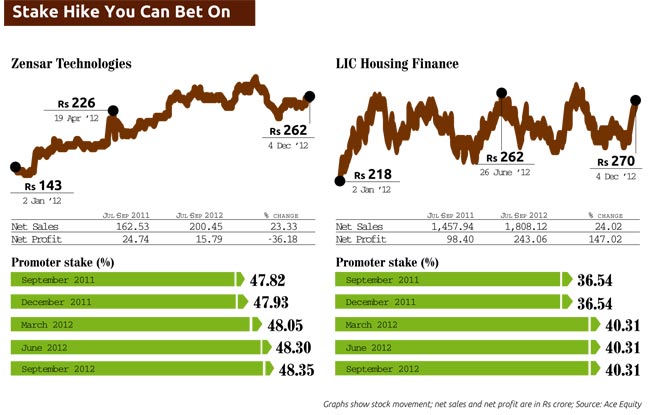 Best performing stocks in past 6 months

How to find bargain stocks in the current mkt