After almost a three-month hiatus, Dipen Sheth decides to venture into the stock markets and buys 10 stocks for reconstructing the Safe Wealth portfolio. 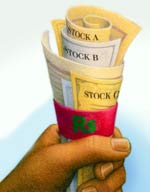 Friday the 13th sounds like an ominous day to start investing again for the model portfolios, but I bravely decided to take the plunge into investing after months of dillydallying. A lot has happened since we cleaned out both the model portfolios sometime towards end-2008. News flow and event triggers from the stock market have been uniformly negative—we had clearly deteriorating quarterly numbers for December, an indifferent response to the governmentsponsored stimulus packages around the world (including India) and more global pain in the diseased financial sector.

With the United States in the throes of a severe cut-back in consumption, it is doubtful that a worldwide economic recovery will happen soon. That should, however, not deter the careful stock-picker in India from finding proxies with a local investment theme and business drivers. Since capital preservation, rather than money multiplication, is the basis, I have bought 10 oft-discussed and recommended stocks to construct an initial version of the Safe Wealth portfolio this fortnight. We are at roughly 85% cash after this tentative nibbling. While we’ll buy a few more stocks to take up the tally to 12, or at the most 15, in Safe Wealth, I cannot imagine that we will exceed 30% or 40% in stocks anytime before the end of 2009 given the discouraging macro-environment.

For Wealth Zoom, the list of stocks will naturally be longer. Going up to 40%, or even 50%, in stocks looks possible. As suggested by readers, I might consider a significant position in fixed-income instruments such as bank deposits or treasury bonds or even in gold, which is likely to become dearer as central banks around the world indulge in irresponsible monetary expansion.

Wealth Zoom formally kicks off next fortnight. I will work harder on this one as we start with a severely wounded portfolio that has an NAV of Rs 7.43. On the other hand, Safe Wealth has a relatively more respectable NAV of Rs 9.67 as it debuts in its second avatar.

The objective of Safe Wealth remains unchanged. We will provide a capital preservation-oriented portfolio of stocks for the riskaverse investor. You can expect to see minimum churning, although time-averaged entry and exit can safely be expected for most picks.

So, unless there is a fundamental reason, do not expect me to book profits, or losses, within the first six months of buying any stock. Large falls (and it seems there will be quite a few of them, courtesy elections, Pakistan and global credit contraction) will be used to increase our position in these highconviction items.

More ideas will emerge as bad news flows bring down some great businesses to attractive valuations that arouse our greed.

Glaxo consumer: The leader in malted beverages is available at half the PE multiple of Hindustan Unilever and runs minimal risk of downtrading by its consumers. Show me another category-leading FMCG major quoting at 12 times and I will gladly substitute it for Glaxo Consumer. 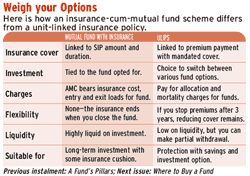 Click here to Enlarge
State Bank Of India: After a recent fall driven by a broadbased banking sell-off, India’s largest bank is available for less than book value, conservatively adjusting for a value of subsidiaries. The chief risk: reversal of asset quality cycle and slowdown in loan growth as the economy grinds into a recession.

Tata Power: It has the most visible capacity expansion plan over the next six years with a potential upside from coal mine ownership in Indonesia. The ongoing litigation with Reliance Infra and execution risk are two business challenges that this company needs to overcome.

Larsen & Toubro: Along with SBI, Bharti Airtel and Bhel, this one is a strong proxy for the India story that is unaffected by the advent of global recession. My worry about L&T is whether it will throw good money after bad into Satyam or whether it will walk away and bravely take a one-time hit.

BHEL: Don’t get fooled by Bhel’s indifferent 2008-9 performance. 2009-11 will see volumes zooming due to increased capacity and sustained order inflow.  Bhel is perhaps the only company in the portfolio with a four-year revenue visibility.

Maruti Udyog: Along with Hero Honda, Maruti is the only auto major whose volume growth seems assured. It’s not surprising because like Hero Honda it has demonstrable product superiority, specially in terms of fuel efficiency and maintenance budget—two aspects that matter more than anything to Indian consumers. Given its strong cash position and cheaper relative valuation, Maruti takes precedence over Hero Honda for Safe Wealth.

Bharti Airtel: There is no fresh argument to support the case for buying Bhairt Airtel. Suffice it to say that the assured growth in the sector coupled with Bharti’s extraordinarily gifted management makes it an automatic heavyweight choice for our portfolio.

Sun Pharma: This continues to be a highly profitable multi-pronged (generics, patent challenger, domestic formulation leader and lucrative therapeutic area specialist) pharma player with no visible signs of profit or top-line stress that are afflicting most of its peers (Ranbaxy, Dr. Reddy’s, Divis Labs and Glenmark).

Tata Steel: The big worry for Tata steel is whether Ijmuden (where Corus mostly works out of) will drag down Jamshedpur into losses. Right now, this is a distinct possibility as Tata Steel struggles with wafer-thin conversion margins in all its operations other than the ones in India. Still, the massive cost-cutting measures initiated recently are likely to see the company squeeze through 2009 with a net reduction in debt, contrary to what the naysayers will have us believe. If this really happens, most analysts would value the company at a fractional discount to replacement value, which would be at least twice the current market price.

GE Shipping: Along with Tata Steel, GE Shipping is a contra bet. Currently trading for over a 60% discount to its alleged NAV, GE is in the throes of renegotiating, rescheduling and partly cancelling its euphoria-charged order book. I suspect the short-term cash damages that it will bear will prove to be a very small penalty compared with the damage that an over-stretched vessel profile would have achieved. Consequently, GE should figure as a bar, especially if it is aided by even a small-time recovery in global freight rates.

Ask a question, post comments and share your investment ideas with Dipen or with fellow investors at MT Blogs on www.moneytoday.in and e-mail your comments on the two portfolios to mtportfolio@intoday.com

Disclaimer: Model portfolios are based on the independent opinion of Dipen Sheth, V-P, Institutional Equities, BRICS Securities Ltd. They do not reflect the opinion of the firm. They are for personal reference and information of readers. The firm is not soliciting any action based on the portfolios.

The way to long-term wealth

Are the brothers grim at Reliance?