Waiting patiently for another crash

Another fortnight and still no change in either portfolio. Dipen Sheth continues to sit on 50% cash even as he expects the markets to crack. Again. 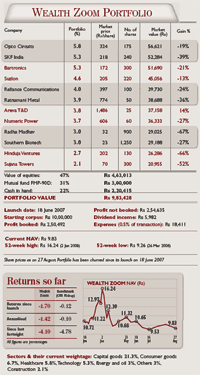 Click here to Enlarge
With more than half the wealth in both our model portfolios allocated to cash and equivalents (remember, we bought some FMPs a few issues ago?), we’re letting yet another fortnight pass by without any action. The temptation to buy new ideas (or simply average out some solid ones from the existing stuff) is as strong as it can get.

Look at the top holdings in our two models. Who would want to miss out on the chance to buy Opto Circuits at a 19% discount (for Wealth Zoom) or miss out on L&T at a 32% discount to original purchase price (in Safe Wealth)? Your fund manager, that’s who! Notwithstanding the increasingly acerbic comments about my ways on our blog, I am giving one more “buying opportunity” a miss solely on my conviction that the worst is yet to pan out on Dalal Street.

For our “long only” portfolios that are more than 50% in cash, this might be a strategy worth extending. We have waited patiently for some fortnights now, and a little more patience might just pay off. In case it doesn’t, we still have about 50% invested in high-to-moderate conviction stocks. This apparent ambivalence is my version of a “hedge” in these troubled times. Remember that a hedge need not maximise profits, merely minimise risk.

Both portfolios, meanwhile, have drifted down a bit from the previous observed levels. While Safe Wealth has dropped by 2.2% to its current NAV of Rs 10.89, Wealth Zoom has fallen 4% to a NAV of 9.83. Keep in mind that these falls in NAV have occurred with roughly 50% of our money in stocks, so actually the stock positions have fallen by twice as much. And yet, we are not buying. Why? If you are fishing for bad news on the business or economy front, you’ll find it pretty easily these days. Almost any company, any country and any industry is going through difficult times.

But that’s not the entire reason for our sudden caution. One important reason is the interplay (and consequent spiralling) of underperformance that will happen when a sufficiently large fraction of the real economy works downwards. Another reason is the relative ease with which the business (and social) environment is deteriorating via fresh developments, almost in sync with the reversal in the dream run we have had in the past four or five years.

Consider the rapid escalation of terrorism across the country, the re-emergence of Kashmir as a hotspot of separatism and militancy. Consider the prolonging of the dispute over KG gas between the Ambani brothers and Mamata Banerjee’s intransigence that threatens a signature investment in an otherwise resurgent West Bengal. Consider the Maoist and VHP-led upheaval in mineral-rich states like Chhattisgarh and Orissa, and the continued lack of initiative displayed by our political representatives in the face of these challenges. Click here to Enlarge
Now zoom out a little and take a global view. There’s Russia playing the blinking game with its smaller neighbour, Pakistan (yet again) fomenting trouble in India and staring at internal political breakdown, China settling into its post-Olympic hangover, and commodities coming down from their crazy bull market highs. Consider the fact that the largest economy of the world is in serious financial trouble (that has still not “played out” fully), and is approaching the last leg of its presidential election process. Global inflation and recessionary fears persist, and the world’s second most prosperous hotspot, Europe, is next to clueless about where it is driving.

Now consider the difficult questions that the otherwise willing investors ask nowadays when they invest in the Indian stock market? Do I have even a moderately “safe” currency that won’t give me a “negative carry” over the next year or so? Is inflation under control or likely to be soon? What about government finances? And all that big money that was going to be funnelled into infrastructure? Is it all going to come on time, and will India shine ever after? Will India’s famed talent pool finally deliver what it has promised for decades (or is it centuries)? And will the environment (or at least the weather and the terrorists) hold on while all these big changes play out in India’s heat and dust?

Tough questions, with no convincing answers. So where will the money inflows come from if Indian stocks are to move up dramatically from these levels? I’m afraid I don’t know. And that’s why we are not buying. Even at these levels. See you next fortnight.

One of the basic premises of investing is to acquire when there is value available in the market without being an astrologer. When the Sensex was at 12,900, this value was very visible and the fund gained from some purchases at that time. It is difficult to understand why the fund manager waited for the market to go down further. Now, again, “patient” wait is being adopted as a strategy. But wait for what? This is nothing but trying to time the market. I hope the portfolio does not start looking like a debt fund.
— Ratnakar Gokhale

I think we are missing on a very significant thesis of investing. It is called SIP, or to name it differently, price averaging. Why are we not trying to lower the cost of ownership for frontline stocks like Bhel, L&T and NTPC, to name a few? These are frontline stocks and should be accumulated in small amounts at a lower level to average out the cost and, if required, sell a portion on spikes.
—Anuj Rastogi