Win some lose some

MONEY TODAY portfolios have seen some rejigs. However, more than short-term volatility, it has to do with our long-term objectives.

The investment seas are getting rougher. With bull and bear waves lashing both our model portfolios, it’s been anything but smooth sailing over the last fortnight.

Volatility gives TV channels, newspapers and magazines the opportunity to allow broking houses, investment managers and big pundits the scope to indulge in all sorts of grandstanding. From subprime concerns to political instability, there are dozens of “expert views” out there. We choose to be silent, and mostly remain invested.

You will notice that we’ve made a few changes to the portfolios, with a long-term view rather than react to the market’s upheavals. Predictably, Wealth Zoom has taken the brunt of the reversals, with total appreciation (including declared dividends that we have added) falling to under 2%.

On the other hand, Safe Wealth has delivered on the promise contained in its brand name. It’s rock steady, up over 6% since inception some two months ago.

Sell IDBI: Let’s cash out of the increasingly volatile IDBI Bank scrip. We have made decent returns of 20% and there’s little to no encouraging news flow on this counter. 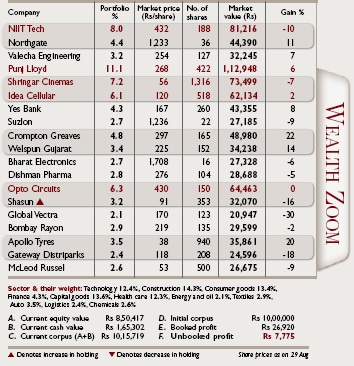 Sell SAIL: We’ve earned over 20% on this in two months. Markets are volatile and metal stocks are especially vulnerable to this contagion.

Sell Petronet: This is actually a long-term pick, and recent events suggest that there is short-term concern on its pricing freedom. At 11%, the return may not look sufficient to merit a sell, but we’ll cash out nevertheless. (We hold this stock with a long-term view in the Safe Wealth portfolio).

a. We’ve lost 10% so far on NIIT Tech, our heavy pick in the tech space, which is in line with the rest of the sector but that hardly offers comfort.

b. Shringar Cinemas, which we added last fortnight, is still to attract the kind of attention it deserves from stock pickers. Grin and bear it folks.

c. Suzlon and Bharat Electronics are down from our purchase prices but both are world-class companies and we expect them to spring back.

e. Global Vectra and Gateway Distriparks are the two real “duds” in the portfolio. Both are in capitalintensive sectors and have delivered EBIDTA margins far below their promise in the June 2007 quarter. We don’t have a clear insight on why this has happened. For now, we’ll hold tight.

Average out Shasun: This pharma company with several margin triggers in its overseas operations has had a bad quarter. Rupee appreciation woes have added to the stock’s misery. We’ve reposed additional faith and bought another 200 shares in the hope that things will improve.

This portfolio has actually weathered the volatility of the past few weeks rather neatly. Fourteen out of 17 stocks have delivered positive returns while the three that are in the red are such good stories (Infosys, Sun Pharma and Petronet) that they offer no immediate cause for worry. Let’s raise a toast to solid, long-term stock picking. Reduce GMR: We’ve sold half our holding in GMR Infrastructure simply because we earned over 47% on it in such a short time.

No other action: Safe Wealth is not a portfolio that will be known for its strong churn. We are well over 12% in cash and would like to wait another fortnight before we increase positions in any existing pick or add a new bet.

Dividends: It’s dividend season, and (surprisingly) we’ve earned better dividends on the Wealth Zoom portfolio (Rs 2,396) than on Safe Wealth (Rs 1,431). Also, this fortnight we incorporated some changes to Wealth Zoom arising out of Apollo Tyres’ stock split (10 for 1; the share is now Re 1 FV) and Gateway Distriparks’ small bonus issue (one for four).

Confession time: The model portfolios have handed out some big lessons in investing for yours truly. It’s at once challenging and wonderful that I can take investment decisions only on alternate Wednesday evenings and spend the rest of the fortnight agonising over how easily I could have chosen to delay or advance my decision by a few days and “do better”.

This has taught me to buy or sell only with solid conviction and prudence rather than try to read short-term momentum.

Construction stocks on the rise