Be bullish on saving tax

Equity-linked savings schemes are one of the best tax-saving instruments as these have delivered the highest returns compared with other options.

It's always good to get the best of both worlds. In the investing arena, a financial instrument that offers dual benefits is the equity-linked savings scheme (ELSS), also called tax-saving mutual fund. Investments in an ELSS qualify for tax benefits under Section 80 C and also earn substantial returns as you gain from the exposure to equities.

Both investors as well as financial planners swear by ELSS and it has emerged as the favourite tax-saving option among them. Tax-saving mutual funds are typical diversified equity mutual funds except that they come with a threeyear lock-in period. An investment made in an ELSS is eligible for tax deduction under Section 80C of the Income Tax Act.

"Equity-linked saving schemes are the best taxsaving instruments as you can redeem these funds only after the lock-in period of three years. As the returns are long-term capital gains (held for more than a year), they are tax-free. The average return from such funds in the past five years has been close to 20 per cent," says Kartik Jhaveri, founder of financial planning firm Transcend Consulting. Here are the reasons why ELSS score over other tax-saving options.

Gaining Most from Equities
Among the approved savings instruments under Section 80C, ELSS, unit-linked insurance plans (Ulips) and the National Pension System (NPS) are the only ones that have an equity edge. 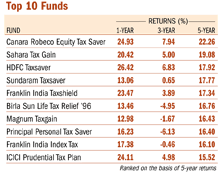 Click here to Enlarge
Ulips, that are similar to mutual funds in features, can also have up to 100 per cent equity exposure. However, as a portion of the premium amount is used as mortality charges (charges for providing death cover), the actual amount that gets invested comes down substantially. The NPS, on the other hand, has a 50 per cent cap on equity exposure, thus making the long-term returns less attractive than pure-equity instruments such as ELSS.

High ReturnsAs ELSS are equity diversified funds, the returns from these schemes are in line with those of equity indices, such as the Sensex and the Nifty. Also, the three-year lock-in gives flexibility (as there is no redemption pressure for three years) to fund managers in picking the right stocks and holding them in the portfolio to get a desirable return.

The five-year average annualised returns of ELSS are close to the gains witnessed by the Nifty and the Sensex. In the past five years, the average annual return given by tax-saving funds has been 14.5 per cent compared with 16.5 per cent of the Nifty and the Sensex, as on 31 December 2010. Of the 23 schemes that have completed five years or more, 21 have given more than 10 per cent annualised returns, while the balance 12 have given more than 15 per cent.

These returns are much higher than those delivered by other tax-saving instruments such as bank fixed deposits, which offer you, at most, 8-8.5 per cent. The PPF and Employees Provident Fund (EPF) also give similar returns, while the Senior Citizens' Savings Scheme gives an annual return of 9 per cent. Also, not only are the long-term capital gains from ELSS tax-free, even the dividends are exempt from tax.

SIP's the WayA systematic investment plan (SIP), through which investors can invest small amounts at regular intervals, is one of the best ways of investing in ELSS. Investments through SIPs allow investors to take advantage of the fluctuations in the stock markets by cost averaging. In a rising equity market an investor gets fewer mutual fund units but when the market is sliding he/she gets more units. This also helps investors reap the benefits of compounding.

"Monthly SIPs are the best way of investing in funds as people can synchronise their investments with their salary," says Sanjay Sinha, chief executive officer, L&T Mutual Fund.

Despite the benefits of regular investment, majority of the investors rush to invest in tax-saving instruments only during the fag end of the financial year. Investing in a lump sum means that you can lose out on substantial returns as was calculated by Value Research (see The SIP Advantage).

If an investor had invested a lump sum of any amount on 1 January 2008, the maximum returns he would have made on 31 December 2010 would have been less than 8 per cent. However, if he had invested systematically over the same period, he could have gained a maximum of 35 per cent. So, if you want to reap the benefits of ELSS, start investing through SIPs from the start of the financial year rather than fill the investment gap during the last quarter.