The excitement of a live sporting spectacle is as unique an experience as possible, absorbing the palpable excitement of a restless crowd, the collective experiences of success and failure and, most important of all, witnessing an exhibition of human motion being pushed to its outer limits. There are millions who find poetry right there at those moment.

And yet, experiencing such wonder is rooted in prudent financial planning and requires painstaking preparation. It is always advisable to begin planning well in advance.

Book the tickets before anything else as, usually, the enormity of the event is directly proportional to the rate at which the tickets disappear. Second in the list would be reservation of suitable accommodation near the venue.

"Tickets for popular sporting events, such as FIFA and ICC World Cup, are sold out as soon as the sale begins, which is sometimes as early as a year in advance. For instance, FIFA 2014 and its venue Brazil is an attractive combination for many travellers. Match tickets and accommodations have already started filling up and the chances are very high that tickets for the most important matches will be sold within this year," informs S D Nandakumar, head, tour operating B2B, Kuoni India.

If it's an eleventh-hour booking, it is better to book through a travel operator where you can make all the reservations from the same source. Typically, these packages include accommodation, airport transfers, local sightseeing and event tickets.

"The biggest advantage of packages is that the fans do not need to spend their time planning. Once they decide which sporting event they would like to attend and for how many days, everything else is taken care of by the travel operator," says Rajeev D. Kale, chief operating officer-leisure travel, Thomas Cook (India) Limited.

Of course, it's always better to make your decision as early as possible. You are likely to get early bird advantages even for air tickets. Plan the trip just like you would any other holiday. Do not forget to collect information about the city, including road maps and local attractions.

Also, find out the cheapest possible options. Remember that you will be part of a huge contingent of visitors, all there for the same event and looking for the best bargains for that period.

Great planning will ensure that you have the best time possible.

CRICKET
For the cricket crazy, the ICC World Twenty20 2012 in Sri Lanka this September is an opportunity not to be missed. This is the fourth edition of the competition and the first T20 World Cup to be held in an Asian country, the last three being held in South Africa, England and the West Indies.

Though ICC has official travel agents for different regions of the world, the various packages being offered by them are slightly expensive. The tour will cost much less if you do a little planning. So, book your own tickets (link available on the official website-www.t20worldcup2012.com) and make your own reservations.

While you are there
Colombo, the largest city in Sri Lanka, is famous for its huge harbour, well-known among traders. Places to see are the historic fort, Pettah Bazaar, Colombo Museum, the Galle Face Green, New Parliament and the Dutch Museum. 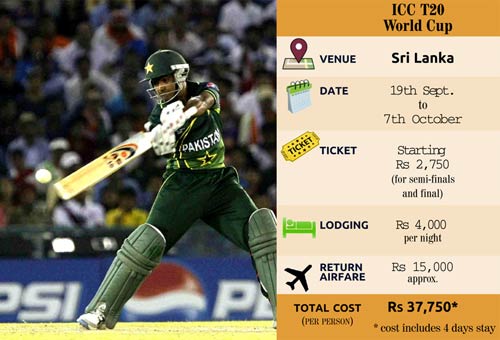 MOTORING
The 2011 Indian Grand Prix was the country's first and was successful in adding to the fan base for the sport. Those who missed the opportunity last year or for those wanting for an international circuit experience, the Chinese Grand Prix in Shanghai and the SingTel Singapore Grand Prix, the only night race in the Grand Prix calender, are excellent experiences.

The official website (www.formula1.com) has a travel and ticketing link where one can book a customised trip (including flights, accommodation, airport transfers and event tickets). A basic flight plus accommodation combo for Singapore (ex-Delhi) starts at Rs 26,330, whereas it is Rs 32,730 for Shanghai.

One can add a tour of Shanghai (Rs 2,212 per person) or a Singapore Universal Studios pass (Rs 2,734 each) to add to the excitement, not that a Grand Prix experience is not worth the trip by itself.

Travel firms are also selling package trips to these destinations. A 3-night and 4-day package from Thomas Cook (India) for the Singapore race starts from Rs 30,999 per person. You can also create your own tailor-made trips using the various travel portals, such as Yatra.com and Makemytrip.com. If you are early enough, these might work out to be the cheapest.

While you are there
Take a half-day tour and drive around singapore. The hot-spots are the Civic District park, Padang Cricket Club, Parliament House, Supreme Court, City Hall and Merlion Park to get a view of the Marina Bay. The Sentosa Island is famous for its Underwater World, home to 250 marine species and the 4D Magix Show. For movie buffs, Universal Studios should be the destination.

A tour of shanghai should include a visit to the Jade Buddha Temple, Zhujiajiao (an ancient water town) and the Yuyuan Garden. For picking up local handicraft, Nanjing Road will be ideal. 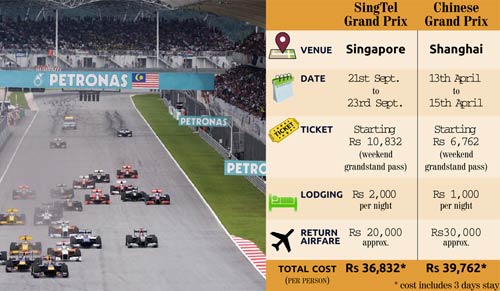 FOOTBALL
Poland and Ukraine will host the best of European footballers between June 8 and July 1. However, tickets for UEFA Euro 2012, available for all 31 matches vanished long ago, to be precise, last April. So, one can only buy them from the re-sale platform from lucky applicants who got the tickets but won't be able to make it or got a ticket for a match they aren't interested in.

These tickets are being resold through the UEFA ticket resale platform (https://ticketing.uefa.com), which has been in operation since July 2011 and will close on 10 April. However, this is not a sure-shot way to get a seat you want.

Also, you'll definitely not get tickets for the finals and semi-finals. If you don't want to take a chance, go for packages by travel agencies. Offers from SOTC sports start at Euro 1,450, approximately Rs 96,000 per ticket. To watch two quarter finals, one semi-final and the final in Ukraine, you'll have to pay Euro 10,900 per ticket (Rs 7,20,000). But they are selling the seats only in sets of four and even numbers above that. So, you have to buy a minimum of four tickets.

Ukraine is slightly cheaper than Poland when considering airfare and accommodation. A return flight to Kiev will cost about Rs 30,000 while a round-trip to Warsaw will cost about Rs 35,000. Similarly, shared hostel accommodation in Ukraine costs about Rs 2,000 per night, while it'll be between Rs 2,500-Rs 3,000 in Poland. The final will be played in the Olympic Stadium in Kiev.

While you are there
kiev is a fascinating destination for people interested in history and ancient architecture. The city has quite a few monasteries and churches that are centuries old-St. Michael's Cathedral with golden domes, Cathedral of St. Sopia (built in early 11th century), St. Andrews Church, the Kiev Pechersk Lavra monastery, Vydubychi Monastery and St. Volodymr's Cathedral.

Other attractions include the Golden Gates, Kyiv River Station, Park of Eternal Glory, the House with Chimeras and the Mariyinskiy Palace. Take a stroll in Andriivskyi uzviz, also called the Monmartre of Kyiv, to experience local craft and art and buy antique souvenirs. 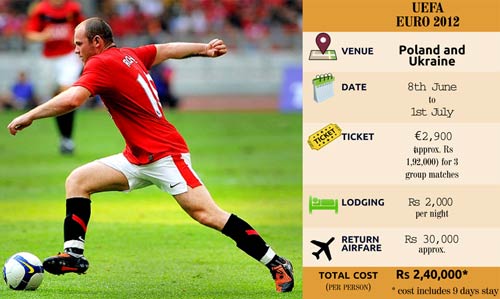 TENNIS
The excitement and extravagance of two of the most prestigious Grand Slam Championships is truly magical for tennis fans.

The ticketing for Roland Garros, the Grand Slam on clay, opened on 15th February. The official website (http://rolandgarros.fft-tickets.com) has a simple online booking process. However, getting a ticket will be difficult as it is already almost sold out.

In fact, no seats are available for Philippe-Chatrier court and Suzanne-Lenglen court, where the finals and semi-finals will be played. You will have to book through a travel company to ensure a seat. While packages from SOTC sports start from Euro 1,100 (Rs 72,000 approx), Thomas Cook packages start from Rs 49,999.

For Wimbledon, tickets were available through public ballot, which closed on 31 December 2011. So, you have to go for packages offered by Keith Prowse, the event's official hospitality and overseas tours partner.

There are tours starting at 220 pounds (approx Rs 17,000). This includes one night's accommodation at a 3-star hotel along with a reservation for Court No 2 on 3 July, London Underground travel and gifts. The rates will differ according to the dates, court preference and accommodation. The packages for the final start from 4,795 pounds (Rs 3,79,000 approx). Some tickets will also be available online via the Ticketmaster website (http://www.ticketmaster.co.uk) for the Centre Court and Court No 3 on the day before play.

While you are there
If you are a Disney fan, when in paris, a trip to Disneyland would be the best option. You can take a city tour and visit the Arc De Triomphe, Champs Elysees, Grand Palais, National Assembly, Concorde Square, Opera Garnier, Cite Island, Orsay Museum, Church of the Invalides, Notre Dame Cathedral and the Eiffel Tower. You can also enjoy a cruise on River Seine. The city looks beautiful at night, when these monuments are illuminated. 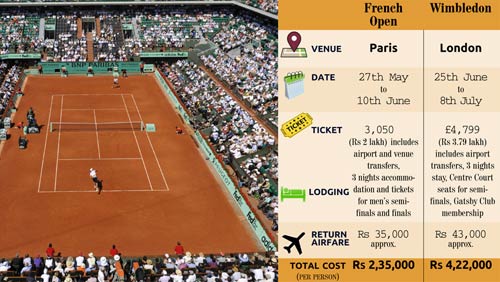 Tips to plan that budget holiday