The inflation that makes its way to the headlines of newspapers and political campaigns is the Wholesale Price Index (WPI). But this is not the index that affects you. 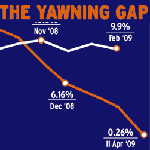 It's déjà vu: a year-and-a half ago, we said it here. Now we need to say it again: inflation, touted as being well under control at 0.26%, is too high for comfort. This is because the inflation that makes its way to the headlines of newspapers and political campaigns is the Wholesale Price Index (WPI). But this is not the index that affects you. What impacts the ordinary consumers is the Consumer Price Index for urban, non-manual employees (CPI-UNME). In February 2009, this index was at 9.9%.

If you were lulled into a false sense of comfort, don't be too hard on yourself. Experts have filled reams of print debating whether inflation would touch 0% or head for negative figures. None of it was wrong; only, they weren't talking about the index that impacts your monthly budget. As we had said before (read ‘The Invisible Hole' on www.moneytoday.in), the CPI-UNME is more relevant to urban Indians because it tracks their consumption baskets more closely and reflects retail prices.

The point is, if the weightages in the two indices are so different, why isn't an almost 10-point gap between the WPI and CPI seen more often? Is there anything special this time? "The culprit is the price rise in food, which is given a much lower weightage in the WPI than in the CPI," says D.K. Joshi, principal economist, Crisil. Inconsistent with other items on the list, inflation in food prices is raging at about 11%. Its weightage in the WPI is only 15.4%; in the CPI, it accounts for almost half the index: 47.13% (including tobacco and beverages). The effect of soaring prices in food is reflected far less in the WPI than in the CPI. This has single-handedly widened the gap between the two indices. 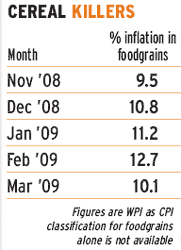 Retail food prices in India have been rising despite a global downward trend. Joshi says that the main cause is the steady and high jump in minimum support price (MSP). In 2008-9, the government increased the MSP of paddy (the common variety) by 31.8% and that of lentils like urad and moong by 48.2%. This year, the MSP of rabi crops such as wheat rose by Rs 80 per quintal and gram by Rs 130 per quintal. The shortfall in production of some crops such as pulses and rice has also contributed to the rise in their prices. Experts predict a bumper crop this year, which should scale down the prices, though Joshi says the effect of a higher MSP will not be completely neutralised.

The good news is that inflation in foodgrains is tapering off. The latest WPI figures reveal that inflation in this segment is about 10%. Joshi predicts that lower food prices should pull the CPI-UNME down to about 4% in the next three to four months, whereas the WPI is likely to enter the negative zone.

What's the effect of these changes on your budget? Not much, because food isn't a very large portion of the urban consumption basket. Still, lower prices should help. Lower inflation rates also mean that softer interest rates are here to stay and inflation-adjusted returns on debt investment could be more reasonable. Watch this space for an analysis of the new CPI Urban index slated for release in May.
- By Kamya Jaiswal 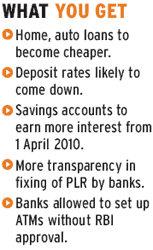 Apart from the cuts in the repo and reverse repo rates by RBI in its annual policy (which should further bring down interest rates on home and auto loans), there are other sweeteners for individuals. Starting 1 April 2010, the money in savings accounts will earn more than the 3.5% that the banks currently pay. This is not due to the rate hike, but because RBI will switch to calculating the interest on savings accounts on a daily balance basis. Currently, interest is calculated on the minimum balances held from the 10th of each month to the last day of the month. "In a country where there is no social security and a large number of retired people depend on interest income for livelihood, this will mean extra interest income, that too in a falling interest rate regime," says Roopa Kudva, MD and CEO, Crisil. Reacting to concerns that cuts in key policy rates were not being passed on to borrowers, RBI is also considering ways of making the benchmark prime lending rate more transparent. The deposit rates could fall, giving those who want to invest in such accounts a limited time window.
- By Rakesh Rai

Imagine getting a letter from the taxman asking for payments—despite having paid the taxes on time. This happened to some unlucky taxpayers this month. They received letters demanding more tax and, worse, interest on the amount. "This is not the case just with salaried employees, but also with companies, self-employed people and others," says chartered accountant Mehul Sheth, many of whose clients got such letters. The epistles say that if the amount is not paid within 30 days of "service of intimation", the taxpayer will have to shell out a simple interest of 1.5% for each month of default.

This isn't because of a mistake in filing the returns. It's the result of an information mismatch: the department hasn't taken into account the tax deducted at source (TDS). The discrepancy is for the assessment year 2007-8. Accountants and taxpayers will now have to provide a written clarification, with essential income proofs, such as Form 16 and 16 A and TDS certificates. Clearly, as far as the taxman is concerned, even when he's wrong, the taxpayer isn't right.
- By Rakesh Rai