India's sheen may have dulled a bit, but when it comes to employment, Indians are optimistic about job security in 2009.

Cricket may be the game of glorious uncertainties, but it pales in comparison with investing in the stock market, especially now. Participants, from small individual investors to mutual funds, corporates and institutions, both foreign and Indian, have been shying away from investing. Market activity has been on the decline, with both buyers and sellers keeping away. Equity mutual funds, that are there to invest in stock markets, are all holding high cash reserves because of poor market performance, coupled with the fear of a further tumble in the stock market fortunes.

Among the domestic institutions, insurance companies, especially the Life Insurance Corporation (LIC), play a significant role as an investor. They act as insurance for the stock markets, taking the form of large-scale, long-term, inflows of funds into the market, which helps protect it from shocks and volatility. In the past four years, private unit-linked insurance plans (Ulips) alone have invested over Rs 1,00,000 crore in Indian equities. LIC had a cumulative investment in equities of up to Rs 2,00,000 crore till December 2008, or 14.32% of the Sensex market cap, and 7.39% of the BSE 500 market cap (as on 27 January 2009).

Says T.S. Vijayan, chairman, LIC: "Our investment will cross Rs 35,000 crore by March 2009 (up from Rs 31,000 crore in December 2008), which is about 15% less than what we had invested last year." Considering that the number of quality companies to invest in is less, this move will make LIC increase its stake beyond the mandated 10% upper limit that the Insurance Regulatory Development Authority (Irda) set in August 2008. However, Vijayan says, "If they are changing the goalposts, we are asking Irda to teach us how to score goals the next time."

For a battered stock market, fresh money in the system, especially through a domestic institution that has a track record to stay invested for the long term, is good news. "Market activity will increase and so will the confidence among investors, giving a fillip to the stock markets," says Amitabh Chakraborty, president (equity), Religare Capital Markets Limited. Like LIC, private insurers will also commit funds to the markets. With the tax-planning season in full frenzy, money collected by these institutions will help add to the dwindling market capitalisation and increase market activity.

LIC cushioned the stock market fall by infusing funds when large-scale exits were triggered by FIIs in 2008. After all, it's not just the quantity; what really helps stabilise markets is the quality of insurance money, particularly if it stays invested for the long term and is not withdrawn overnight. With pension funds set to become active from April 1, such money will play a big role in the markets. There will, of course, be periodic fluctuations in price as FIIs, mutual funds and retail investors act on speculations, but the growing presence of long-term capital will act as a small, but certain, buffer or stabiliser to buttress against market movements that could become landslides.

India's sheen may have dulled a bit, but when it comes to employment, Indians are optimistic about job security in 2009. In a survey conducted by TNS and Gallup International, only one in four Indians thought there was a chance that they might lose their job, while 62% of employed Indians felt their present job was safe. This is low compared with Japan, where only 30% believe their present job is safe. The Voice of the People End of the Year Survey was conducted between October and December 2008 across 46 countries in the Asia Pacific region. The optimism is surprising given that 57% of Indians believe unemployment will rise in 2009, but this is way below what others feel (see graph). The main reason seems to be that most respondents felt that though quite a few Indians will be given the pink slip, they won't be the ones receiving it. "There is an overall confidence that 'My job is secure. Difficulties, if any, are for the others not me'. The recent events may cause some rethinking," says Chhavi Bhargava, executive director, TNS India. 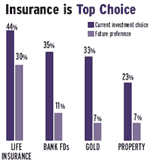 Despite the highly attractive fixed deposit rates offered till recently or the prices of gold and real estate, life insurance continues to be the preferred option for investment among Indians. According to the annual Nielsen Life 2008 survey, life insurance has the highest penetration level, followed by bank FDs, gold and property. Clearly, the current turmoil has made it tough for equity markets to compete. Life insurance also tops the list of future investments, with 30% respondents agreeing to consider it. "In the wake of the global financial meltdown, most investors are looking at options which help them safeguard capital. Life insurance is seen as one such avenue," says Kalyan Karmakar, associate director, consumer research, Nielsen. As per the survey, the key triggers for buying life insurance are family protection in case of untimely death, retirement corpus and securing a child's future. Interestingly, tax exemption as a trigger to purchase insurance has dropped significantly, compared with 2004. There's also a consumer divide between private and public players. Most respondents chose LIC for their first policy, but there is a strong tendency to look at private players for subsequent policies.  (The survey was conducted among 12,760 working men and women in the 22-50-year age group in December 2008.)

Valentine's Day is around the corner and if you are wracking your brains for a gift idea, DataWind has something for you. The leading provider of wireless Web access products and services recently unveiled the PocketSurfer2, claimed to be the fastest handheld Internet device in India. It has a page-load time of less than seven seconds for the heaviest Web pages. How does it manage to do so? The device optimises the size of the page, enabling faster downloads. Says Datawind CEO Suneet Singh Tuli: "You can now surf the Net any time, any place, and enjoy the same rich media graphics and browser functionality as on the desktop."

Priced at Rs 11,990, with taxes, the device has a full-colour elongated screen and a backlit QWERTY keyboard with keys six times larger than in other handheld devices. It offers free usage of 35 hours per month for a year and DataWind plans to introduce a prepaid card to facilitate payment. However, if you own a GPRS-enabled phone or a Blackberry and a laptop, you won't miss it as it doesn't boast audio and video capabilities.

For a layman seeking an insurance, a unit-linked insurance plan (Ulip) is probably not the easiest product to understand. It is with this in mind that the Tata AIG Life Insurance has introduced InvestAssure Insta, a Ulip that is simple to grasp for an ordinary person. All that one needs to do is choose the premium that one can pay annually (Rs 20,000-50,000), the term (between 10 and 15 years) and the funds to avail of the dual benefits of insurance coverage and wealth creation. "This plan is extremely transparent, easy to comprehend, offers a higher premium allocation and guaranteed maturity bonus of 5%," says Trevor Bull, managing director, Tata AIG Life Insurance. The policy offers the customer five fund options, depending upon his risk-taking appetite. These range from a low-risk bond fund to a Top-50 fund that invests predominantly in equities.

With a guaranteed maturity bonus, the policy also has a high allocation rate, allowing the policyholder to get the most out of his investment and its growth potential. One can sign up this policy with a simple health declaration without going through the rigmarole of tedious medical tests. Besides the standard five times annual premium cover that the policy offers, the policyholder also receives the total fund value at the end of the term if he survives. There is also a facility to park the excess funds in this policy through top-ups, within the limits prescribed, and the premium paid under this policy is eligible for tax benefits under Section 80C of the Income Tax Act.

The realty market has seen a shift from being investor-driven to one that has a higher enduser demand. More residents, as against migrants, are now buying property in cities.