Looking for one central theme for Bill Clinton’s presidential campaign in 1992, political strategist James Carville had come up with a line that became a memorable slogan: ‘It’s the economy, Stupid”. For a few days after the announcement of January figures of Index of Industrial Production (IIP) this slogan reflected the mood and movements on the stock markets.

Looking for one central theme for Bill Clinton’s presidential campaign in 1992, political strategist James Carville had come up with a line that became a memorable slogan: ‘It’s the economy, Stupid”. For a few days after the announcement of January figures of Index of Industrial Production (IIP) this slogan reflected the mood and movements on the stock markets.

Worried that the IIP figures presage a coming slowdown in the Indian economy, a sudden sale of stocks started, pushing the Sensex to August 2007 levels. So far, the backbone of the volatile market has been the belief that Indian economic growth is on track, no matter the small bumps in the form of global economic downswing and the still-unravelling subprime crisis. But if the prospects of the economy are in question, investors need to review their call on how much, where and for how long to invest in stocks, mutual funds—or in any equity-based instrument. 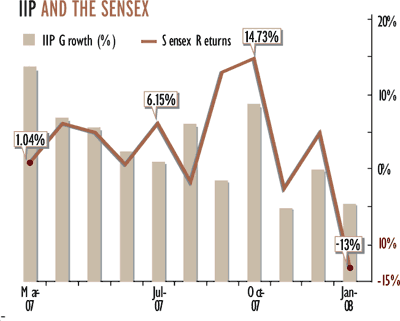 Answer to this question depends on the extent and spread of slowdown, if there is one. IIP is just one, though important, measure of economic activity. But the index has swung quite a bit in the past one year, implying that a dip does not point to a sustained fall—at least not as yet. Though the correlation between IIP and Sensex is positive, there is no study to prove whether it is causal or coincidental. IIP figures come once a month with a two-month lag, whereas stock indices factor the future in the current stock prices.

Most experts predict the next IIP figures to show an upswing. So there is no need to change your investment outlook based on the January 2008 figures. There are other indicators of economic well-being than IIP. Inflation, interest rate, exports, investment, productivity and the GDP all reflect the health of the economy and are also interrelated. GDP growth is certain to slowdown, but only marginally (from 9.7% in 2006-7 to 9% in 2007-8) and exports won’t rise at the rate targeted by the government for 2007-8.

Add the prospects of a US recession, continuing worry on inflation and a certain drop in earnings, and the fact that we are headed into a slowdown seems certain. It’s also certain that it will be a minor slowdown—more like a speed bump—and domestic consumption growth will prevent any severe downswing. The takeaway? Even the most risk averse investor among us needs to keep a keen eye on the economy.

We’ve said it often enough: Indians are among the best savers in the world. The need to save has generally been seen in the huge popularity of small savings schemes like the PPF, NSC and KVP. The assured returns and tax breaks added to the attraction of these schemes, which were also considered safer because they were all floated by the government.

However, the latest data from the National Small Savings Fund (NSSF) shows a change in this perception—the retail investor is now moving away from small savings, possibly attracted by the better yields offered by banks, mutual funds and stock markets. The net collections of small savings have been in negative territory from the beginning of this fiscal year, taking the NSSF collections down by 68% compared to 2006-7.

If it is any consolation at all, the Government can take comfort in the fact that net collections of the 15-year Public Provident Fund until December 2007 were positive at Rs 837.38 crore. But the net negative collections overall mean that the Government will have to provide the cash to meet repayments whenever it comes up. That’s definitely bad news.

The most successful and the most sold unitlinked plan from LIC, Market Plus, is going to be discontinued on 31 March. The pension plan was launched in July 2006, as the stock markets were picking up, as a replacement for ‘Future Plus’. The product had been launched following the then changed Ulip guidelines, including a minimum threeyear lock-in prescribed by the insurance regulator.

As on 11 March, the growth fund had an NAV of Rs 12.17 with a one year return a shade under 10%, way behind the market barometer Sensex’s 33% return in the same period. But that is not the reason for the popularity of the policy. Unlike many other pension plans that insist on a life cover, Market Plus pension could be purchased with or without life insurance cover.

This was a huge advantage to senior citizens in particular, since they would not have to shell out huge amounts as life insurance premium if they wanted to take advantage of the Ulip. Naturally, the policy was a hit in terms of collections and the number of policyholders opting for it. The reasons for the closure, therefore, are not performance driven.

In fact, it’s the sheer popularity that has overwhelmed the company, as it finds it difficult to deal with the unwieldy size of the scheme. The asset size runs into a few thousand crores across all the four fund variants—bond, secured, balanced and growth. With the closure date announced, there is likely to be a last-minute rush to invest in this scheme, given its unique benefits.

After the recent IPO debacles, the anxiety among subscribers of initial public offerings is understandable. The three-week period between the IPO closure and the listing date gives rise to all kinds of speculations and grey market trading in a company that is yet to list. A worrying feature is the fact that the grey market seems to be growing on speculation.

In a bid to discourage grey market trading, the market regulator, the Securities and Exchange Board of India (Sebi) plans to reduce the period between the IPO closing and listing. This will help in two ways: one, the IPO cost will go down, and two, the short span between closing and listing will reduce grey market speculation. “The IPO expenses are borne by investors as it is accounted for by companies, a shorter time span will reduce such excesses,” says CB Bhave, chairman, Sebi.

This will also reduce the time for which retail investor money is locked in for, reducing the cost of borrowing as well. The other beneficiaries are likely to be asset management companies (AMCs). That's because the AMC's expense on a new scheme is generally more than the fixed ceiling and the residual cost is borne by the AMC. This will now be done away with if Sebi's proposed move comes into effect. All told, the retail investor is bound to benefit from this move, if it sees the light of day.


A million jobs, and counting

It’s raining jobs. Or at least that is what the Ma Foi Employment Trends Survey (METS) predicts for 2008 with an overall 3% increase. The growth is however not uniform across the 22 sectors that the survey covered (see tables). “Some sectors are expected to log negative growth in employment, but overall there is a positive growth, especially in the health, hospitality, IT and ITeS sectors that will generate jobs,” says K Pandia Rajan, managing director, Ma Foi Management Consultants.

With overall employment demand continuing to surge, many global players are looking at business opportunities in the country thereby making 2008 a year when employment will again be robust and healthy. For first time job seekers (fresh college graduates) the survey predicts a million jobs in the taking.

The demand for freshers according the survey will come from the hospitality, energy generation and supply sector, ITeS, and mining and extraction. Though there are fears of a moderate economic slowdown this year, employment growth will remain positive. While the survey does not indicate salary levels for job seekers, the energy sector is expected to be the one offering the biggest pay packets.

Some figures that have immediate or long-term personal finance implications

86% of the world’s population resides in emerging markets. But this market accounts for only 9% of world equity market capitalisation.
Source: IMF, Citigroup,BP

10,000 is the number of branches owned by State Bank of India. This makes SBI the world’s second most branched bank after the Bank of China

9,210 crore rupees is the amount likely to be spent by online users in the country on buying and selling goods or services on the Internet in 2008. India has 38.5 million Internet users
Source: Internet and Mobile Associ ation of India and IMRB

2.8% is the depreciation in the value of the rupee vis-a-vis the dollar in 2008. In fact the rupee is fast aproaching a sixmonth low.This is bad news for all those planning a foreign holiday this summer

Do you know why you’ve invested and what you’re invested in? You can check your financial quotient here. More quizzes on our website

2If I own two houses, I can claim that both are self-occupied and don’t have to add the rental income to my total income
 YES /  NO

0-1: Better luck next time (and do take the time to read this magazine. There’s plenty of information that could prove useful)
2-3: You’ll do—your grasp of your finances seems pretty good, though, of course, it could be better!
4: Obviously a know-it-all. Just make sure to keep reading and keeping your knowledge up-to-date

Under the agreement, there will be a dedicated, manned Tata-AIG counter at post offices. Renewal payments can be made here in cash, and the back-end logistics have been integrated with the company to ensure smooth and secure payments and efficient record updating. This will help the company spread its network of counters, as well as aid policyholders’ access to outlets. Currently available at select post office branches, the service will be made available across 5,000 post offices over the course of the year.

Pension plans seem to be all the rage, if the flurry of new offerings is anything to go by. ING Vysya Life is the latest entrant, with its Golden Life, a unit-linked retirement solution. The policy allows you to choose the retirement age, offers flexible payment options and helps manage investments based on your risk preference.

Says Kshitij Jain, managing director and CEO, ING Vysya Life: “The life expectancy rate in the country is sharply increasing from 40 years in 1950 to 75 years at present. Pension plans offer a lot to retiring people who opt for managing their retirement fund according to their risk profile.” The unit-linked plan has both regular and single premium options with the scope for unlimited premium top-ups and loyalty units for regular premium payments.

The loyalty units get credited at the end of each policy year and in a way acts as a bonus and incentive to maintain the policy for a longer duration. At the end of the accumulation phase, the policy can be converted into an annuity. The company allows the policyholder to opt for an annuity plan from its stable at that stage or transfer it to any other company. The annual premium contributions offer tax breaks. At the end of the accumulation phase, one-third of the corpus is tax-free on withdrawal and the remaining is on an annuity which is treated as income. 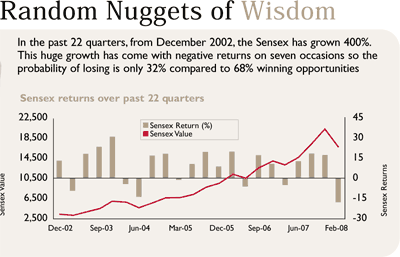