Sebi has gone on record to say that it’s working on the details of a variable mutual fund structure, triggering renewed hopes among investors.

Once again, market watchdog, the Securities and Exchange Board of India (Sebi), is trying to help ordinary investors. It has gone on record to say that it’s working on the details of a variable mutual fund structure, triggering renewed hopes among investors that there will be no exit or entry loads when they invest in fund schemes in the future.

But readers will remember (Free Entry, 21 September 2007) that Sebi had earlier tried to waive entry loads for investors who wanted to bypass the distributor and directly approach the asset management company (AMC).

That move had had its share of flaws. First, very few AMCs opened up to direct selling, and those that did, looked only at online customers, restricting the option. Next, the trailing commission, a recurring charge for fund investors that usually goes to the distributor, was still deducted because of accounting systems, despite the direct investment. Finally, for new fund offers, the fund houses came up with innovative ways of keeping only the first day of collection for direct sales. From the next day on, they started using the distributors as sales channels.

Sebi’s new proposal seeks to keep a check on the commission paid. It thinks this should depend on the quality and extent of service. AMCs charge investors a load to cover the distributors’ commission, marketing costs and fund management charges. At present, debt funds mostly attract an entry load of up to 1% and equity funds, 2.25-2.75%. An AMC usually charges an exit load or trailing commission if an investor redeems his investment before the stipulated maturity.

Variable charges are a norm in many countries, particularly in developed economies where the markets are mature. “In other markets, there is a choice for investors and different loads are charged for different services. We are working on that,” explains Sebi’s executive director, Radhakrishnan Nair. This means that Sebi will leave the negotiation of charges to investors and distributors (it does, however, stipulate a maximum of 6% on the loads to be charged), making the fund distribution business similar to the haggling in a wholesale vegetable market.

The new initiative proposes to have space on the investment application form, where the mutually decided load will be stated, and will be signed by both the investor and the distributor. “Variable load structures across all classes will allow an investor to negotiate the entry load based on the nature of service and advice on offer,” argues A.P. Kurian, chairman, Association of Mutual Funds of India.

This move puts bargaining power into the hands of the small investor. At present, large corporations and high net worth individuals enjoy several advantages. For instance, big corporate investors don’t face an entry load as they make large investments, and retail investors, therefore, often end up subsidising the corporations. The new proposal could bring loads down to zero in a host of funds, but distributors may start levying a fee on some funds, such as fixed income funds, which do not attract loads right now.

While this may seem like good news for the small investors, the fund industry feels that the time is not appropriate for such an initiative. They think that the Indian fund industry is not mature enough for variable charges. “This business cannot do without distributors and if they don’t see the money in the business, the money will not come easily to funds,” says the chief marketing officer of a fund house.

It’s certainly true that mutual fund investing is still distributordriven, so unless Sebi finds a way to keep them happy, this latest initiative from the stock market regulator may go the way of its predecessor and die for lack of oxygen.

The magic of 3G

After months, if not years, of wrangling, 3G mobile services have finally arrived in the country. State-owned Mahanagar Telephone Nigam Limited (MTNL) has launched Jadoo, a 3G service for highend users in Delhi, and a Mumbai launch is expected soon. The much awaited 3G spectrum auction for private players is also likely to happen soon and there could be up to 12 such service providers.

Jadoo promises subscribers high-speed Internet on 3G-ready mobiles, video-calling, video surveillance and live TV. Subscribers will need to buy a separate SIM for 3G, but can retain the existing numbers. But if the 3G service scores over GPRS in terms of speed and quality, expect to pay a lot more for it. Should the existing MTNL subscribers opt for 3G? You will get much better services, at a faster pace than you'll get with the current 2G. So it all depends on whether you are willing to shell out a whole lot more. In case your pocket doesn't allow it right now, wait for more players to enter the market. The competition should hopefully lead to price cuts.

The new pension scheme for the general public, which is set to open from 1 April 2009, has decided on six new fund managers. These were being scouted for after the regulator shortlisted 23 institutions as point of presence (POP) firms to distribute this plan. The six players comprise three each from the public sector (UTI, SBI and IDFC) and the private sector (Reliance, ICICI Prudential and Kotak Mahindra).

All the players will have to offer to manage the fund at a floor price of 0.009% of the total assets under management. A fund manager in the new pension scheme will make Rs 9 lakh for managing assets worth Rs 1,000 crore. Compare this with the Rs 22.5 crore that an equity mutual fund manager makes to manage the same amount. The difference in the earnings potential of the fund managers makes it obvious that cost-wise, this will be the most economical long-term savings product that will be open to the general public. 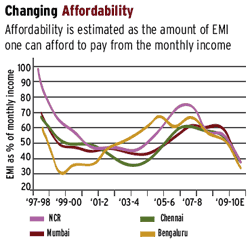 Residential property prices have come down by up to 30% over the past four months, according to realty consultant Jones Lang LaSalle Meghraj (JLLM). However, most of the correction has happened in new projects, and it is not the ticket price, but the transaction rates, that have come down. This means that you get a discount only when you sit across the table with money in hand. "Price corrections are more pronounced in new launches than in existing projects, which are mostly sold to end users or investors, and hence, are cost covered," says JLLM chairman and country head, Anuj Puri.

Weak sales last year and a virtual standstill in credit lending during Oct-Dec 2008 have forced developers to cut asking rates. Many of them have shifted focus towards affordable houses, though construction and land costs (mainly acquired over 2006-8) are still high. "We expect Rs 1,800-2,000 per sq ft as the minimum pricing level in the current market," says Puri. Since October, houses have become more affordable due to a sharp correction in prices, reduction in mortgage rates and smaller unit sizes per apartment.

In a bid to adapt to the changing market conditions, companies are trying to raise funds innovatively by turning to old methods. For investors, these instruments offer opportunities for investment. One such instrument is the five-year secured non-convertible debentures (NCD) offered by Tata Capital, a non - banking finance subsidiary of Tata Sons. With interest rates of 11-12%, the NCDs offer superior returns compared with bank fixed deposits, though they are riskier. However, interest rates on five-year bank deposits now range from 8.25-10.25%.

There are four options to choose from, based on the periodicity of payments and the minimum amount that can be vested. The cumulative option seems most attractive as it allows reinvestment of the interest proceeds at high coupon rates of 12%. The NCDs are being offered only in a demat format, so you need to have a demat account before applying. This will ease liquidity if you wish to sell the debentures before maturity as the NCDs are proposed to be listed and traded on the NSE. Another benefit is that the tax deduction will be on the interest paid and based on the investor's income slab. As the company intends 100% allotment for investors who put in less than Rs 1 lakh, many small investors can gain from the high coupon rate. Launched on 2 February, the issue closes on 24 February.(* Interest is payable per annum;  for individuals in the highest tax bracket;
maturity period for investment in five years) 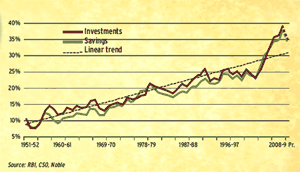 Click here to Enlarge
The recent increase in savings and investments has helped economic growth. Noble Group says in FY09, India's rates will moderate by 3-4%, but revert to long-term rates by H2FY10.

A buyer is entitled to a refund of the cost of a product if it suffers from manufacturing or recurring defects, says Delhi's Consumer Commission. "The permanent solution is to ask for refund and not replace the product with a new one or goods free from any defect, as the possibility of the new product being defective or not being up to the consumer's satisfaction cannot be ruled out," said the commission headed by Justice J.D. Kapoor. If the sold goods require frequent repairs, they can be termed defective, warranting either replacement or refund, added the commission.

The observation came after an appeal by the Confident Dental Equipment Ltd, a medical equipment manufacturer, which had earlier been asked by a district consumer forum to pay Rs 1.75 lakh as compensation, including the cost of a surgery chair, to a Delhi-based dentist, Devesh Jain.