Time for a realty check

When it comes to affordability - whether you are waiting for prices to come down or take a home loan, or even if you are repaying one - this year is turning out to be better than the previous one.

With the economic downturn hitting the housing sector hard, the people aspiring to buy homes must continue to wait and watch. However, when it comes to affordability — whether you are waiting for prices to come down or take a home loan, or even if you are repaying one — this year is turning out to be better than the previous one. 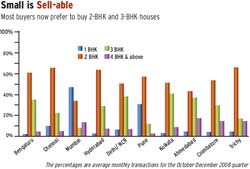 The recent cuts in the repo rate and cash reserve ratio by the Reserve Bank of India have meant that a slew of banks have slashed their home loan interest rates. Until now, the advantage was limited to fresh loan seekers. Not anymore. The LIC Housing Finance has been among the first to extend lower rates to its existing customers—the company recently cut its rates by 0.75%. The interest on floating rate loans ranges between 8.75% and 10.75%, depending on the loan amount. "These revised rates are the lowest in almost two years," Says R.R. Nair, director and chief executive officer, LIC Housing Finance.

More recently, HDFC has reduced its retail prime lending rates by 50 basis points. "In the current environment, there is a time gap between the reduction in the marginal cost of funds and the portfolio cost," says Renu Sud Karnad, joint managing director, HDFC. "The marginal cost of borrowing had come down earlier this year and the same was passed on to our new customers through our special limited period offer (rates beginning at 9.5%). We are now seeing a reduction in the costs on a portfolio level," she adds.

After the downswing in the home loan interest rates, the property prices have begun to show a similar trend. While discounts (on the quoted rates) have been offered for six months now, developers have begun reducing the quoted price on new project launches, even if it means refunding part of the amount to investors who had bought earlier at higher rates.

DLF has launched two projects, in Bengaluru and Hyderabad, in the past three months in the price range of Rs 1,850-1,890 per sq ft. "These prices are lower than the prices in 1998," says Rajeev Talwar, executive director, DLF. Similarly, the project launched recently by Unitech in Mumbai is selling at Rs 9,900 per sq ft compared with the market rate in the area, which is Rs 18,000 per sq ft. "Unitech is focusing on the affordable housing segment since the demand for the luxury segment has come down significantly," says a company spokesman.

"The market might not be bouncing back as yet, but because of these project launches, the movement has begun. This is providing confidence to the buyers," says Anshuman Magazine, CMD, real estate consulting firm CB Richard Ellis.

Whether the new projects will actually be delivered on time will depend on how well the companies raise finances to complete them. In the past three years, some developers have bid for prime land and are now paying for their optimism. While the acquired land has been losing value, the sales in existing projects have not picked up.

Recently, real estate developer BPTP Group backed out of the country's most expensive land deal worth over Rs 5,000 crore with the Noida Authority in Uttar Pradesh due to the unavailability of funds. DLF, which has paid large advance payments to various governments for townships and commercial projects, is now looking for refunds. Delhi's mega convention centre to be built by DLF has been scuppered as the government is unwilling to let DLF seek a foreign equity partner. Emaar MGF, the developer for the Commonwealth Games project in Delhi, wants a rescue package from the government because it could not raise enough funds from the sale of flats.

So, as far as the potential property buyer is concerned, apart from looking at the lower rates being offered, it's the track record of the developer that must be factored in.
— By Rakesh Rai and Sushmita Choudhury