The Indian Rupee depreciated by 1.37 percent in the last fortnight owing to buying of greenback by banks and importers that kept the Indian Rupee pressurized. Moreover, weak trading in the Asian markets governed the trend of the Indian markets and its currency. 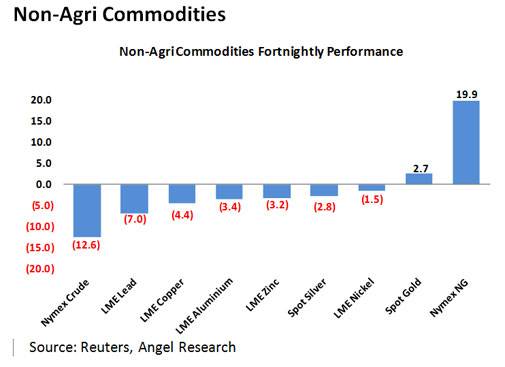 On a fortnightly basis, the global equity markets traded on a negative note owing to number of global developments that prompted the traders to place risky bets.

The Indian Rupee depreciated by 1.37 percent in the last fortnight owing to buying of greenback by banks and importers that kept the Indian Rupee pressurized. Moreover, weak trading in the Asian markets governed the trend of the Indian markets and its currency. Domestic markets i.e. Sensex and Nifty ended on a negative note owing to volatility in the Chinese markets after the disappointing release of manufacturing data that kept the Asian markets including India pressurized.

China added more gold to its reserves in December, bringing its total purchases in the second half of 2015 to more than 100 tonnes, and the country will continue purchasing at a similar pace this year. A wave of risk aversion due to growth worries in China and rising tensions in the Middle East triggered demand for the metal, despite the stronger U.S. dollar. Rising tensions in the Middle East and a sharp drop in stocks following weak Chinese data that fueled concerns over global growth.

Last fortnight, LME Copper prices plunged more than 4 percent to 12-year low levels as survey showed that China's services sector expanded at its slowest pace in 17 months in December, following weak factory data, which shrank in December for the tenth month in a row. Further, People's Bank of China set the Yuan's official midpoint rate at its weakest level in four and a half years, signaling that the economy is weaker than expected.

However, sharp losses were cushioned as nine refiners in China agreed to reduce sales of spot metal in the next quarter by a combined 200,000 metric tons. The move comes as prices have fallen below production costs and smelters want to support prices. This comes in addition to earlier decision wherein Copper suppliers including Jiangxi Copper and Tongling Nonferrous Metals Group have pledged to reduce output next year by 350,000 tons. MCX copper prices plunged by 3.8 percent in the last fifteen days in line with international trends.

In the past fortnight, WTI oil prices declined by around 13 percent while MCX crude oil prices rose by 11.23 percent. Prices fell to 12-year lows as new financial market tumult in China brought a $30 per barrel within view of the global investors. Global oil benchmark Brent and U.S. crude futures fell to nearly $32 a barrel on Thursday, their lowest since at least 2004, after another free fall in the Chinese stock market rattled investors already concerned by the world glut in oil.

Outlook
We expect gold prices to trade higher as falling Chinese equities, slowdown in growth and weak manufacturing data are all push factors for gold. Crude oil prices are likely to trade weak on bearish sentiments on account of oversupplied oil markets, weak growth in China and the Euro area, while rising inventories in the OECD nations also remains a cause of concern.

We expect base metal prices to trade lower as string of weak economic data from China will exert pressure. Also, investors will be cautious ahead of crucial data releases from the US and GDP data from China. Rabi sowing this year is lagging behind compared to last year sowing due to lower soil moisture and warm winter. As per the latest data by government, rabi crops is sown on 56.49 million hectares (mha), around 3 per cent or 1.8 mha less than compared last year. The most affected states are UP and MP.

During last fortnight, the most active NCDEX Chana April delivery contract closed lower by 2 % to close at Rs. 4,396 per quintal.  Chana prices decreased as newly harvested Chana crop starts hitting Karnataka coupled with increased supplies from imported as well as seized pulses in country. As per data release by Agriculture Ministry, Chana planted 81.08 lakh tonnes (lt) so far, compared with 79.95 lt last year as on Jan 01. The acreage under chana reported higher in Maharashtra, Andhra Pradesh and Karnataka compared to last year's acreage but slightly lower in Rajasthan and Madhya Pradesh as per data released by respective state agriculture department.

Soybean price for February delivery on NCDEX gain about 4.6 per cent, during the last fortnight on higher supplies and subdued demand from oil mills. Moreover, lower demand for soy meal and higher import of vegetable oil too pressurize soybean price.

The latest data compiled by the Solvent Extractors' Association of India (SEA), export of soya meal has touched a record low at 61,556 tonnes in the first nine months of 2015-16 - down 86 per cent from 4,44,736 tonnes in the same period last year. Similarly, the soybean on Cbot also falls about 0.26 per cent during the fortnight to close at $8.7950 per bushels, as weather in Brazilian soybean-producing regions is favorable. Weather conditions is expected to remain favorable and may support soybean output in Brazil which could hinder exports of US soybeans and negatively influence futures prices.

During last fortnight, most active mustard seed Apr'16 contract on NCDEX down about 2.7 per cent to close at Rs. 4,161 per quintal. This loss is due to lower demand for the mustard oil in the domestic market coupled with lower export demand for meal. As per the latest data release by Department of Agriculture, Rajasthan, the area under Rape & Mustard lower by 2.5 per cent compared to last years' area. This year the target of sowing in Rajasthan is 27 lakh ha against five years average of 25.48 lakh ha.

Soy oil price for Feb'16 delivery on NCDEX falls by 2.6 per cent to close at 600.6 per 10 kg during last fortnight. The fall is mainly due to continued weak global cues and lower physical demand. Moreover, record imports of the vegetable oil during the current financial year too pressurizing prices.  In CBOT, the soyoil prices for the most active Mar'16 contract decreased by about 3.64 per cent during the fortnight to close at 29.64 cents per pound. Weakness in soyoil is due to stronger dollar and weak export demand for the US soyoil.

The CPO prices on MCX for January delivery increase by 0.2 per cent to close at Rs. 411.4 per 10 kg in last fortnight. The price mostly remains sideways and traded in a tight range due lower demand from the stockists and retailers due to sufficient stocks in the country. However, Malaysian Feb'16 palm-oil futures surged about 2.09 per cent to close at 2,435 Ringgit / tonne. Malaysian palm oil futures drop due to concern over weak export demand from China and a narrowing spread between the palm oil and soyoil.

Among softs, cotton and kapas traded on mixed note during the last fortnight. During last fortnight, MCX Jan'16 delivery contract closed 0.7 per cent higher while NCDEX Kapas fall 3.2 per cent to close at Rs. 857 per 20 kg. The reports of better exports figures to Pakistan and of better demand for good quality cotton supported the prices. Kapas fall on slowing demand for Gujarat cotton from south Indian mills due to quality issues and now trying to import cotton from Africa. ICE cotton traded lower on concern over Chinese demand and strength in dollar.

Bullishness in sugar continue this fortnight too as NCDEX Mar'16 delivery gain 5.2 per cent to close at Rs 3,198 per quintal. The increase is due to good intake by the industrial buyers on expectation of lower production this year. Increase in ethanol blending in petrol to 10 per cent also positive for sugar prices as some of sugarcane may diverted to produce ethanol. However, ICE raw sugar Mar'16 falls by 4.55 per cent during last fortnight due to expectation of lower demand from China and favorable weather in Brazil to wrap up the crushing season.

During the last fortnight, spices complex traded mostly mixed where Cardamom and turmeric prices increased while coriander and jeera prices falls. Cardamom price surged about 17.6 per cent on tight supplies as imports were quite limited putting more pressure in domestic production. Cheap imports from Guatemala did not hit the market due to late harvest. Coriander prices falls about 17.6 per cent on expectation of better production this year. Jeera prices were down too due to limited export demand and good progress of crop in Gujarat and Rajasthan. Turmeric gain a little during the last fortnight due to god upcountry demand and quality arrivals.

We expect chana prices to trade sideways to lower as expectation of good crop progress in the country coupled with arrivals of imported chana in Indian ports.

Soybean prices may down due to higher arrivals and subdued demand. Lower demand for meal exports and sufficient edible oil stocks too pressurize prices in domestic market. There is expectation of increase in import tax for vegetable oil, which may support price.

We expect CPO prices to trade sideways to due to weak edible oil demand at higher prices. Internationally, it is expected that the demand for China may lower in coming months due to weak economy.

We expect cotton prices to trade sideways to lower on weak demand from South India mills. However,   rising export demand from Pakistan and other Asian countries and report of falling output in the country may support prices.

Among spices, Jeera futures may trade sideways to down due to subdued demand for lower quality cumin coupled with good progress of jeera crop in Gujarat. Turmeric may trade higher on good upcountry demand. For cardamom, higher export demand and limited cheap imports may be bullish for coming weeks. Lastly, coriander may trade sideways to lower on concern over improved sowing progress.