On a fortnightly basis, global equity markets traded on a negative note owing to number of unexpected movements in the international markets. On a fortnightly basis, global equity markets traded on a negative note owing to number of unexpected movements in the international markets. The US Federal Reserve kept the interest rates unchanged and acknowledgement the risks such as plunging oil prices and turmoil in Chinese economy that is likely to hamper America's economy. From the Euro-zone, the European Commission cited slowdown in emerging economies which is posing a major threat to recovery in the euro area.

The commission trimmed its 2016 growth forecast to 1.7 per cent from 1.8 per cent. Bank of Japan Governor's surprised the market by adopting negative interest rates for some depositors. From the UK's front, the ongoing debate in the House of Commons over the UK-EU Referendum has drawn a mixture of responses from attending MPs. UK's PM was praised on provisionally finalizing the complex terms of the vote.

The Indian Rupee depreciated by 0.3 per cent in the last fortnight as freefall in crude oil prices hurt risk appetite across the globe. Also, month end dollar demand from importers mainly oil refiners and banks amidst lower greenback overseas affected the rupee value against the dollar. Moreover, weak trading in the Asian markets governed the trend of the Indian markets and its currency. There has been a sharp selloff by FIIs thereby bringing the markets close to a bear hug as the fear of a global deflation is driving away foreign investors.

In the past fortnight, spot gold prices surged by around 7 per cent as investors anticipated that sharp declines in oil and equity prices made it more likely that the Fed will tighten monetary policy at a slower-than-expected pace this year. At the latest FOMC meeting, the US Federal Reserve said it was "closely monitoring" global economic and financial developments, and held interest rates steady as expected. Further, data showed China's net gold imports for December via main conduit Hong Kong surged to the highest in more than two years. Besides, the European Commission said growth in the euro zone and the wider European Union will be slightly weaker this year than previously forecast, adding to global concerns. MCX gold prices rose by 6 per cent to close at Rs.27623 per 10 gms.

LME Copper prices jumped by 4 per cent in the last fortnight as China's purchases of copper increased 34 per cent from a year earlier to 423,181 tons, the most since at least 2008. Also, the head of China's top economic planning agency that the country's target for economic growth in 2016 remains in a range of 6.5% to 7%. Also, China said it would reduce the minimum down payment required for first- and second-time home buyers in most cities, a move aimed at clearing a housing glut. Besides, investors anticipated possible supply issues for copper after news that the Indonesian government is demanding a $530 million deposit for a new smelter from Freeport McMoRan Inc before renewing the US company's export permit for copper concentrate. However, the optimism was short lived after news that Freeport-McMoRan Inc. is seeking to postpone the payment on a new copper smelter in Indonesia as talks to extend an export permit near completion. MCX copper prices traded higher by 5.6 per cent in the last fifteen days.

In the past fortnight, WTI oil prices declined by 0.7 per cent while MCX crude oil prices rose by 1 per cent. Prices fell in the international markets as after a report that the White House might include a $10 per barrel oil fee in a 2017 budget proposal. Also, Saudi Arabia on Thursday cut prices for its best-quality crude oil destined for customers in Europe and Asia amid uncertainty about whether the Organization of the Petroleum Exporting Countries will meet to discuss action to raise oil prices. Losses were restricted owing to hopes that members of the Organization of the Petroleum Exporting Countries and producers outside the cartel may reach an agreement to cut output to stem the persistent slump in oil prices. Russia indicated there was a possibility of co-operation with OPEC, fanning hopes for a deal to reduce a global oversupply sent prices to the lowest levels in over a dozen years last week.

Recent gains in the SPDR gold trust is an indication of rising investment demand. Also, mixed jobs data and slow growth in the US service sector raises concerns about the US economy in turn raising the safe haven status of the yellow metal.

Crude oil prices are likely to trade higher as talks about cutting its oil output by Russia and other OPEC members will act as a positive factor. Also, low volatility owing to China's Lunar New year holiday will restrict sharp negative movement.

We expect base metal prices to trade higher as recent stimulus measures by BoJ and PBoC will spur risk appetite. Also, dovish comments from Federal Reserve Bank of New York President William Dudley along with thin volumes owing to Lunar New Year holiday will be supportive. During the last fortnight, most of agri-commodites traded on negative note on anticipation of higher rabi crop arrivals and subdued export demand from Indian markets. Overall, global economy is also putting pressure on the prices. As per IMD forecast, rain or thundershowers are very likely over the plains of North-West, East, and South Peninsular India from Feb 9.

The most active NCDEX Chana April delivery contract closed lower by 5.1 % to close at Rs. 4,075 per quintal.  Chana prices decreased as newly harvested Chana crop starts hitting the market coupled with increased supplies from imported as well as seized pulses in country. Chana sowing this year is same as last year but expectation of good climatic conditions this time around may keep the production at higher levels.

Soybean price for March delivery on NCDEX slipped a little and closed at Rs. 3,814 per quintal, during the last fortnight on subdued demand from oil mills. Moreover, lower export demand for soy meal and higher import of vegetable oil too pressurizing soybean price. The latest data compiled by the Solvent Extractors' Association of India (SEA), export of soya meal has touched a record low at 69,263 tonnes in the first ten months of 2015-16 - down 87 % from 5.49 tonnes in the same period last year. However, CBOT Soybean ended higher during the last fortnight on reports of excessive dryness in Brazil and encouraging US exports to China.

The most active RMseed Apr'16 contract on NCDEX down about 3.2 per cent to close at Rs. 3,858 per quintal. This loss is due to anticipation of bumper crop this season coupled with lower demand for the mustard oil at higher levels as competing edible oil are at lower levels. Lower demand for meal exports too pressurizing prices. As per latest government data release, area coverage of RM seed this year is little lower at 64.8 lakh hectare (lh) compared to 65.14 lh sown in last year.

Ref. Soy oil price for Mar'16 delivery on NCDEX gains 1.8 per cent last fortnight to close at 620.15 per 10 kg. The gain is mainly due to weaker rupees making the import little expensive coupled with fresh demand from the stockists.  In CBOT, the soyoil prices for the most active Mar'16 contract gain by about 1.30 per cent during the fortnight to close at 31.09 cents per pound. Prices for soyoil, which for fuel and cooking, gains on reports of increasing demand amid reduced production of soyoil's rival, palm oil.

The CPO prices on MCX for February delivery increase by 8 per cent to close at Rs. 463.4 per 10 kg in last fortnight. The prices have surged on weak rupees and reports of less production estimates in Malaysia and lower exports data from Indonesia due to increased local consumption.

Among softs, cotton and kapas traded on negative note during the last fortnight, as local demand is limited as south Indian mills are importing quality cotton. There is reports lower demand at prevailing levels despite lower estimates of cotton output. Cotton Advisory Board estimates cotton production at around 33 million bales (170 kg each) for the October 2015-September 2016 crop year against 38 million bales in the previous year. ICE cotton traded lower on concern over Chinese demand and reports of higher acreage in coming season.

Bullishness in sugar halted this fortnight as NCDEX Mar'16 delivery closed down by 3.8 per cent to close at Rs 3,053 per quintal. Supply pressure from the sugar mills coupled with limited demand was the main cause of this correction. As per ISMA, Sugar production in India rose by 4.54 % to 14.25 mt in the first four months of the current marketing year. Recently, government increased sugar cess by Rs. 100 per quintal to fund a subsidy programme for mills. Recently, stockists are off loading stored sugar in the market as prices have improved due to increase in cess. Similarly, ICE raw sugar Mar'16 falls by 8.9 per cent during last fortnight due to expectation of higher production in Brazil's than previously forecast, offsetting bullish downward revisions in supply projections for China, Thailand and India.

During the last fortnight, spices complex traded on negative note except Turmeric.  The uptrend in turmeric is due to arrival of new season crop fetching higher prices.  Cardamom price falls the most mainly due to profit booking as imports increased form Guatemala. Coriander prices to fall on want of further export orders and expectation of better production. Jeera prices were down too due to limited export demand and good progress of crop in Gujarat and Rajasthan.

We expect chana prices to trade sideways on expectation of good crop progress in the country however; good demand may keep the prices supported at higher level.

Soybean prices may trade sideways to down due to higher arrivals and subdued demand for meal exports. Weaker rupees may support prices at higher levels. Meanwhile, CPO prices may also trade higher on reports of lower production.

We expect cotton prices to trade sideways to lower on weak domestic demand. The prices may improve a bit on reports of lower production estimates.

Among spices, Jeera futures may trade sideways to higher on anticipation of improved exports for new season crop. Turmeric may trade higher on good upcountry demand and arrival of quality turmeric. Cardamom may trade lower on improved supplies form imports. 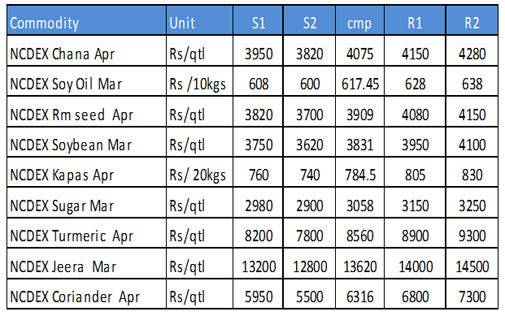 (The writer is Associate Director of Commodities and Currencies, Angel Broking)

Make in India, Spare the Patients

Who is to be blamed - Mohan or the Start-up?