Macro wounds: Is too much focus on growth hurting?

To be sure, quantitative easing - central bank money printing - had an important role to play in nursing economies back from the 2008 credit crisis.

Shreenivas Kunte
Financial market disruptions have increased the focus on growth. Some of the leading central bank policy makers are worried. They note that attempts to artificially revive growth have become increasingly dangerous and counterproductive. Extended usage of monetary easing tools in particular, used to facilitate growth, has lessened the efficacy of these tools. In some instances, this has led to asset bubbles. So much so that experts are discomforted that we may not know the fundamental value of an asset anymore.

To be sure, quantitative easing - central bank money printing - had an important role to play in nursing economies back from the 2008 credit crisis. But repeated taper tantrums in the financial marketplace have shown how difficult it has been for the world's biggest central bank - the US Federal Reserve - to change gears and reverse its growth-supportive, easy-money policies. It is a separate dilemma that easing by itself has been ineffective to boost economic growth and demand. The world's largest countries, for example, in the past several years, have added close to nothing to the world economy.

Given this background, the emphasis on growth among the world's leading policy makers who met at the G-20 finance ministers meeting in Shanghai in late February, is worth pondering over. Bank of England's Governor, Mike Carney's speech at the Shanghai G-20 summit, in particular, stands out for its critical appreciation on monetary policies. Carney shows in his speech how secular and cyclical forces have depressed "equilibrium" interest rates globally (Chart 1). 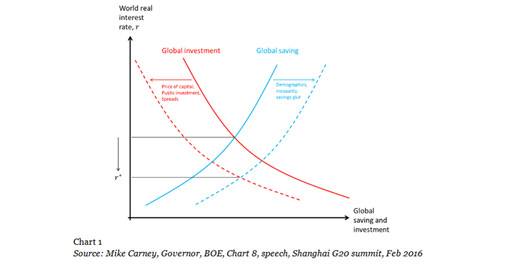 The speech suggests that an overabundance in savings and dwindling investment opportunities may be among the difficult structural constraints that central bankers are facing. These constraints may not go away soon. Income inequalities (both intra and international) and demographic transitioning have increased savings relative to available investment opportunities. It is interesting to note that the five central banks with unconventional policy rates below zero - Danmarks Nationalbank (DN), the European Central Bank (ECB), Sveriges Riksbank, the Swiss National Bank (SNB) and the Bank of Japan (BoJ) - also have to deal with ageing demographic profiles that belong to some of the topmost per capita income countries.

Post the G20 Shanghai summit in February, Reserve Bank of India Governor Raghuram Rajan, in addition to Carney, on a recent online blog has cautioned against the dislocations resulting from unconventional monetary policies. In particular, Rajan has raised a red flag with regard to volatile capital flows and asset bubbles in emerging markets that are created from such policies. It remains to be seen if Rajan's call for formal coordinated action amongst policy makers, on the lines of the Bretton Woods agreement, is taken up by his colleagues.

It is interesting that Mervyn King, the former Bank of England governor, too, in his recently released book, has highlighted the limits of policy making and has called for reforms in global economic institutions, including the International Monetary Fund. According to King, a continued disequilibrium between the supply and availability of funds, misallocation of capital could create a newer crisis.

Economic activity pertaining to many of the 50-100-year-old inventions, such as electricity and antibiotics, hygiene and education, has not reached sizeable proportions of the world population. This activity is bound to pick-up and economic growth is inevitable in these countries. But unconventional central bank actions in the developed world are creating additional hurdles against economic development in the underdeveloped countries. Quantitative easing-driven, yield-seeking capital flows to and from emerging markets are guided by profit seeking and relative short-term attractiveness. This has rendered capital flows more volatile. Managing unpredictable externalities from developed world easing has, therefore, posed at least three, somewhat related and influential challenges - exchange rate pressures and foreign reserve losses, weaker export trade and asset (mainly equities) price volatility.

Coordinated action among decision makers can ease some of the pressure that policy makers as well as commercial enterprise in emerging countries face. Investment decision makers, on the other hand, will need to carefully evaluate the macro-micro opportunities and challenges that result from these changes.

Channelising CSR funds to the growth of MSMEs