The beginning has already been made by PSEs primarily in the energy and transport sector, more such initiatives will be needed to chart the way for transitioning India to a low carbon economy 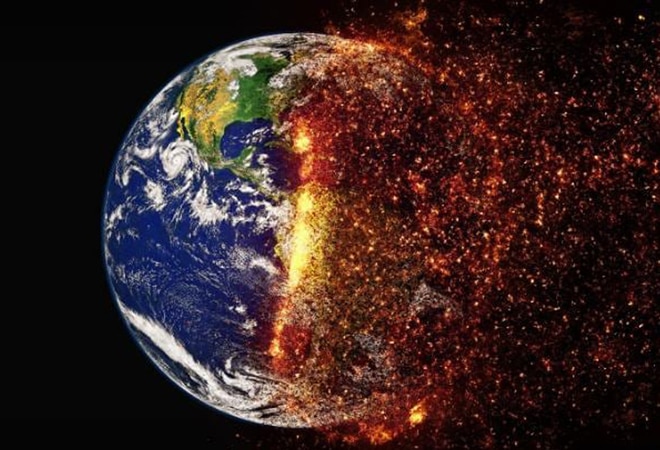 While PSEs are doing their bit, it is important to provide them the necessary support and hand-holding to give a meaningful conclusion to their efforts

Climate Change is shaping the future by creating a strong impact on societies across the world. An uncomfortable preview of climate change is already being seen in the form of increasing global warming, rising sea levels, extremities of storms and cyclones etc.

The present (COVID-19) pandemic has also been attributed partially to the abused use of nature and its resources. Given the rising awareness and collaboration of countries to mitigate climate change, it would not be an understatement that climate change will shape the 21st century agenda through focus on mitigation, adaptation measures to counter violent climate disruptions.

Understanding the importance of immediate climate action, the government has also embraced the goal of achieving climate change mitigation, adaptation and sustainability by ratifying the Paris Agreement in 2015.

India, as part of its Nationally Determined Contributions (NDC), has set three quantifiable targets, including target of reducing the emissions intensity of its GDP by 33 to 35 per cent by 2030 from 2005 level; achieving 40% installed capacity from non-fossil fuel sources; and creating an additional carbon sink of 2.5 to 3 billion tonnes of CO2 equivalent through additional forest and tree cover by 2030.

In order to achieve India's NDCs, government agencies and bodies including NITI Aayog, Ministry of Statistics and Programme Implementation (MoSPI), state governments etc. have been leading discussions for developing national indicators for the Sustainable Development Goals (SDGs). Further, the Ministry of Environment, Forest and Climate Change will be monitoring the progress in achievement of NDC targets with help of other national ministries and state governments.

With growing environmental concerns and radical climate change, it has become imperative for every country to be proactive in its efforts to adapt policies that would help in mitigating climate change. A sectoral analysis of greenhouse gas (GHG) emissions reveals that the energy sector contributes 73% to the emissions, followed by agriculture at 16%, Industrial Processes and Product Use (IPPU) at 8% which includes industries in chemicals, minerals, electronics etc and lastly waste sector which contributes 3% to the emissions.

To curb emissions, it is imperative that a sectoral approach is adopted  to target the most polluting sectors first. From the above analysis, it is clear that the energy sector being the primary contributor has a larger role to play in achieving climate change mitigation. To address the challenges arising due to climate change  the key requisite is to effectively engage all stakeholders of the economy and encourage them to adopt a proactive role to achieve national targets. 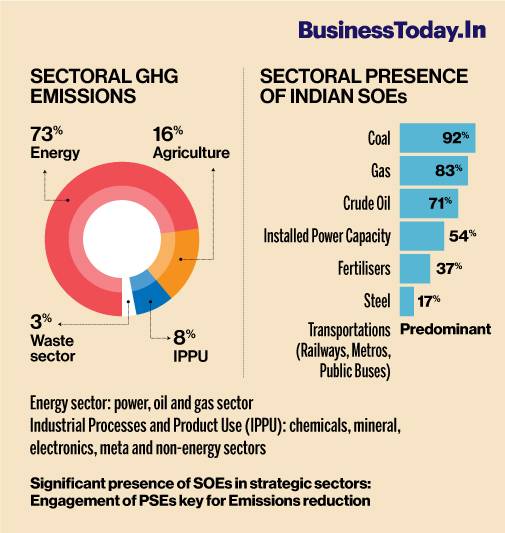 Indian Public Sector Enterprises (PSEs) are significant stakeholders in the Indian economy, contributing nearly 13% to the Indian GDP in terms of turnover. PSEs have been key drivers of economic development and have been frontrunners in supporting the government on a high growth trajectory of the country while ensuring social justice and equity.

They have a strategic presence across key sectors like oil, gas, energy, metals and minerals, and infrastructure and are also key drivers in achieving the sustainable development goals committed to by the country.

They also hold a dominant place in sectors like coal (92%), gas (83%), crude oil (71%) and installed power capacity (54%) which collectively form the energy sector. However, these sectors are 'hard to abate' areas  i.e. carbon emissions are inherent to the very nature of their operations.

This makes PSEs key contributors to GHG emissions in the country thereby making the process of decarbonisation not only slow but also difficult. It may also be mentioned that in a Reuters' report on 'Global 250 Greenhouse Gas Emitters' (October 2017) featuring 250 global companies that significantly contribute to global GHG emissions, three Indian PSEs feature in the top 100 list of companies with highest CO2 emissions.

This implies that the role of Indian PSEs in reducing GHG emissions will be of paramount importance to make meaningful progress towards meeting India's climate goals.

Despite being in strategic sectors where emissions are inherent, PSEs have been taking significant steps towards reducing GHG  emissions. Many PSEs have adopted "Environmental Policy Statement" as a part of their corporate strategy thereby integrating climate change mitigation into corporate policy.

Further, in addition to mass-scale awareness campaigns across various levels, significant steps have been taken by PSEs in various sectors to contribute to the national commitment of climate change mitigation.

PSEs in the sector are also attempting to make a justified use of coal by exploring opportunities for clean coal technology and alternate use of coal. For this purpose, a consortium of select PSEs in the power sector is developing a highly efficient Advanced Ultra Super Critical Technology (AUSC) technology- first of its kind in the world.

In the transport and logistics sector as well significant leaps are being made to increase use of electrified vehicles and systems so as to reduce carbon emissions from the logistics sector. In this direction, Indian railways, one of the world's largest railway networks, has taken instrumental initiatives to make it a net-zero carbon emitter by 2030 and make the network 100% electrified by 2024.

Further, solar plants are being set up along railway tracks to electrify railways and technology is also being developed for the regenerative braking system. E-mobility is being increasingly encouraged by the government, as a result PSEs are actively setting up infrastructure and systems to make the initiative a success.

Many PSEs are setting up charging stations while exploring manufacturing and developing technology for e-vehicles. In the oil and gas sector, companies have been exploring the use of promoting the setting of biogas plants in addition to developing flare gas recovery systems for reducing flaring and fuel consumption. In addition to national targets, certain PSEs have also set individual company targets for reducing carbon emissions.

While PSEs continue to work towards a greener environment, it is necessary to direct their efforts in an effective way to increase their engagement in the climate change agenda by ensuring adoption of a more informed and result oriented approach.

This becomes even more essential as having government ownership provides both opportunities and challenges for the government when exploring options for transitioning to a low carbon economy.

Therefore, it is important to look at what capacities and nudges are needed by the PSEs to effectively respond to the climate change agenda and help them achieve low carbon transition.

There are many reasons for the need for PSEs to actively participate in the climate agenda.

The second is to maintain competitiveness. PSEs may face competition from other companies and hence, prioritising low carbon investments will improve cost competitiveness and reduce business risks.

Third, is developing climate-resilient infrastructure. For example, PSEs in the electricity sector are involved in developing infrastructure for power generation, transmission and distribution networks which can be vulnerable to climate change and its related disruptions.

Hence, such PSEs may need to invest in making such infrastructure resilient to impacts of climate change.

Fourth, the high potential of contributing to national climate goals. Many Indian PSEs have high GHG emissions, thereby making them lucrative candidates for steering the implementation of national climate policy preferences and transitioning to a low carbon economy.

Fifth, PSEs role in and contribution to research and development is of paramount importance for low carbon transition. Since they are not merely driven by maximising profits and equity evaluation motives, PSEs can lead the way with research into and development of low carbon technologies.

The beginning has already been made by PSEs primarily in the energy and transport sector, more such initiatives will be needed to chart the way for transitioning to a low carbon economy.

While PSEs are doing their bit, it is important to provide them the necessary support and hand-holding to give a meaningful conclusion to their efforts. This necessitates a need for strategic reorientation of PSEs by successfully merging climate goals into development objectives, enhancing internal capacities on climate change and establishing linkages with best practices globally and with other PSEs.

What is unconscious bias in the workplace, and how can organisations address it?