Political parties at the end of the day are nothing but organisations in the "business of politics" trying to maximize shareholder wealth which Dalal Street and Wall Street and all other "streets" around the world believe to be very noble goals. 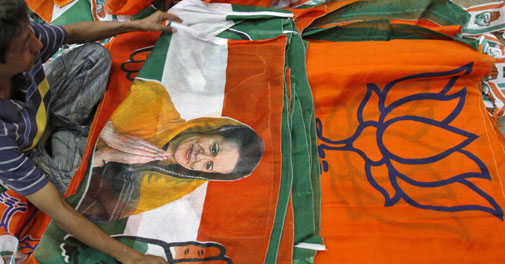 A worker looks at a Congress party flag carrying a picture of its party chief Sonia Gandhi next to flags of leading opposition Bharatiya Janata Party (BJP) inside an election campaigning material workshop. PHOTO: Reuters

Do you believe all these? The answer, mostly, will be NO! Then why do political parties frustrate us so much when they act against our interests (and in their own narrow interest) or do not make good on their election promises?

Political parties at the end of the day are nothing but organisations in the "business of politics" trying to maximize shareholder wealth, which Dalal Street and Wall Street and all other "streets" around the world believe to be very noble goals.

There are multiple points of resemblance between the plans and policies of business and political organizations and their implementation. Here, we have tried to take a quick look at various political parties through the lens of business to see how they stack up.

Would they be considered "successful" if they were seen as businesses? Would their actions and behavior be easier to understand if one were to look at party leaders as CEOs? And then, just like in business, these "CEOs" are trying to reach their purposes, which may be different for each?

THE CONGRESS is clearly the most successful family managed business in Indian politics. In family managed units, leadership and control remains the same while professionals keep being shuffled. There is resistance to an outsider gaining control. In case an outsider does become the CEO, the board will continue to be controlled by the family. Think of family managed political parties through this lens and one can understand some of their actions a lot better. It is more important to ensure the dominance of the family than worry about short term electoral success.

In this respect, the motives of parties such as the DMK, NCP, SP, Shiv Sena or SAD which are family managed would be similar. Ensuring the family's dominance will often drive away talent and lead to sycophancy.

Top management will often occupy the slot because of a surname rather than a proven track record or due to superior ability! However, just as many family run businesses are very successful, such political parties often meet with a lot of success. This is because of consistence of objectives, continuity of leadership, less infighting - as the cadre generally accepts the dominance of the family - a longer term view in decision making, etc. Being protective of the family legacy makes the top management focus on the long term and takes the element of short term thinking away, which is often the hallmark of transient management. Family run businesses like the Tatas, Birlas, Reliance etc can be assessed similarly.

THE BHARATIYA JANATA PARTY (BJP) on the other hand, suffers from a confused set of objectives again largely due to its ownership structure. The RSS while being the promoter is never clear if it wants to claim ownership of this "business."  This often seems to leave it confused on whether its priority is the furtherance of the Sangh ideology or electoral success.

In business terms the analogy would be that of a business that is not clear of how much it is driven by the profit motive as against a cause that it may stand for. This makes one think of government owned companies which have often not taken decisions that would make common business sense in the pursuit of a larger calling and have paid a heavy price for it. Think of the erstwhile development banks like ICICI, IDBI or IFCI and what became of them. They were entrusted with the larger goal of nation building, and they confused their own objectives, which led to inexplicable decisions. In many cases, it became an excuse for downright bad management decisions.

The BJP's ideology often gets in its way of reacting to the needs of the market and getting electoral success especially when coalition politics enters the picture. The leadership would like to appear "professional" but is often confused about how much they "report to the promoter". This again causes flip-flops on issues that skirt the core ideology for e.g. secularism, minorities, Kashmir, Pakistan. Remember Advani and his tryst with Jinnah?

THE COMMUNISTS remind us of a company with a great idea which has let others steal its market even as its idea gets more popular. Much like Kodak lost its ground to mobile companies even as cameras have become an essential appendage for everyone, the CPI seems to have become less and less relevant even as socialism and Maoism seem to be gaining ground with every election.

Everyone party today makes a claim to being the flag bearer of socialism in the country today, while the Communists get reduced to a niche market in three states.

Then what of the newbie AAM AADMI PARTY (AAP)? Everybody's darling turned everybody's favorite whipping boy. The AAP in our view is a start-up that has found a strong gap in the market that the fat cats of the business failed to understand. In any case the gap arises out of frustration with the way the incumbent behaves and in such situations the incumbent rarely manages to transform unless forced to do so.

Big telecom companies making place for new telcos or young private banks eating the lunch of the erstwhile banks come to mind as business parallels. In fact the AAP has got off to a dream start predicted by nobody. It is the David which slew the Goliath, very much like Nirma in the 1980s. However, having understood the gap and positioned for it perfectly, it now needs to understand that execution and customer satisfaction is key to sustainable success. The customer will try you once on a sales pitch but repeat business needs customer delight which Arvind Kejriwal and his team need to understand very quickly. Their first tryst with the market has come to an abrupt end with the resignation of the Delhi government but hopefully they will launch a "new and improved" version before the brand is relegated to the history books as a footnote.

At the end of the day, political parties, like great businesses must realise that their interests essentially need to be aligned with their customers. The ultimate sustenance of any business lies in customer delight. When businesses become arrogant and make supernormal profits without any consideration for customer satisfaction the market will correct itself and find a solution. This has happened again and again. 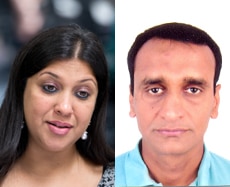 Or think of Ambassador cars or Rajdoot motor cycles. If political parties do not realise this then there will be a completely different face of Indian politics - like Arvind Kejriwal.

We believe that political parties are indeed businesses and that is fabulous for all! All that needs to happen is that they need to become well managed businesses again.

How to ensure best returns from mutual funds

Is the govt missing a chance to deregulate diesel?