Naveen Mathur Associate Director-Commodities and Currencies at Angel Broking says in the last fortnight, world market sentiments were mainly on a bearish tone as economic data from major global economies turned out to be negative or on a mixed note. Naveen Mathur
Non-Agri Commodities
In the last fortnight, world market sentiments were mainly on a bearish tone as economic data from major global economies turned out to be negative or on a mixed note. Further, slow economic growth in China which is world's second largest economy increased concerns over the global outlook and exerted downside pressure on the markets. In addition the geo-political tension between Russia and US kept a check on the markets. However, towards the end of fortnight, markets got some relief after US Federal Reserve Chairperson Janet Yellen stated that central bank will support economic recovery and hold interest rates for longer period. In the domestic markets, rise in retail and wholesale inflation data along with dollar demand from importers and it companies led to depreciation in the currency. Further, speculation of Reserve Bank of India (RBI) intervening the markets to buy dollars to increase its forex reserves acted as a negative factor. However, constant inflow of foreign funds into equities cushioned sharp negative movement in the currency.

Coming to performance of non-agri commodities in the past fortnight, we saw that Spot Gold prices traded positive in the first half of last fortnight and briefly touched $1330 mark. Bullion prices were also supported by escalating tensions in Ukraine, besides the FED minutes that showed that policy makers were not keen on raising interest rates. Prices were also supported by official-sector buying after Iraq's central bank said it might buy more gold in the next few months, having bought 60 tonnes over the past two months. However, prices started correcting heavily towards the end of fortnight as worries over economic growth and demand from top consumer China pushed metal prices lower towards $1300 mark.

In addition, prices were pressurized further on account of outflows from ETF's as holding managed by SPDR Gold Holdings Trust declined by around 10.75(1.33%) tonnes to 798.43 tonnes as on 16th April 2014. On the domestic bourses, prices gained by around half a percent on account of rupee depreciation equivalent to the gains in gold prices.

In contrary to the gains in gold prices, spot silver prices largely traded on a negative note and declined by around 1.5 per cent in the last fortnight due to waning interest by investors in the white metal. Also, the second half of the fortnight witnessed moderately low volumes as investors decided to be at bay and take profit off the table and celebrate Easter the widely celebrated festival in the international arena. Silver prices deviated from the base metals pack that traded largely on a positive note in-spite of weak economic data from China.

During the last fortnight, LME Copper traded on a flat note owing to easing of concerns of supply disruption after earthquake in the world's biggest producer, Chile. Also, rise in risk appetite in the market sentiments supported gains. While on the other hand, Chinese growth concerns along with jump in inventories by around 7 per cent kept a check on gains. Also, mixed economic data from US, UK and Euro Zone acted as negative factor. MCX copper prices rose by 0.3 per cent in last fifteen days owing to Rupee depreciation and closed at Rs.404.95/kg as on 17th Apr'14 at 5:30pm IST.

Nymex Crude oil prices gained by around 3 per cent and largely traded positive in the last fortnight. This positive move was on account of good economic data from the US. Positive retail sales data from the US which was at one and half year high also indicates strong performance in the US economy and lifted prices. In addition, money managers have been raising their bets on long side for crude due to escalating geo-political tensions between US and Russia. On the domestic bourses, prices gained by more than 2.5 per cent taking cues from NYMEX.

OUTLOOK
In the coming fortnight, we expect precious metals, to head lower while crude oil prices to trade up on the back of growth in the US economy which can exert downside pressure on the precious metals pack, while escalating geo-political tensions between US and Russia will support crude prices. However sharp upside in prices will be capped on account of weak economic data from China and OPEC lowering its forecast for oil demand in 2014 does not bode well for energy markets.

Base metals are likely to trade on a mixed note as Chinese slowdown concerns will exert downside pressure. While on the other hand, signs of US recovery will cushion sharp negative movement in prices. 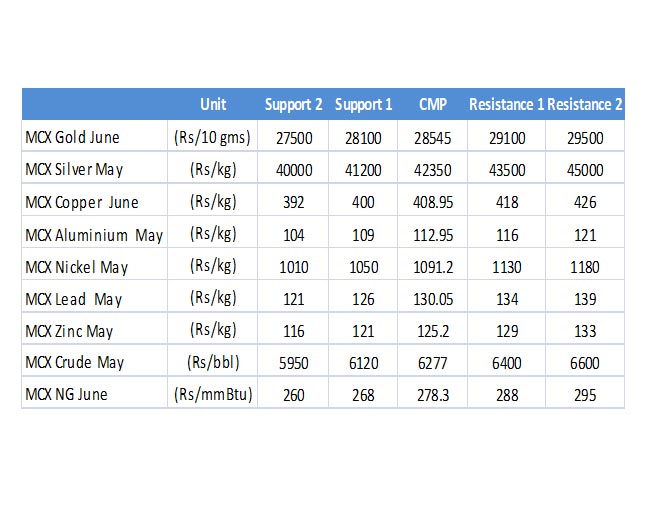 After witnessing huge volatility over the last few weeks, agri commodities consolidated over the last fortnight. Erratic weather conditions, unseasonal rains and hailstorms in the major producing states like MP, Rajasthan, Maharashtra and Karnataka as well as crop damage fears had led to a sharp upside in the prices.

Skymet, a private meteorological agency has forecast monsoon in 2014 to be below normal at 94 percent of average of last 50 years. It has also forecast a 25 percent chance of a drought in 2014. Also, there are fears of emergence of El-Nino conditions.

Among agri commodities, Soybean traded on a mixed to negative note. Prices declined from higher levels on profit taking coupled with weak soy meal export demand and settled 0.2% lower. However, tight supplies in the domestic as well as overseas markets supported prices at lower levels. Soy bean on CBOT gained 3.4% due to higher crushing as well as soy meal export demand. Mustard seed remained under downside pressure due to arrival pressure of the new season crop. However, higher edible oils limited the downside and settled 0.9% lower. Soy oil gained 0.9% taking cues from firm overseas markets coupled with some weakness in the Rupee. CPO remained mixed. Firm overseas markets supported prices while weak demand weighed on the prices and settled 0.4% lower. Palm oil prices on the BMD declined in the first half of the fortnight on weak March exports as well as higher stocks. However, pickup in exports in April led to a recovery in the prices in the latter half of the fortnight.

Among spices, turmeric was the largest gainer posting 7% returns due to a rise in the demand in the spot markets from domestic as well as overseas buyers. Lower arrivals in the spot markets also supported prices. Coriander gained 1.4% on crop damage and buying by stockists. However, prices declined from higher levels on profit taking coupled with rising arrival pressure. Jeera futures consolidated at lower levels. Prices have declined over the last few weeks on record output coupled with arrivals of the new season crop. However, overseas demand supported prices at lower levels and settled marginally lower 0.3%.

Among softs, Sugar which was on a bull rally since the last two months witnessed profit taking at higher levels and settled 0.9% lower. Rising supplies at higher levels as well as no fresh export demand since April have also led to a decline in the prices. Prices gained since Feb '14 on the back of rising summer demand from the bulk consumers coupled with lower output estimates. Cotton futures remained under downside pressure and lost 1.5% tracking weak Kapas prices due to increasing arrivals. Kapas on NCDEX also declined 1.9%.

OUTLOOK
In the coming fortnight, we expect prices of chana to recover from lower levels on bargain buying at lower levels. we also expect spices to gain on expectations of overseas demand in Turmeric and Jeera, while coriander is expected to gain on improved quality norms by the exchange. Edible oil complex is also likely to remain on the upside taking cues from positive sentiments in the global edible oil markets as well as tight soybean supplies in the domestic markets. However, sharp gains in mustard seed may be capped due arrival pressure.

Fears of emergence of El Nino may also lend support to the kharif commodities. Prices will also take cues from the monsoon 2014 forecast by the IMD, which is expected to be released around 25th April '14.

Prices may take cues from any data on the extent of crop damage due to the recent unseasonal rains and erratic weather conditions. Prices may also take cues from movement in the Indian Rupee. 'I have never gone over budget on any of my films'