In the non-agri commodities space, the yellow metal has gained grounds once again in the recent weeks and rose nearly six per cent this month.

Naveen Mathur
Global market traded on a mixed note for the last fortnight on the back of ongoing Iraq tensions, which exerted downside pressure on the market sentiments. Decline in economic growth in the US, world's largest economy, along with QE tapering of $10 billion by the US Federal Reserve in its meeting acted as a negative factor. While on the other hand, optimistic economic data from major global economies supported an upside in the markets.

On the domestic front, markets traded lower due to concerns over the rise in the whole inflation of the country. Additionally, concerns over further rise in inflation in future along with hike in railway fares led to negative sentiments in the markets. During the period, the Rupee depreciated around 0.6 per cent owing to robust month end dollar demand from importers, mainly oil. Also, buying of dollars by the RBI exerted downside pressure on the currency. However, sharp downside in the Rupee was cushioned as a result of inflow of foreign funds in equities and debt markets.

In the non-agri commodities space, the yellow metal has gained grounds once again in the recent weeks and rose nearly six per cent this month. The rise was partly due to rising violence in Iraq and lingering tensions over Ukraine lifting bullions safe haven appeal. 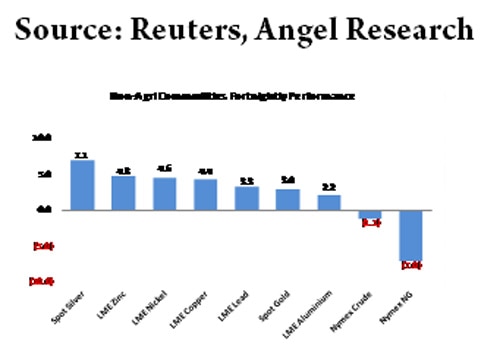 In addition, comments from the US that it could launch air strikes to support the Iraqi government after a rampage by Sunni Islamist insurgents led to the rally. Government forces continued to battle Sunni militants for control of Iraq's biggest refinery as US President Barack Obama said he will send up to 300 military advisers to Iraq to combat the extremist insurgency.

On the flip side, the central bank slashed its forecast for US economic growth to a range of between 2.1 per cent and 2.3 per cent from an earlier forecast of around 2.9 per cent. The Fed also reduced its monthly asset purchases from $45 billion to $35 billion. Although high reading for US inflation has raised expectations, the Fed might signal a sooner-than-expected rise in interest rates. Tightening rates would also lift the dollar and put pressure on dollar-priced commodities like gold. However, lack of interest by the Fed members to raise the interest rates and slow momentum in the US economy has acted as a trigger for traders to push the precious metals higher.

Spot silver prices also traded higher and gained by 7 per cent last fortnight in line with strength in the bullion prices. Optimism in Chinese and US economy largely lifted the base metals complex higher which appealed silver as an asset class by traders. This renewed interest and weakness in the dollar index further pushed the metal higher. On the MCX, silver prices rose tracking strong cues from international markets and traded largely on a positive note gaining more than 6 per cent.

During the last fortnight, LME Copper prices traded higher by 4.4 per cent on the back of signs of economic recovery in the US and China. Also, China's central bank extended a reserve-requirement cut to some national lenders in an effort to shore up an economy set for the weakest growth since 1990 supported gains. However, ongoing probe into warehousing deals in China continues to threaten demand outlook for the red metal. Further, mixed economic data from the US and Euro Zone exerted downside pressure on prices. MCX copper prices rose by 4.2 per cent in last 15 days in line with international markets and closed at Rs 417.85/kg.

Nymex Crude oil prices traded lower by 1 per cent in the last fortnight on account of easing of fears over exports disruptions from Iraq and assurances from UN Iraq Special Envoy Nickolay Mladenov that Iraq's southern oilfields, which produce most of the nation's 3.3 million barrels per day, remained unaffected, cooled oil prices on both sides of the Atlantic in the last fortnight and WTI crude prices declined by around 1 percent and closed at $105.74.bbl. Iraq ships 90 per cent of its crude exports from southern terminals, which are far from the Sunni insurgency. The country's oil exports in June were near record rates at around 2.53 million barrels per day.  The conflict in Iraq has added about a $3 per barrel risk premium into the Brent and US crude oil market.

In the coming fortnight, we expect precious metals to trade higher continuing its recent bull run as uncertainty over Iraq and slowdown in the US GDP will act as booster for prices to head higher. For crude, unless and until, militants take control over southern Iraq where major oilfields and infrastructures are located we do not see any disturbance in global oil supplies. However, if the issue escalates we see WTI oil prices heading higher towards $110. Base metals are likely to trade on a positive note as manufacturing data from the US and China is expected to come on a positive note. However, probe into Chinese warehousing deals will restrict sharp gains.
In the Indian markets, rupee depreciation will support gains in prices. 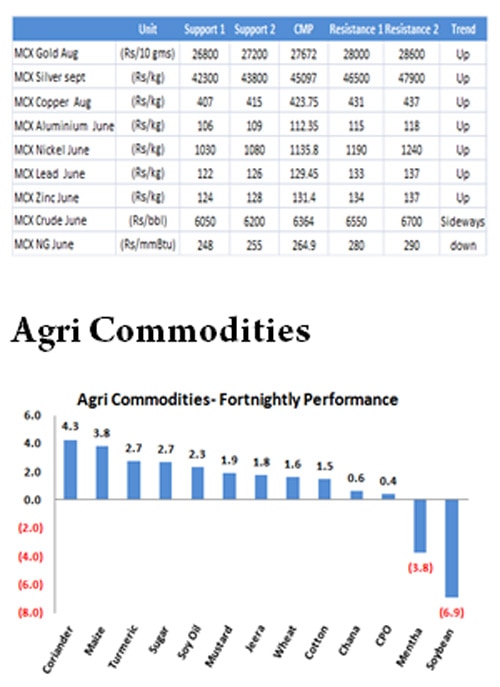 The agri commodities basket witnessed a bounce back from lower levels over the last fortnight as delay in rainfall has raised concerns over the output this year. Also, a lag in sowing also led to an upside in the prices.

According to the Ministry of Agriculture, sowing of kharif crops was 34.6 per cent lower at 13.15 mn ha as against 20.1 mn ha during the same period last year. According to the IMD the cumulative rainfall for the season till June 28 was 42 per cent below normal at 85.8 mm against a normal of 147.91 mm. On the regulatory front, the Forwards Market Commission disallowed fresh positions to curb the rising food prices. Also, the regulator has increased the cash margins on long and short sides to 100 per cent from July 9.

Among edible oil refined soy oil and CPO which remained under pressure initially due to comfortable stocks, recovered from lower levels on improving demand ahead of Ramadan and settled 2.3 per cent and 0.4 per cent higher, respectively. In the oilseeds, mustard seed gained 1.9 per cent on the back of good demand for mustard meal exports. However, weak soyabean capped the upside. Soyabean was the biggest loser and remained largely under downside pressure due to weak demand for soy meal exports and settled 6.9 per cent lower.

Among spices, coriander was the largest gainer posting 4.3 per cent returns on lower output coupled with declining arrivals and overseas demand. Turmeric also bounced back from lower levels on fears of below normal rains and a decline in the acreage, gaining 2.7 per cent. Weak demand due poor quality arrivals however capped sharp upside in the prices. Jeera recovered from lower levels on improved demand from the domestic and overseas markets. However, comfortable supplies capped sharp gains and settled 1.8 per cent higher.

Sugar gained as the government announced a host of incentives for the ailing sugar industry, including an increase in duty on  imports from 15 per cent to 40 per cent coupled with extending the export subsidy till September and extension of repayment of interest free loans on excise duty. Forecast of below normal rains also added to the upside However, comfortable supplies capped sharp gains and settled 2.7 per cent higher. Cotton futures recovered from lower levels on lower acreage coupled with below normal rains. However, weak global demand and an upward revision of India's output by the Cotton Association of India capped sharp gains and settled 1.5 per cent higher.

Chana futures also remained under downside pressure in the first half of the fortnight on weak demand coupled with arrival pressure. However, prices recovered from lower levels in the latter half on value buying coupled with weak monsoon which may lead to lower kharif pulses output and settled 0.4 per cent higher.

We expect most of the kharif commodities like cotton, turmeric and soybean to continue to move on the upside on fears of a weak monsoon and lower area covered till date. Chana may gains on fears of lower acreage of kharif pulses. Rabi commodities like mustard seed and coriander are expected to continue to remain firm on declining arrivals. Demand from the overseas markets may tend to support Jeera prices.

Edible oils like refined soy oil and CPO may gain tracking positive overseas markets coupled with demand ahead of Ramadan. Turmeric may also remain weak on sluggish demand on the back of poor quality arrivals. Soybean may remain mixed. Weak demand for soymeal may keep prices under check. However, a weak monsoon and a delay in sowing may support prices at lower levels.

Prices are also likely to take cues from the progress of monsoon as well as kharif sowing in the coming days along with movement in the Rupee. Any recovery in the monsoon may cap the upside and pressurize prices at higher levels. Prices may also take cues from any changes on the regulatory front.

Recommendations for a healthy start-up ecosystem in India