The fresh mandate will allow Modi to further relax investment rules, which means India's private sector giants such as Reliance, Tata and Mahindra would be prepared to invest billions of dollars in the defence sector. 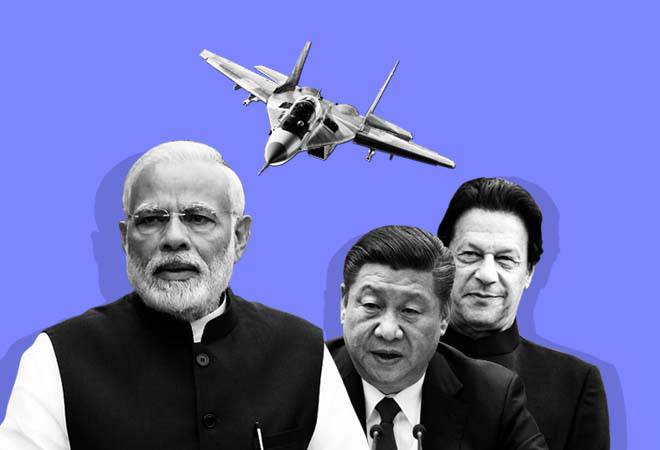 Prime Minister Narendra Modi's re-election provides the political leadership with the mandate to take India to its destiny as a great military power.

Prime Minister Narendra Modi's re-election provides the political leadership with the mandate to take India to its destiny as a great military power. Here are four ways in which Modi is ramping up the role of the armed forces and how his calibrated responses are neutralising India's adversaries.

"A nation that makes a great distinction between its scholars and its warriors will have its thinking done by cowards and its fighting done by fools," wrote the Greek historian Thucydides. Right off the bat at Independence, India's political leadership excluded the military while drafting policy, leaving the job to amateurs, carpetbaggers and cowards. The result was that India's strategic aims were stunted and the armed forces were never deployed to their maximum potential.

Until Modi arrived on the scene, India was stuck in the South Asia Syndrome. For decades the world had hyphenated India (one of the world's greatest civilisations and a $4 trillion economy) with Pakistan (an apology of a country with a measly $300 billion GDP). It was a ridiculous geopolitical standoff where India was constantly offering tepid responses to the provocations of its much smaller adversary.

Modi is the first Prime Minister who allows the professionals in the armed forces to do what is required to win wars. For the first time since Independence, India has started responding to Pakistani terror attacks with devastating counter strikes. The classic example of Modi's policy of disproportionate retaliation was Balakot where 12 warplanes struck at a terror camp across the international border, catching the Pakistan Air Force completely off guard.

The strike not only exposed Pakistan's inability to stop India from striking at will but more importantly, it shattered the myth of Pakistan's low nuclear threshold. Modi's aggressive response has greatly diminished Pakistan as a military power.

At the same time, Team Modi has been working under the radar, tightening India's chokehold on the fragile Pakistani economy. Demonetisation gave a death blow to Pakistan's fake currency racket, which was bankrolling its massive terror export industry, forcing the Pakistanis to dip into their nest egg to keep that industry going.

India's withdrawal of most favoured nation status and closure of the border trade has contributed hugely to inflation in Pakistan. Thanks to Modi, the Pakistani economy - once touted as Asia's most promising by Bloomberg - is now described by the same organisation as Asia's gloomiest in 2019.

Clearly, Modi is bad news for Pakistan. In his second term expect the Prime Minister to dial up the pain. India's diplomatic machinery is working overtime to make it difficult for Pakistan to get funds and loans from global agencies, further raising the cost of running an economy. The Balakot raid exposed a stark fact about Pakistan - it lacks enough jet fuel for both civilian and military aircraft.

That was the reason why its airspace was closed to civilian airlines for weeks. The IAF's aggressive patrols along the border rattled the Pakistanis, forcing them to forgo the lucrative civil aviation fees just to keep their air force planes flying.

The sharp uptick in separatist activity in Balochistan may be attributed to increased overseas funding and armed support for Baloch freedom fighters. No prizes for guessing where that is coming from. Pakhtun and Sindhi separatists are no doubt looking at Modi with renewed hope, but he will play a wait-and-watch game to see if Pakistan accepts that the two can play the game and decides to disarm its terrorists.

Calibrated Indian pressure could lead to the mental disintegration of the clueless Pakistani leadership. Prime Minister Imran Khan, a former cricketer, would know how that ends.

With the Pakistani albatross removed from its neck, India can pursue its great power destiny.

Putting China in the box

Chinese intrusions into Indian territory were once so common that often they didn't merit more than a single-column mention in Indian newspapers. Today, Indian Navy warships entering the South China Sea - which China claims as its private lake - are equally common. Not a month passes by without an Indian flotilla sailing into the highly contested waters either by itself or as part of joint exercises with the navies of Japan, the US, Vietnam, Singapore or the Philippines.

Chinese claims on the South China Sea have led to most of the littoral countries looking up to India for support, which ties in perfectly with India's Look East policy. China is now learning the hard way that messing with India comes with a price. The sight of Indian Navy ships sailing up and down the highly militarised waters is a huge blow to the pride of the People's Liberation Army Navy.

Modi is also expected to clear funds for a 250-ship navy that can challenge the massive PLA Navy in its own backyard. Plus, Indian Navy warships are starting to conduct patrols in the Pacific Ocean. This will force the Chinese to station some of their warships in their home bases rather than in waters close to India.

In Doklam, Modi gave the Indian Army a free hand to deal with the Chinese intrusion. So expect peace talks to be in cold storage until the dragon decides to stop breathing fire. Henceforth, it'll be the army that decides how best to deal with the PLA's aggressions. The latest order for 500 advanced T-90 tanks could well end up on the Himalayan borders.

The Chinese will soon discover that compared with talking to peacenik politicians in Delhi, dealing with India's resurgent armed forces is a different matter.

Closer military ties with the West

Since the days of the Jan Sangh, the BJP has pushed for closer ties to the West, especially the US. So it comes as no surprise that under Modi the country has entered into partnerships with a number of Western nations and their allies such as Japan and the ASEAN.

While many old-timers and nostalgia fans pine for the days of Indo-Soviet friendship, those days are gone. Russia is not the Soviet Union and its interests are not fully aligned with those of India. Plus, Moscow is now firmly in the Chinese camp and many of its decisions are in sync with keeping the dragon in good humour. Without breaking off with Russia - with which India still has defence ties - Modi is likely to pull away further to the West.

Closer military ties with the West will create mutual trust which was lacking during the Cold War because of India's tilt towards the Soviet Union. Joining the Western ecosystem will lead to a bunch of benefits, especially access to high technology. Plus, India's armed forces will gain from training with modern military forces such as NATO.

Self-reliance in defence technology and production is a pre-requisite for any nation that aspires to become a great power. As the Prime Minister said to representatives of defence MNCs at Aero India 2019, "We have a reputation as the largest importer of defence equipment in the world. That may be music to the ears of some of you here. But this is one area where we would not like to be No. 1."

For the first time since Independence, India is uniquely positioned to create a vibrant defence manufacturing sector because of 'Make in India'. The fresh mandate will allow Modi to further relax investment rules, which means India's private sector giants such as Reliance, Tata and Mahindra would be prepared to invest billions of dollars in the defence sector.

What's different about the current indigenisation push is the sweeping nature of the 'Make in India' initiative. According to the US-based procurement website Defense Industry Daily, the current government's policies have achieved what 60 previous years couldn't but more needs to be done.

"Ultimately, the real question in India is the extent of true domestic competition for defence funding. The circumstances seem favourable: this government is more committed to competition, has a more instinctive understanding of the for-profit industry, and harbours greater awareness of the severe capacity constraints of the traditional public sector undertakings."

The desire for more indigenous development and production will continue in an avowedly nationalist government, DID concludes. "Nevertheless, global defence firms may be able to develop deeper and more fruitful partnerships with emerging private sector defence firms in India, perhaps even leading to greater exports of Indian content - much praised, but rarely experienced to date."

Modi's re-election means the current process of reforms and incubation of the Indian private sector companies in the defence sector will get a huge launch momentum. This could continue for several years so that the domestic defence industry becomes self-sustaining.

Also Read: Move on, Masood: Why China threw its favourite terrorist under the bus

The best parallel is the success of India's IT sector, which started getting noticed as a global player in the early 1990s as soon as P.V. Narasimha Rao's economic reforms kicked in. Today, it requires no handholding by the Centre and is one of India's largest employers.

The defence industry could achieve greater success because of the very nature of the industry - every rifle, tank, missile, ship and aircraft produced involves thousands of subcomponents which will create hundreds of thousands of jobs downstream. And that's not counting the civilian spinoffs - military products that may have civilian use.

(The author is a New Zealand-based defence and foreign affairs analyst.)

Lok Sabha election result: Now that they have got the votes, they should give these tax benefits!

Sensex hovering around 40,000 mark is danger zone for investors