Rebooting Economy 65: IBC has failed; will a bad bank succeed?

At 21% recovery, IBC has performed worse than UPA-era debt recovery mechanisms panned for inefficiencies. The idea of a bad bank is also likely to fail if political interference and poor bank governance continue 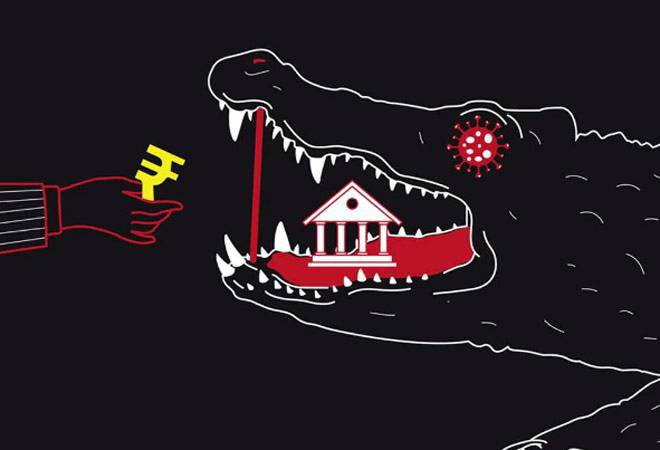 Faced with the prospect of dramatic rise in stressed assets of public sector banks (PSBs), about which the RBI warned in its recent report, the government is setting up yet another resolution mechanism. It proposes a bad bank under the ARC (Asset Reconstruction Company) and AMC (Asset Management Company) model in which ARC will aggregate all stressed assets and transfer them to AMC for resolution.

Post-2014, the government has tried three debt resolution mechanisms: (i) Strategic Debt Restructuring (SDR) scheme of 2015 which allows creditors to take over firms unable to pay and sell them to new owners (ii) Sustainable Structuring of Stressed Assets (S4A) of 2016 which lets creditors take 50% haircut to restore the financial viability of firms and (iii) Insolvency and Bankruptcy Code (IBC) of 2016 which either revives (resolution) or closes (liquidation) indebted firms.

The first two had failed by FY17, primarily because of governance failures as the Economic Survey of 2016-17 explained at some length. It was silent on the IBC since those were early days and strongly recommended a centralised (public sector) bad bank, which it called "Public Sector Asset Rehabilitation Agency" or "PARA" to "take charge of the largest, most difficult cases, and make politically tough decisions to reduce debt".

The government is now headed in this direction but to understand why one needs to look at the performance of IBC.

The IBC has been stopped from initiating fresh corporate insolvency resolution process (CIRP) until March 24, 2021, by the government and apex court orders prompted by the pandemic-induced economic disruptions. The IBC regulator, Insolvency and Bankruptcy Board of India (IBBI), provides details of stressed asset resolution until September 2020 (Q2 of FY21).

The IBBI's data shows that the total number of CIRP cases admitted for the IBC proceedings stood at 4,008 (from FY17 to Q2 of FY21). Most of these cases are from manufacturing (41%), real estate, renting, and business activities (20%).

Of these 4,008 cases, 277 ended in resolution (firms continue as going concerns) and 1,025 in orders for liquidation.

The following graph maps "admitted" claims of financial creditors (FCs) and "realisable" amounts from the resolution and liquidation processes. 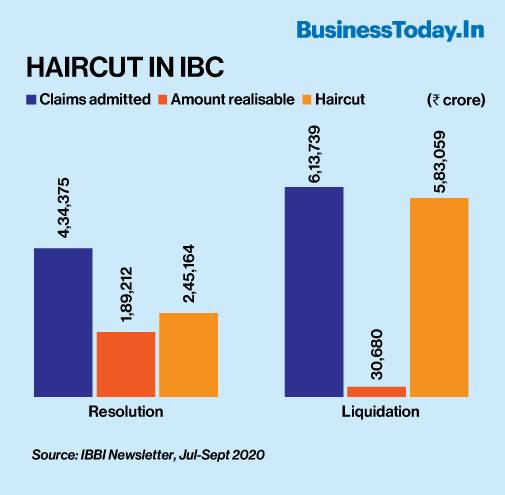 This debt recovery rate is far lower than the much-reviled UPA-era debt resolution processes when the recovery was 25% (and haircut 75%). The IBBI repeatedly reminded this in its reports to justify the IBC.

There is yet another downside to it.

Most of the debt claims ended in liquidation - Rs 6.8 lakh crore or 59% of the total claims.

Liquidation is, thus, a triple whammy for the economy: Loss of credit/loan, loss of business and loss of jobs too.

Why the IBC turned out to be worse than the notorious UPA-era of restructuring and ever-greening bad loans is for detailed investigation by forensic and insolvency experts.

But enough evidence exists to suggest that the IBC is likely to go further downhill from here. There are three major reasons for this: (i) UPA-era like two-year loan restructuring the RBI allowed in August 2020 due to pandemic disruptions (ii) the Supreme Court's September 2020 interim order to banks not to classify loans as NPAs until further orders and (iii) dilution of the IBC and RBI's regulatory powers.

All three facts are known and need no elaboration, except for recalling some details about the third which highlights one of the key factors that may cause a bad bank to fail.

After resigning as the RBI Governor in December 2018, Urjit Patel disclosed in his book "Overdraft: Saving the Indian Saver" that the government had diluted the IBC and weakened the RBI's regulatory powers to resolve stressed assets after it issued a "revised framework" on February 12, 2018, asking banks to start resolution process after a day's default.

The apex court struck it down on April 2, 2019, saying that "the RBI can only direct banking institutions to move under the Insolvency Code if two conditions precedents are specified, namely, (i) that there is a central government authorisation to do so, and (ii) that it should be in respect of specific defaults".

Instead of the RBI getting the authorisation, it issued a fresh circular diluting its earlier framework. Patel suggested that pressure from the government had led to this and that important functionaries of the government had started publicly undermining the IBC by seeking resolution of stressed assets outside the IBC. What Patel hasn't explained is: Why did the RBI acquiesce without protest? He hasn't yet revealed why he himself allowed demonetisation in 2016 that caused incalculable harm to the people and economy, especially since his predecessor Raghuram Rajan had opposed it.

Bad banks: Success is not guaranteed

Why will a bad bank succeed in resolving stressed assets when so many such mechanisms have failed?

The structure and functioning of the proposed bad bank is not yet known. After the announcement in the budget, Financial Services Secretary Debashish Panda has revealed that it would be a joint venture between the public and private sector banks without equity contribution from the government but with a sovereign guarantee to meet regulatory requirements.

The idea of a bad bank is not new to India though.

Former RBI Governor Raghuram Rajan and his deputy Viral Acharya wrote in their September 2020 paper "Indian Banks: A Time to Reform?" that India's "primary experience" with bad bank was when the IDBI Bank transferred bad loans worth over Rs 9,000 crore in 2004 to a wholly-owned special purpose vehicle but neither did IDBI recover substantial amounts via its bad bank nor did IDBI Bank's lending record improve.

There are currently 28 ARCs in the private sector, RBI data shows. The central bank had promoted private ARCs much before the SDR and S4A came (ARCs are registered under the Securitisation and Reconstruction of Financial Assets and Enforcement of Securities Interest Act of 2002). The Economic Survey of 2016-17 said the RBI had hoped ARCs would buy bad loans of commercial banks but that didn't happen. In FY15 and FY16, ARCs bought up just 5% of the total NPAs and found it "difficult to recover much from the debtors".

It said, following this the RBI focused more on the SDR and S4A but these two had failed by FY17. Now the IBC has failed too.

Why will bad bank succeed?

Political interference poses the biggest challenge to resolving banking stressed assets. The IBC experience has highlighted it once more. What makes such interference easy is the RBI's easy acquiescence, like in the demonetisation of 2016 and dilution of its 2018 directive to banks for starting the resolution process after a day's default.

Problems with public sector banks (PSBs) are very old and well-known. From the appointment of executive heads and their boards to loan disbursals, decisions are directed and influenced by the government of the day.

Lack of independent and professional management leads to many governance failures, like poor risk management, reporting of bad loans, evaluation and monitoring of projects and firms bankrolled, etc. Proposals for an independent body for bank appointments and empowering boards have been long ignored.

The other is the economic policies that the RBI flagged in its Financial Stability Report of January 2021. It said the fiscal and monetary measures taken to revive the economy had "unintended consequences" of creating "macro-financial risks" to the economy. The Gross NPA ratio of Scheduled Commercial Banks (SCBs) was likely to rise from 7.5% in September 2020 to 13.5-14.8% in September 2021 - which would mean Rs 15-16.5 lakh crore of stressed assets in the SCBs.

It warned that if the current fiscal and monetary policies were prolonged, authorities would be locked in forbearance and liquidity traps, which the budget has ignored as it opted for a small increase in fiscal spending while giving large dollops of liquidity and tax concessions to businesses. Another policy that remains un-flagged yet is the routine write-off of loan defaults by big corporate entities and repeated recapitalisation of PSBs in compensation that further incentivises loan defaults. (For more read "Rebooting Economy 60: India in a financial mess of its own making")

The Economic Survey of 2016-17 highlighted some of the big challenges in preventing or resolving stressed assets, other than economic and business stress. It said stressed debts were "heavily concentrated in large companies" making it "inherently difficult to resolve". Taking over such large companies was difficult since they had many creditors, and it was "politically difficult as well".

Rajan and Acharya wrote in their paper that status quo in banking was simply not an option, yet they also warned: "At the same time, poorly structured reforms may not help. For instance, rapid re-privatisation of a public sector bank without firming up an independent governance structure for the privatised bank may exacerbate problems rather than solve them."

Banking needs comprehensive structural changes to address stressed assets. As the past and contemporary experiences show, a trial-and-error method isn't necessarily the right way. For any mechanism to succeed, it would require two pre-conditions to be fulfilled: (a) addressing the conditions that lead to the creation of an unsustainable level of stressed assets and then (b) preparing the ground to pave the way for successful resolutions.

Short-cuts and impulsive actions haven't worked, have they?

Banking on technology: 5 tech trends every bank should be prepared for in 2021

Crisis brings opportunity: The many lessons from COVID-19