Base and precious metals to trade lower, commodities remain cautious

On a fortnightly basis, global equity markets traded marginally positive owing to a number of mixed factors. One of them is the US Fed's adoption of a wait-and-watch approach on raising interest rates this year, which gave a boost to the Wall Street.

On the Eurozone front, the Greek officials submitted a proposal in the emergency meeting that included concessions on pensions which was later rejected by its creditors as their discussions faltered. Despite a cooling economy, Bank of Japan wants to stabilise its currency by intervening daily to keep it stable which kept the Japanese market active. Hawkish statement made by the Bank of England policy maker Martin Weale, who hinted towards a rate hike as early as August, was cheered by the traders. Chinese shares sank as investors worry over the potential impact of a flurry of IPO's and moves by regulators to curb margin trading.

The Indian rupee appreciated by 0.99 per cent in the last fortnight as slump in the global commodity prices helped improve the trade deficit data of India that validated positive outlook for its current account balance. Moreover, the domestic equity markets were firm owing to surge in foreign inflows after the RBI's latest proposal with respect to debt markets along with government's plan to inject about $3 billion into state-owned banks this year to help them meet Basel III rules acted as a positive factor for the currency. US Fed's adoption of wait and watch approach to raise interest rates this year weakened the DX in turn benefitting the rupee. Ongoing talks between key officials of Greece, the EU and IMF to discuss ways on reaching upon a deal that would unlock 7.2bn in bailout funds boosted the demand for greenback which exerted pressure on the Indian rupee.

In the past fortnight, spot gold prices traded lower by around 0.5 per cent to close at $1,174.58/oz while MCX gold prices declined by 1.38 per cent to close at Rs 26,524/10 gms. The Federal Reserve said the US economy is likely strong enough to support an interest rate increase by the end of 2015, causing the dollar to extend losses. The US economy, after contracting in the first quarter, is now on track to grow between 1.8 per cent and 2.0 per cent this year, according to the central bank's latest policy statement and new projections.

LME Copper prices continued its decline for fourth consecutive fortnight and declined by 2 per cent as rising concerns of Greece default following failure in meetings between Athens and its creditors eroded market sentiments and in turn demand for industrial metals.

Further, China's net imports of refined copper fell nearly 18 per cent month-on-month to 252,000 tonnes in May, thereby indicating the combined factors of weak demand in May and the development of China's domestic refined copper capacity. In addition, investors are wary about London Metal Exchange (LME) copper stocks pursuing their downtrend, falling to 309,275 tonnes - their lowest since early March and largely feel it is a function of stocks reshuffling instead of underlying demand. However, sharp losses were cushioned as US consumer spending recorded its largest increase in nearly six years in May, pointing towards accelerating economic growth in the second quarter.

MCX copper prices fell by 2.5 per cent in the last fifteen days in line with international trends. In the past fortnight, WTI and Brent crude oil prices lost its value by 0.55 and 1 per cent respectively to close at $59.63 and 63.26/bbl. MCX crude oil prices lost its value by 1.11 per cent to close at Rs.3815/bbl. pressured by lingering doubts about demand a day after the US government data suggested the recent strength in crude consumption may not hold. Concerns about Greece's debt problems and the potential effect on Europe's demand for petroleum also provided pressure. Also, there are worries of a possible glut emerging in U.S. gasoline and diesel supply after large builds in both last week added to concerns that millions of barrels of Nigerian crude were floating around the Atlantic Basin looking for buyers.

Optimism in the US economy and possible hike in the interest rate by Federal Reserve will exert downside pressure on the precious metals in the coming fortnight. Oil markets remain amply supplied on one hand while the withdrawal of crude inventories in the US for consecutive eight weeks in a row is a positive signal on the demand side.

We expect oil prices to trade in a narrow range with mix set of factors surrounding the commodity. We expect base metal prices to trade lower as Greece concerns continue to be the major cause of concern for the global markets with no breakthrough achieved in the last few meetings. Also, investors will keep a watch on crucial employment data release from the US. 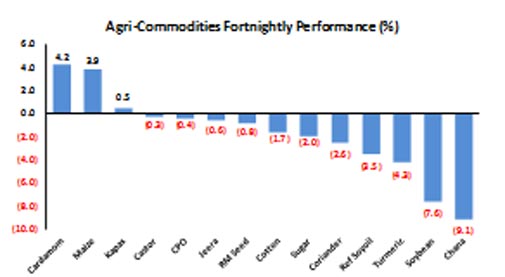 The south-west monsoon covered the entire country on 26th June, according to the India Meteorological Department, which otherwise normally covers the whole country by July 15. Since the onset of monsoon, the country has a whole received 145.7 mm rainfall, which is 24 per cent more than the normal (117.7 mm) till Jun 24. The Central India and South Peninsula got excess rainfall of 52 per cent and 32 per cent respectively. The East and Northeast India has witnessed a normal rainfall whereas northwest India has received 5 per cent below normal rainfall.

An above-normal rain this year has surged the planting area for oilseeds and pulses for Kharif sowing. According to the government data, sowing areas under pulses and oilseeds soared 80 per cent and about 430 per cent respectively compared to last year's sowing.

The chana prices in the spot market during June was down 9 per cent to Rs 4,370 per quintals from Rs 4,770 levels due to higher arrivals in the market as government has taken strict steps against the hoarders. Similarly, the most active chana July NCDEX contract also down more than 12.5 per cent in June while during last fortnight, it dropped 9 per cent to close at Rs 4,177 per quintal. According to the govt data, the country has imported about 419 thousand tonnes of chana in 2014-15, which is more than 51.8 per cent higher than the quantity imported in the entire previous year. Higher stocks of imported chana, good progress of monsoon and strict hoarding policies may keep the chana prices sideways in coming fortnight. However, the forecast of weak monsoon during July and August may push up prices.

During the last fortnight, oilseed complex closed in due to record sowing amid above normal rainfall in the country. Soybean continues its negative trend due to supply glut on account of less crushing. The active NCDEX Soybean August 15 contract was down 7.6 per cent and closed at Rs 3,482 per quintal.

Meanwhile, the soybean prices in CBOT has crossed $10 per bushels for the first time since March on sowing delay in the US due to heavy rains. There are predictions of planting and yield loss during 2015-16. The main Rabi oilseed, mustard seed prices have corrected almost 3 per cent from its low during the last fortnight and closed 0.8 per cent down at Rs 4,152 per quintal. The news on lifting a ban on Indian rapeseed meal by China and lower production estimates helped support prices above 4,000 levels.

Refine Soy oil and CPO traded both ways in last fortnight and closed lower on adequate stocks in the country against steady supplies. During last fortnight, soy oil prices have declined 4.3 per cent from its high and closed 3.5 per cent down at Rs 586.35 per 10 kg. According to SEA data, India imported about 2.89 lakh tons of soyoil this May against 1.87 lakh tons last year. However, the exports have surged more than 65 per cent to 13.5 lakh tons till May 2015 in 2014-15 oil year (Nov-Oct). The CPO prices during the last fortnight in BMD have been driven by Biodiesel policy, El Nio threat, soyoil surge in US and uncertainty over export demand from China and India. Reports on higher stockpile and forecast of lower exports may keep the prices in tight range.

We expect soybean and Ref soy oil to trade sideways due to higher sowing data for oilseeds and subdued demand for soybean for crushing on ample oil supplies from import and negligible meal exports. Mustard prices may continue its uptrend trend on lower stocks amid less production and demand for meal. However, CPO is expected to trade sideways to negative on reports on lower export predictions.

Among softs, cotton prices during last fortnight traded down and closed 1.7 per cent down at Rs 15, 840 mainly due to subdued demand from the ginners and millers on good sowing progress during this season and regular supplies from the CCI auctions. The acreage of cotton has surged about 20 per cent till Jun 26 compared to same time last year. Cotton is planted in 34.87 lakh hectare against 29 lakh hectare according to govt data. The international markets also remained under downside pressure on concerns over China's dip in exports for 2015/16 as China plans to release cotton from its state reserves for the local mills.

The sugar futures hit a six-year low during the fortnight and were down 2 per cent to close on Rs 2,147 per quintal on higher supplies from mills against steady demand from bulk consumers. This year's sugar production estimated to touch an all-time high of 28.3 million tonnes (mt) against the consumption of 22.5-23 mt in the ongoing marketing year 2014-15. Report on good sowing progress of sugar cane this year, sugar output is also estimated to remain high in the 2015-16 crushing season.

We expect cotton and sugar to trade sideways on good sowing progress coupled with comfortable supplies in domestic as well as international markets.

Spices complex traded mostly negative during the last fortnight except for cardamom which recorded good gains. Jeera prices have touched a low of Rs15,510 per quintal and surged more than 6.2 per cent to close at Rs 16,475 due to good demand from retailers and stockists on concern over production.

The quality issues further capped the upside as exports are limited. Turmeric prices have dropped about 4.3 per cent on lack of upcountry demand and reports of good sowing. Coriander prices have dropped 2.6 per cent due to speculative activities and closed at Rs 11,906 per quintal. Cardamom prices surged about 4.2 per cent to close at Rs 832 per kg last fortnight on concern over the production coupled with expectation of high export demand during the Ramadan.