Gold prices to head lower in the coming fortnight

Stronger dollar, optimism and growth about the US economy and probability of rate hike by the US Federal Reserve in its December meeting are push factors for gold prices. 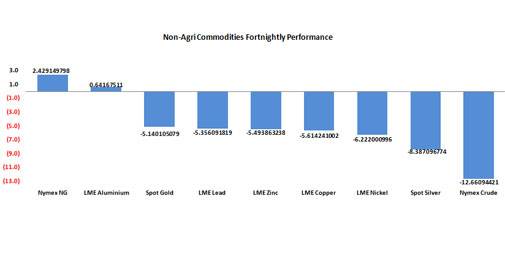 On a fortnightly basis, the global equity markets remained mixed owing to number of global developments that prompted the traders to place safe bets. From the US front, the speech of US Federal Reserve Chairwoman had a hawkish tone. According to the minutes, US policymaker commented on the possibility of raising short-term interest rates in mid-December provided the economy remains on track. She also spoke about the growth of the US economy which was pretty strong and was growing at a solid pace despite some weakness spilling over from the global economy. This development acted as a negative factor for the emerging markets.

The Indian Rupee depreciated by 0.76 percent in the last fortnight owing to the month end dollar demand from both importers and banks amid lower dollar price overseas. Increase in the midpoint rate of the Yuan currency by the Chinese regulators weakened the Indian Rupee. Moreover, surge in the greenback as expectation with respect to hike in short-term borrowing rates by the US Federal Reserve in December dented the demand for the domestic currency i.e. Rupee. This resulted in foreign outflows in emerging market economies including India.

In the past fortnight, spot gold prices traded lower by 4.42 percent to close at $1083.26 while MCX gold prices declined by 3.93 percent. Prices declined towards a seven week low and dollar hit a three-month high, in the past fortnight and looked vulnerable to further losses after Federal Reserve officials left the door open to a U.S. interest rate rise in December. Besides, Atlanta Fed President Dennis Lockhart said the U.S. central bank's last policy statement was deliberately trying to convince investors of a possible December hike and was successful in doing so. A strong U.S. nonfarm payrolls report last week bolstered expectations that the Fed would hike rates for the first time in nearly a decade at its next policy meet in December.

International silver prices declined by 7.47 percent while MCX silver prices declined by 6.5 percent in the past fortnight. Price decline is in tandem with falling gold prices. Strengthening dollar index by around 2.16 percent also acted as a negative factor for silver.
LME Copper prices plunged by 5.6 percent in the last fortnight as widespread concerns about weak demand in China, the world's largest consumer of raw materials continue to hurt metals demand as China's General Administration of Customs showed imports of copper and copper products for the first 10 months of 2015 fell 4.2%, to 3.82 million tons, from the year-earlier period. Moreover, Federal Reserve Chairwoman Janet Yellen indicated that interest rate hike remained a possibility this year. Further, supply tightening concerns after Glencore PLC, one of the world's largest commodities traders and producers, said it will be cutting its copper output more sharply than expected could not provide respite to the metal. Additionally, LME copper stocks fell by 1,625 tonnes to 266,225 tonnes, down by nearly 30 percent since late August to the least since February could not help either. MCX copper prices declined by 5.9 percent in the last fifteen days in line with international trends.

In the past fortnight, WTI oil prices declined by around 12 percent while MCX crude oil prices declined by 11.34 percent. Oil prices have fallen in seven of the last eight sessions, with losses accelerating after U.S. government data on Thursday affirmed a seventh weekly rise in U.S. crude inventories that took stockpiles near April's record highs. The International Energy Agency (IEA) said there was a record 3 billion barrels of crude and oil products in tanks worldwide. An estimated oversupply of 0.7 million to 2.5 million barrels per day has pushed crude prices down by almost two-thirds since June 2014.

Stronger dollar, optimism and growth about the US economy and probability of rate hike by the US Federal Reserve in its December meeting are push factors for gold prices to head lower in the coming fortnight.

Report from IEA that oil markets are well supplied by more than 1million barrels while OPEC report also suggests that they continue to pump extra crude and fill the oil market with ample supplies creating bearish sentiments, in turn lower oil prices. 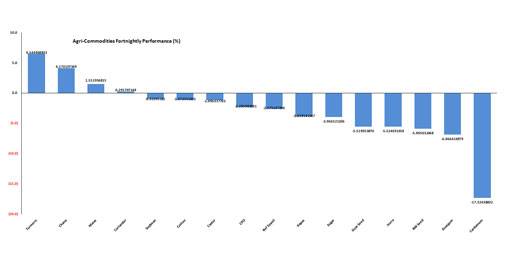 Below normal in late September and October has is taking toll on the rabi sowing progress in the country. Lower soil moisture in rainfed area of the country has affected wheat, paddy and oilseed sowing. As per the latest sowing data, rabi crops had been sown on 123.3 lakh hectares, less by almost 23 per cent compared to last year sowing in the same period. The area covered so far under Rabi is 65 Lakh hectares less than the normal sowing area till mid November..

Chana prices increased during last fortnight due to limited supplies and good demand from mills. The prices recover about 4.4 per cent from its low. The most active chana Dec NCDEX contract closed higher by 4.2 per cent to close at Rs 5,046 per quintal. According to latest sowing data released by Government, Chana had been planted on 24.4 lakh ha, almost 43 per cent more than the area covered during the same period last year. On the import front, country has imported about 2.75 lakh tonnes of chana in during first five months (Apr-Aug) in MY 2015-16.

During the last fortnight, soybean price traded on negative note as arrivals have improved in the market.  The active NCDEX Soybean Dec'15 closed down by 3.9 per cent at Rs 3,873 per quintal after touching Rs. 4,031 level.  Similarly, in CBOT, the soybean fall about 1.4 per cent during the fortnight to close at $8.590 per bushels due expectation of higher production and ample global supplies coupled with slump in export demand from US soybean. As per latest USDA report, Global soybean production is forecasted at 321.0 million tons, up 0.5 million, with the larger U.S. crop only partly offset by reductions for India, South Africa, and Uruguay.

The most active RMseed Dec'15 contract on NCDEX declined about 6 per cent to close at Rs. 4,637 per quintal during last fortnight due to disappointing SEA monthly export data for rape meal. As per the data release, India exported 3,079 tonnes of rapeseed meal in October, a fall of 94.88 percent m-o-m. India exported over 60,200 tonnes of rape meal in September.

During the last fortnight, Ref. Soy oil price for Dec'15 on NCDEX, decline by 3.7 per cent from its high, to close at 601.55 per 10 kgs. The prices have touched high of Rs. 624.6 levels but dropped due to profit booking and subdued demand at higher prices. Similarly, in CBOT, the soyoil prices for the most active Dec contract lose 3.57 per cent during the fortnight to close at 27.04 cents per pound.

The CPO prices during the last fortnight lose 2.3 per cent to close at Rs. 391.5 per 10 kg on steady demand and ample supplies in the domestic market. Similarly, Malaysian palm-oil futures also falls more than 4 per cent at 2,100 Ringgit / tonne due to weaker-than-expected export data coupled with on high inventory data. Malaysian Palm Oil Board showed near 15-year highs of palm inventories at end-October due to an unexpected rise in production. Export data from cargo surveyors also showed a 5 percent fall in the first 10 days of November compared with a month before.

Among softs, MCX Cotton Dec delivery contract traded mixed and close lower by 1.1 per cent during the last fortnight at Rs. 15,680 per bale. Similarly, NCDEX Kapas falls 5 per cent from its high to close at Rs. 839 per 20 kg. The drop in price is due to lower export demand and glut in domestic market as arrivals from new season crop picked up. Similarly, ICE cotton traded mixed as latest USDA data forecasts decrease in world cotton production and consumption for 2015/16.

The NCDEX Dec delivery Sugar slump 3.2 per cent to close at Rs 2,774 per quintal due to selling pressure as festival demand in domestic market ends coupled with start of new crushing season. Discontinue of export sops also weigh on prices. Department of Food and Public Distribution (DFPD) has been forced to discontinue export sops for raw sugar as the sops were being questioned by competing sugar producing countries such as Australia, Colombia and Brazil at the WTO. Export sops for raw sugar given in the past two sugar years (October to September). Internationally, ICE raw sugar Mar'16 increased by 4 per cent during last fortnight on expectation of deficit in world sugar economy due to erratic weather phenomenon in top sugar production countries. Moreover, rains in Brazil lower the sugar content of the cane, which may affect the world production.

During the last fortnight, spices complex traded on mixed note.  Cardamom slipped almost 17.3 per cent during the last fortnight due to selling pressure at higher levels as supplies have increased in the market. Similarly, Jeera too fall due to steady supplies and lower export demand. However, turmeric gain 6.5 per cent on revival of demand in the spot market as arrival of good quality increases as stocks of poor quality is dwindling. There are reports on lower sowing and concern over production also keeping the prices high as the new crop will only come during the next year. Coriander prices have stabilized during last week after falling almost 20 per cent in 15 days.

We expect chana prices to trade sideways during the next fortnight due to good supply of imported chana in the spot market as government relaxes limits for the importers. However, expensive imports may support prices at higher levels.

Soybean may trade on a negative bias during fortnight due to arrival pressure from the new season crop however; reports on concern over production may stabilize prices. Refine Soyoil may also trade sideways to negative on supply pressure.

We expect cotton prices to trade sideways to lower during next fortnight due to arrival pressure and lower export demand. However, reports crop damage and lower production may stabilize prices in long run.

Among spices, turmeric may trade higher on upcountry demand and good quality turmeric. While Jeera and cardamom may trade sideways to higher on expectation of good export demand in coming months. Coriander may higher due to slow sowing progress and concern over supply in domestic market.