Opinion: Modi govt should usher in an industrial revolution in India 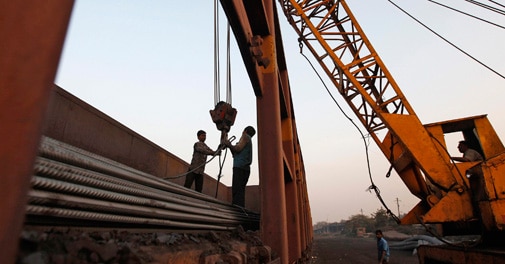 India's much celebrated growth during the past decade has been on the back of a booming services sector which contributes 59 per cent to our GDP. But is this growth truly inclusive and sustainable? No, it is not - with agriculture contributing only 14 per cent of GDP with a burden of 68 per cent of the population - this is just not sustainable.

India's manufacturing sector has existed at the extremes over the years - a few very large enterprises and a multitude of very small ones. There is a complete lack of mid-size firms, a phenomenon which was termed the 'missing middle' by the noted economist Anne Krueger. It is this middle layer that fuels the growth of an economy at the ground level - and it is this middle level that gets caught in the bureaucratic net - the small fish swim through and the big fish break through.

India's demographic profile too demands otherwise - with more than seven million working age population being added every year primarily from rural areas - we have a choice - demographic dividend or disaster. With the huge population in rural areas over dependent on agriculture, such excess/new workforce needs to be given jobs in the non-agricultural sector. The services sector will not be able to absorb such a huge number and nor do the skills set match - How many more youngsters can be made security guards! Growth of the manufacturing sector is the only answer which will result in employment-oriented growth.

Studies have also indicated that every job created in manufacturing can create two-three jobs in the services sector. Our future lies on how best we utilise our most powerful reserves - the human resource. That growth in manufacturing is an answer to our demographics seems to be an acceptable position both in the entire political spectrum (election manifestos) and also our bureaucracy (in conversations). However, there is unfortunately one very important exception - the tax department. Most policies of the tax department whether direct or indirect are unfortunately crafted in a manner which discourages manufacture and encourages imports. This is indeed ironical and short-sighted as growth in the manufacturing sector will have a huge multiplier effect, which in the medium to long term will boost revenue collections phenomenally.

The manufacturing sector suffers from a myriad of problems including stringent labour laws (not conducive to employment generation) and poor infrastructure such as power, roads, ports, land, supply chain, etc. These are problems that need to be solved but will take a long time and serious political resolve and large resources. For this, you need a positive investment climate and a facilitative tax regime.

Mr. Chidambaram [Former Finance Minister P. Chidambaram] recognised this well in his August 6, 2012, statement where he said that "uppermost in my mind is the duty to regain the confidence of all stakeholders" while talking about the challenged economy. He went on to add that "the key to restart the growth engine is to attract more investment both from domestic investors and foreign investors. Since investment is an act of faith, we must remove any apprehension or distrust in the minds of investors." He further went on to say that "clarity in tax laws, a stable tax regime, a non-adversarial tax administration --- will provide great assurance to investors."

The positive mood created by these statements and partially given effect to by recommendations of the [Parthasarathi] Shome Committee was short lived. The retrospective amendments were not withdrawn and no solution apparently found on those tax disputes continuing the uncertain environment - the tax department undertook further steps bordering on what is described in the BJP manifesto rightly as "tax terrorism" by making bizarre assessments - the most notorious one being Shell. Shell invested approximately Rs 870 crore foreign direct investment as equity capital in its 100 per cent subsidiary in India, which was converted by the magical transfer pricing wand into an approximate Rs 15,220 crore taxable income (as per information available in the public domain). Truly amazing! The attack on Nokia did not help matters at all and only worsened the investment climate.

These actions have not only depreciated the esteem of the country but have depreciated its wealth, too.

And what would we call our manufacturing regime? Extremely difficult with myriad problems as described above. To add to these existing problems is the treatment of the tax department to manufacturing in India when one compares it to imports. While a lot has been done on the cascading effects of indirect tax by allowing set-offs, direct taxes continue to create serious issues when it comes to implementing the Source Rule of taxation particularly in the manufacturing sector. In the past, import of products attracted very high customs duties on import value, which included software, technical fees, etc. And there was no further income tax except on profits earned on distribution. Import of software, technology, technical services etc. did not attract customs duties but attracted withholding income tax of +/-10 per cent under the Source Rule.  Hence, this created a disincentive to import as against manufacture.

The world has changed.  Software / technology / brand value components form a much larger proportion of the price. Customs duties have come down very substantially - to even zero per cent on information technology items. On the other hand, withholding income tax has been increased from 10 per cent to 25 per cent. Suppliers of technology etc. are usually unable to recover the tax withheld and hence insist on grossing up of the tax in their fees, consequently increasing the burden to approximately 33 per cent.

High soft costs coupled with high withholding tax of 33 per cent (grossed up) on the one hand and lower customs duty rates on finished goods and a facilitative import regime on the other hand - is a clear case of "a killer cocktail source rule" against manufacture and in favour of imports. Most countries tax royalties etc. only if derived from a permanent establishment and not on source rule. This rule being outdated and hampering manufacturing it should be withdrawn.

Huge controversies have arisen on this matter - the Hutch-Vodafone issue, retrospective amendment and substantial litigation on withholding tax from foreign investors has been a major cause for ruining the investment climate. On the other hand, investors through Mauritius, Cyprus, Netherlands, and Singapore get exempted from capital gains tax under treaties. It is ironical that an FII investing on the stock exchange and earning capital gains if exiting after one year is exempted from tax in India while a long-term strategic FDI investor is subject to capital gains tax.

WHY BOTHER TO MANUFACTURE IN INDIA!

On the indirect tax front, particularly for electronic and IT goods sectors, import of components are subject to a higher rate of duty than the finished good. Such an inverted duty structure is a huge disincentive for expansion of manufacturing operations and many companies that have established manufacturing facilities are operating at only fraction of their capacities. With such anomalies in the tax regime, leading to myriad tax disputes and very weak infrastructure and labour laws, the slogan is why bother to manufacture in India!

The most ambitious effort to revive manufacturing was made in 2005, with the passing of the Special Economic Zones Act (SEZs). While the SEZ policy was brought out to boost domestic manufacturing in a hassle-free way, the tax benefits have been substantially whittled down. To encourage India to become a global manufacturing hub for various items, particularly automobile cars, a domestic sale component is necessary, but the high customs duty levied on such domestic sales is a big deterrent. This custom duty gets levied even on value added in India i.e. Indian labour, Indian material etc. and is at a rate higher than FTA rates on certain items. Customs duty should be levied on duty foregone basis on domestic sales from SEZs and no customs duty levied on valued added in India.

To encourage manufacture over import, the government must have an overriding guiding principle for direct and indirect tax legislation, policy, implementation and interpretation i.e. - every action should be evaluated on the touchstone on whether it would favour import or manufacturing. Our tax department needs to take this holistic approach and do away with its current practice of trying to extract tax out of any and every transaction by interpreting the law in a convoluted and bizarre manner. Manufacturing will definitely create more tax generating avenues for the tax man - so please don't kill the goose that is to lay the golden eggs.

We all hope Prime Minister Narendra Modi's government will usher in the industrial revolution and we can reap the demographic dividend and take India to its deserving heights in the comity of nations where poverty and hunger are minimised.

'Protection and investment are closely intertwined'