Why agent banking is a win-win In emerging markets and rural areas, traditional banks have a hard time reaching customers. Opening and operating traditional bank branches are often not cost-effective. Operating a bank branch entails having at least one teller at the front desk, a bank manager and bank employees specialising in areas such as mortgages and loans, and security. It is one of the reasons why banks are closing rural branches. Rural customers also have to travel extensively to visit their respective bank branches. For instance, an average rural customer of the State Bank of India has to travel around 8-20 km to the closest branch, according to statistics by Reserve Bank of India. 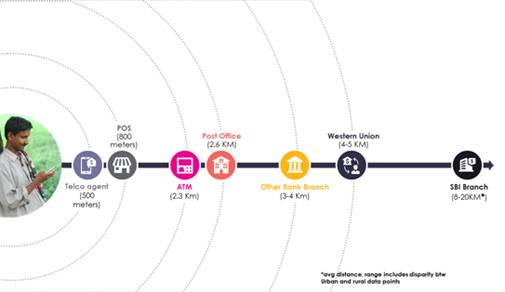 In such a scenario, agent banking, comprising a network of banking agents who act as physical bank branches, is the answer. Banking agents can be telcos, e-wallet providers, retailers and so on. It is extremely convenient as the travel distance to, say a telco agent, is less than 2 km for that same SBI bank customer.

It's a win-win-win for all

The banks will be able to expand their customer base by onboarding new customers who were previously out of their reach. By having banking agents, instead of more physical bank branches, infrastructure and manpower costs are reduced while revenues are increased.

The banking agents benefit since they generate additional income, including sales from additional walk-ins. They can also differentiate themselves from competitors as they are now affiliated with well-known banks.

Last but not least, the previously unbanked and underbanked customers have now easy access to a financial institution near them. Apart from reduced travel time and expenses, the transaction fees are also lower.

It's a global success

The agent banking model has proven to be successful in Latin America, Africa, India and the Far East. For example, the Kenyan Equity Bank was able to become profitable by reaching the mass market for deposits via its agent banking network. This success was enabled by the local government's strategy to increase the number of banked Kenyans from 30 per cent in 2013 to about 70 per cent by 2030. To enable this, the government amended the Finance Act 2009, as per Kenya Gazette Supplement, allowing banks to use banking agents to offer services on their behalf.

If we look at Latin America, we see that the leading countries that allow (and benefit from) agent banking are Colombia, Brazil, Peru and Mexico. In Brazil, the Banco Central do Brasil reported that since the introduction of agent banking, 12 million current accounts were opened at the banking agents and the total amount of transactions reached 2.6 billion within the first three years.

In the Democratic Republic of Congo, the Foundation for International Community Assistance (FINCA) has introduced agent banking to keep customers safe. As they had to travel long distances to their respective bank branches, they were at risk of being robbed. They were also losing time and productivity due to those long journeys. The agent banking network consists of local merchants and shopkeepers who provide basic banking services. Due to the success in that country, FINCA has also introduced agent banking in Tanzania and Zambia.

In January 2017 Bank Asia announced it would add 2,000 agent banking outlets to its existing 1,200 in Bangladesh. The bank originally launched its agent banking network in 2014 when the central bank allowed agent banking in the rural areas where banks had no branches.

Banking on the future

As we have seen above, agent banking is a win-win-win for all parties involved. The agents win as they can sell a greater variety of specialised products and services on behalf of the banks to customers in remote regions. The customers win by getting easy access to accredited financial services providers, and the banks win as they can increase their market share.

Agency banking will play an important role in the coming years for financial inclusion. Acting as "proxy banks", agents will provide individuals and small businesses with the financial services they need to stimulate local development and economic growth.

Decoding the science of retail shopper marketing: How brands sell themselves