Gold prices may trade lower in the coming fortnight

On a fortnightly basis, global equity markets traded on a positive note as a result of the dovish statement made by the US Federal Reserve Chair Janet Yellen, who commented on the need for stabilization of foreign economies and its markets.

Naveen Mathur
On a fortnightly basis, global equity markets traded on a positive note as a result of the dovish statement made by the US Federal Reserve Chair Janet Yellen, who commented on the need for stabilization of foreign economies and its markets. She also stated that further appreciation of the American currency would depress inflation and exports thereby hurting the manufacturing sector of the nation. Furthermore, the US policymaker was sceptical that the recent rise in core inflation will prove durable.

All of these factors acted as a positive factor for the merging market economies. Moreover, growth of loans to the private sector in the euro area picked up modestly on February 16. This infused optimism in the markets as borrowing is a main financing source for corporate investment, which in turn should boost the euro zone's currently weak economy.

The Indian Rupee appreciated marginally by 0.03 per cent in the last fortnight owing to persistent selling of the American currency by exporters and banks. Moreover, surge in capital inflows along with weakness in the US Dollar Index helped the Indian Rupee to stay supportive. Domestic markets i.e. Sensex and Nifty traded on a positive note after the US Federal Reserve commented about adopting a cautious approach in raising borrowing rates owing to slack seen in global growth rate. This acted as a positive factor for all emerging market economies including India.

Gold prices were pressured by a firmer dollar following hawkish comments from US Federal Reserve officials, that suggested at least two interest rate hikes this year, with the first potentially coming next month. The metal is highly exposed to rising rates, which lift the opportunity cost of holding non-yielding assets, while boosting the dollar. Gold fell 10 per cent last year ahead of the first US rate increase in nearly a decade in December. Comments from US Federal Reserve Chair Janet Yellen indicated the central bank's cautiousness in raising interest rates.

Last fortnight, LME Copper prices plunged 4.7 per cent on indications by some Fed officials that policymakers think they could raise interest rates as early as next month led to strength in the DX and hurt demand for the metal.

Also, China's campaign to slim down its bloated industries threatens to overwhelm local banks as it may be derailed by more than $1.5 trillion of debt in its steel, coal, cement and non-ferrous metal sectors. Moreover, recent data showed that net foreign exchange sales by the central bank and commercial banks dropped in February as the Yuan stabilizes. However, sharp losses were restricted as Chinese imports of refined copper jumped more than 50 per cent year-on-year to 328,604 tonnes in February. Further, LME copper stocks, at above 155,000 tonnes, have fallen more than 35 per cent since late January. MCX copper prices fell by 5.6 per cent in the last fifteen days.

In the past fortnight, WTI oil prices declined by 6.72 percent while MCX crude oil prices declined by 7 percent. Prices marked its best quarter since mid-2015 although some said the rally could fade soon as an output freeze plan by major crude exporters fails to alleviate worries of a glut. Markets are worried that a tentative agreement among the world's largest producers to keep oil output at January's levels will barely make a dent on global supplies. Growing concern that a two-month rally was fading as demand fails to keep up with swelling global supply, including new output from Kuwait and Saudi Arabia. Gold prices trajectory from hereon are a combination of interest rate hike in the US, investment demand stronger dollar and GDP growth from the US. We expect gold prices to trade lower in the coming fortnight.

Crude oil prices rally in the recent past could fade soon as global inventories remain exceedingly high while the OPEC and Non OPEC producers decision to produce lower oil output will be a close watch in the weeks ahead.

We expect base metal prices to trade lower as latest jobs numbers from the US indicate a strong momentum, thereby increasing the chances of arte hike as soon as April. Also, CFTC data indicates falling investor interest in the red metal. Further, investors will keenly watch Janet Yellen speech and Chinese GDP data.

During last fortnight, the prices of majority of agri-commodities have increase due to good demand for edible oil, pulses and fiber. The Rabi season crops like mustard seed, Chana, Jeera etc are now hitting the physical market and expected that arrivals will be peaking during current month. Normal monsoon with well-distributed rainfall over the country is predicted for this year, which may certainly improve water availability in the country. Moreover, above normal rainfall may cause flooding in some parts of country, which may damage standing crop.

During last fortnight, Chana futures improved due to increased physical demand for new season crop as government is quite active in procuring to create buffer stocks.. The most active NCDEX Chana for April delivery closed higher by 6.2 per cent to close at Rs. 4,604 per quintal. India has imported 5.79 lt of Chana until December in the current financial year. In December, country imported over 2 lt of chana which is a record.

Soybean prices have moved highest among agri-commodities during the last fortnight on lower supplies and good crushing demand. Soy meal demand increases the crushing of soybean. Moreover, improves global edible oil and meal prices too help soybean to gain. Soybean price for April delivery on NCDEX closed higher by 8.7 per cent to settle at Rs. 4,105 per quintal.  Similarly, CBOT Soybean ended higher during the last fortnight due to strengthening currency in top exporter Brazil and hopes for a pickup in demand for the US crop and weather concerns for new season sowing. 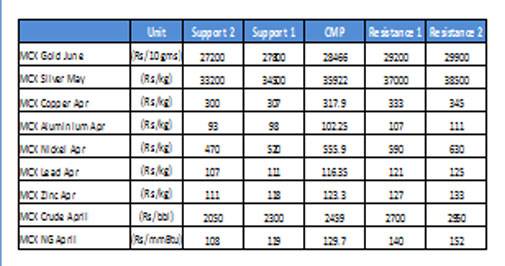 Mustard prices in futures market surged about 8 per cent over the last fortnight on fear of crop damage due to forecast of unseasonal rains over mustard growing regions. Moreover, lifting of stock limit for oil and oilseed in Rajasthan also supporting the price.

Ref. Soyoil prices too surge last fortnight tracking the international edible oil market. Ref. Soy oil on NCDEX for Apr'16 delivery, gained by more than 5.1 per cent to close at 657.3 per 10 kg. In CBOT, the soyoil prices for the most active May'16 contract jumped about 3 per cent during the fortnight to close at 34.67 cents per pound tracking overall firmness in oilseed market.

The Crude palm oil (CPO) too surged last fortnight taking clues from Malaysian CPO prices as India is top importing country. April delivery contract at MCX close 7.8 per cent higher at Rs. 552.9 per 10 kg. The prices have jumped as international prices also increased significantly on fear of drop in world production coupled with, increase in export tax in Malaysia and biodiesel policy in Indonesia.

Among softs, cotton and kapas prices have recovered during the last fortnight on fear of reduced supplies due to lower crop estimates and increase in textile mill demand.  Similarly, ICE cotton futures traded higher on reports of good exports and weather concerns during early part of sowing in the US. Uncertainties regarding the quality of Chinese cotton to be auction is also little bullish.

Sugar futures traded higher during last fortnight due on report lower production and good summer demand. May'16 delivery closed higher by 3.0 per cent to close at Rs 3,538 per quintal. However, ICE raw sugar May'16 declined by 4.95 per cent during last fortnight as the Brazilian real got stronger against the U.S. dollar, pressuring sugar, which encouraged producers to hold back their stocks due to lower profits.

Among spices, Cardamom and turmeric traded on negative note due to good arrivals and steady export data. Cardamom season is about to end and the last picking is going on in Kerala. Turmeric prices have been in pressure due to want of demand. Moreover, prices of Coriander and Jeera increase due to good demand for new season crop.

We expect Chana prices to trade sideways to higher on news of government procurement and good demand from stockists and traders. Moreover, expensive imports and reports of bad weather during arrival season may support for chana prices.

We expect cotton prices to trade sideways on muted demand in the domestic market.  Reports of higher carryover stocks too weigh on prices.

Among spices, we expect Jeera and coriander futures to trade higher due to reports of crop damage and expectation of revival of export demand.  Turmeric may trade sideways to lower as peak arrival season is approaching while Cardamom may trade lower on sufficient stock with the stockists. Practo partners with Twitter to address health queries in real-time