How Gold, crude and other commodities will perform in the fortnight ahead

On a fortnightly basis, global equity markets traded on a positive note after the Chinese regulators slashed the reserve requirement ratio by 50 basis points for all banks from March 1, 2016.

On a fortnightly basis, global equity markets traded on a positive note after the Chinese regulators slashed the reserve requirement ratio by 50 basis points for all banks from March 1, 2016. Moreover, the EU's statistical agency said that the number of people unemployed in the euro-zone fell by 105,000 to 16.65 million. Upbeat economic data release from the US along with possible easing in Euro-zone prompted the traders to place risky bets. However, the rising "Brexit" risks kept the markets a bit pressurized.

The Indian Rupee appreciated by more than 2 per cent in the last fortnight owing to sustained selling of the American currency by banks and exporters. Finance minister Arun Jaitley in the recent Budget proposal stated that more support would be provided to exporters to boost overseas shipments. This acted as a positive factor. He also commented that the investment limit for foreign entities in Indian stock exchanges would increase to 15 per cent from 5 per cent. RBI came out with new regulatory capital to meet the globally acceptable Basel-III norms. All the above factors acted as a positive factor for the Indian Rupee.

In the past fortnight, spot gold prices rose by 2.55 per cent to close at $1259.06 while MCX gold prices rose by 0.86 per cent to close at Rs 29766 per 10 gms. Weak economic data suggested that the US economy is slowing, thereby driving investor interest in safe haven metal. Chicago purchasing manufacturers' index witnessed a larger-than-expected drop falling to 47.6 from 55.6 a month ago and pending home sales plunged by 2.5 per cent in January.  Comments by New York Federal Reserve President William Dudley that he sees downside risks to his US economic outlook, signaling a delay in the Fed's next interest-rate hike. Minutes of the US Federal Reserve's latest meeting showed policymakers considered changing their planned path of interest rate hikes in 2016. Expectations that US rates will stay lower for longer have sharpened appetite for the metal.

Last fortnight, LME Copper prices jumped by 8.8 per cent as People's Bank of China cut the reserve requirement ratio, which stipulates how much cash banks must keep in reserve, by 0.5 per centage points to 17 per cent for large, commercial lenders. This will effectively allow the banking sector to increase lending by around USD100 bn. Also, Chairman of the China Securities Regulatory Commission Xiao Gang was replaced by central bank veteran Liu Shiyu on Saturday, adding to signs that the government was stepping up its economic stimulus efforts. Also, China's announcement that it will reduce deed and business taxes for home buyers, effective Monday, in many of the country's cities, in a bid to reduce the glut on the property market. Further, latest positioning data from the London Metal Exchange showed that the net long position of funds betting on a rise in copper prices doubled to 20,466 lots as of last Friday. However, sharp gains were capped as meeting of G20 finance chiefs ended with no new plan to spur global growth although they agreed to use all policy tools monetary, fiscal and structural to reach the group's economic goals. MCX copper prices surged by 7.4 per cent in the last fifteen days.

In the past fortnight, WTI oil prices rose by 21 per cent while MCX crude oil prices rose by 18 per cent. Reuters survey showed supply from the Organization of the Petroleum Exporting Countries has declined in February to 32.37 million barrels per day (bpd) from a revised 32.65 million bpd in January. Global market sentiments were positive after China, the world's largest oil importer, last Monday cut its reserve requirement ratio, the amount of cash banks must hold as reserves, for the fifth time in a year.  Saudi Arabia said it wanted stability in crude prices and is working with OPEC members Venezuela and Qatar and non-OPEC producer Russia on a plan to freeze oil output at January highs. Russia and Venezuela said last week they are planning a broad meeting of producers in mid-March.

Poor economic data from the US, gains in investment demand as seen in the increase in the gold holdings in the SPDR gold trust, weak growth in China are all factors for gold prices to rise higher in the near term.

Crude oil prices will trade higher as the prospects of cut in oil output by the OPEC nations, and cut in reserve ratio by China are strong factors for oil in the near term.

We expect base metal prices to trade lower as Li told in recent annual meeting that Chinese economy will face more and tougher problems and challenges in 2016 and the government must be prepared to fight a difficult battle. Also, investors will be cautious ahead of ECB Press Conference due on 11th March. 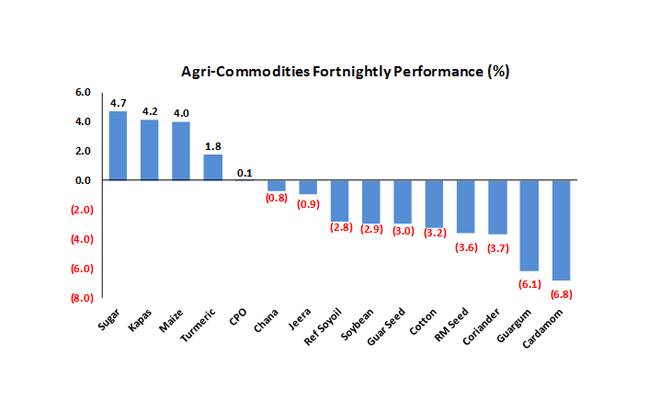 During the last fortnight, the prices of certain agri-commodites improved on forecast of rains and hailstorm in North and Central India. As per IMD, rain or thundershowers Prediction saw normal to excess showers for western Rajasthan, eastern Uttar Pradesh, Bihar, eastern Madhya Pradesh, Chhattisgarh, southern Gujarat and adjoining Mumbai. Thus, winter rainfall may extend up to which is bad news for farmers if it coincides with the harvesting of their crop.

Chana futures were under pressure during the last fortnight as newly harvested Chana crop starts hitting the market so as imported chana. The most active NCDEX Chana for April delivery closed lower by 0.08 % to close at Rs. 4,221 per quintal.  The Government agencies have procured 51,000 MT of kharif pulses and started to procure Masoor, Gram dal and other Rabi pulses. Stockists are also buying up to their respective stock limits for the new season crop. India has imported 5.79 lt of Chana until December in the current financial year. In December, country imported over 2 lt of chana which is a record.

During the last fortnight, Soybean futures slipped southwards on reports of sufficient supplies coupled with lower export demand for soy meal and higher import of vegetable oil. Soybean price for March delivery on NCDEX ease 2.9% to settle at Rs. 3,618 per quintal. Soybean crushing is reduced this year due to continuous disparity and high domestic price affecting availability of both oils and meals. Capacity utilization is at the lowest. The export of soybean meal is at a historical low of 70,390 tonnes during the first 11 months of 2015-16, compared to 613,676 tonnes in 2014-15 and 2,558,781 tonnes during the same period of 2013-14.  Similarly, CBOT Soybean ended lower during the last fortnight on reports of weak export data from the US and favorable weather forecasts for Brazil pressurized prices ahead in the soybean harvest.

The most active RMseed Apr'16 contract on NCDEX closed lower by 3.6 per cent to settle at Rs. 3,840 per quintal. The prices were down due to reports of higher production this year when the edible oil imports re on record high. India's mustard output is seen rising for the first time in three years at 6.84 mt as per second advance estimates by Dept of Agriculture. Last year, the production was 6.31 mt.  As per second advance estimate released by Commissionate of Rajasthan, mustard production is forecasted at 34.95 lt compared to 28.8 lt last year.

Ref. Soy oil price for Mar'16 delivery on NCDEX slips 2.8 per cent last fortnight to close at 609.75 per 10 kg. The prices have slipped due to profit booking, as the Government did not hike import duty. In CBOT, the soyoil prices for the most active May'16 contract loss by about 2.12 per cent during the fortnight to close at 30.96 cents per pound as soybean prices were under pressure.

The CPO prices on MCX for March delivery closed somewhat flat but recovered about 2 per cent from its lower level to close at Rs. 485.8 per 10 kg in last fortnight. This recovery is due to increase in international prices and weak rupees. According to latest data released by SEA, during November-January, import of refined oil (RBD palmolein) jumped to 23,50,063 tonnes from 22,93,994 tonnes compared to same period of previous oil year.

Among softs, cotton and kapas traded on mixed note flat during the last fortnight. Kapas jumped more than 4.2 per cent on good demand from the ginners on report of lower production. Demand for cottonseed oil cake too supports higher price. However, cotton bale prices were down as textile mills are buying cotton as per their requirement. ICE cotton futures settle lower by 4 per cent last fortnight due to reports of higher acreage predicted in the US. Moreover, weak export data sluggish demand in China, India and Brazil too pressurize prices.

Sugar futures traded higher during last fortnight due on report of good exports from the country as world sugar prices have increased on reports sugar deficit. However, much if the positive trend is arrested due to reports on higher production by mills in first three month of crushing. As per ISMA, domestic sugar production increased by 2 per cent for Oct-Feb. NCDEX Mar'16 delivery closed higher by 4.7 per cent to close at Rs 3,220 per quintal. Mills have already contracted to ship out 1.2 mt, out of the 4 mt of sugar government has mandated for the sugar millers. Similarly, ICE raw sugar Mar'16 jumped by 18.45 per cent during last fortnight on reports of tightening world supplies due to drought-hit crops in Thailand and India, and the prospect of increased use of Brazilian cane by the ethanol sector.

During the last fortnight, spices complex traded under pressure due to expectation of good arrivals from new season crops. However, Turmeric prices have gained due to good upcountry demand and reports of lower production. Jeera prices have been little lower due to lack of export orders while expectation of higher coriander dampen its prices.   Cardamom price were down due to cheap imports from Guatemala crops.

We expect chana prices to trade sideways to higher, on anticipation of demand from dall mills and news on crop damage in Maharashtra and Madhya Pradesh due to recent unseasonal rains and hailstorm. However, prices may stabilize due to stock limit and anti-hoarding measures on higher imports.

We expect Soybean prices to trade sideways on sufficient supplies in domestic market as traders and millers do need based buying. Higher edible oil imports and lower meal export too pressurizing prices. Meanwhile, CPO prices may also trade higher on reports of lower production and reducing stockpiles in Malaysia and Indonesia.

We expect cotton prices to trade sideways to higher on anticipation of limited arrivals from central and western India due to wet weather.  However, need based buying by domestic textile mills coupled with limited exports demand may weigh on prices.

Among spices, we expect Jeera futures to trade sideways to higher due to reports of crop damage in Saurashtra due to unseasonal rains.  Turmeric may trade higher on good demand for higher quality turmeric on lower supplies as farmers are holding their stocks. Cardamom may trade lower due to heavy supplies of imported cardamom from Guatemala.

(Naveen Mathur is Associate Director-Commodities and Currencies at Angel Broking)