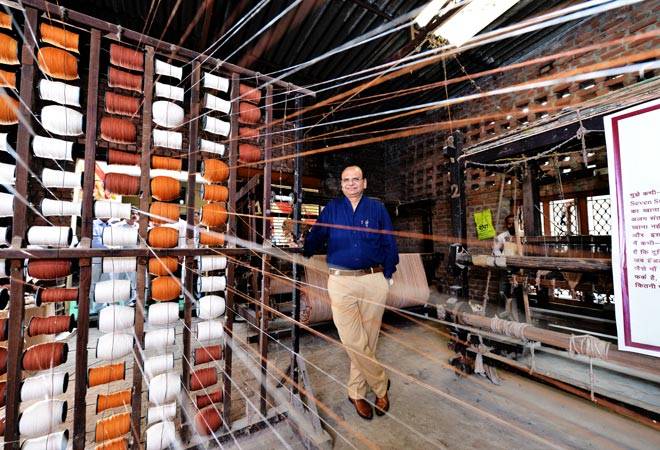 KVIC seems to be on an aggressive makeover and marketing drive… What is the reason for it?

Yes, a big thrust for this is coming from the Prime Minister, who is giving special emphasis for the revival of Khadi and village industries. In his address to the nation through, Mann ki Baat on 31 January 2016, Prime Minister Modi spoke about Khadi for about nine minutes, thus motivating lakhs of Khadi workers, artisans and the entire organization in one go. He also addressed 5.42 lakhs khadi workers and artisan on 30th January 2016 through the Modi App and wrote letters to them. In Feb 2016, Prime Minister's office placed an order to supply 377 khadi woolen coat, jersey and socks for its office staff. In April 2016 Prime Minister's office placed an order to supply 10,000 khadi handmade paper file covers. These gestures obviously hint at how committed the government is towards reviving the national heritage. Because of the appeal made by Prime Minister Narendra Modi and his efforts at promoting Khadi, sales have gone up by 34% in 2015-16.

What specific initiatives have been taken by the Commission?

Special attention has been paid to aggressively market Khadi and village industries products. Most of these are first time initiatives of broad national application. For the first time, an initiative to penetrate into several national service sectors like Airlines, Navy, Railways, Postal Department were made. These translated into orders from Air India, CBI, Department of Posts and Indian Railways. Most importantly, these orders were secured through competitive tendering and quality check, thus upholding the value for price nature of Khadi and village industries products. Also, we are reaching out to corporate entities, hence increasing the visibility and competitiveness of Khadi in the public domain. JK Cement group, a leading corporate house, also agreed to use Khadi dress material for uniforms in all their schools, colleges and factories. This has fetched an order of 6200 meters of dress material and 1000 safety shoes in April 2016. All these orders are resulting in the generation of man-days of additional work, which is so important for inclusive growth.

Indeed, brand makeover is an extension of the marketing strategy and an important part of building adaptability to Khadi products in lieu of the requirements of the modern times. Two internationally renowned and competent advisors have been appointed by the Commission. Ritu Beri, renowned fashion designer and Dr R Sudarshana, former strategist with the United Nations have joined the Commission and have been providing valuable advice. We are aggressively showcasing Khadi products at airports in order to bring high-end visibility to our products. In order to augment the strength and uniqueness of Khadi, a common signage -KHADI INDIA - has been adopted. All Khadi outlets across the country have begun showcasing this signage. Likewise, 'Khadi Mark', similar in concept to 'woolmark' is also being developed. A new line of products called Khadi denim for youth is being developed, in order to attract youth to Khadi. A campaign, highlighting the zero carbon footprint of Khadi has been launched. Water efficiency of Khadi production in relation to other non-organic fabric production is also being highlighted within the campaign, among other measures.

The idea is not to criticise the govt, says PAC Chairman K.V. Thomas