The river linking project is a recipe for disaster: Vandana Shiva

Environmentalist Vandana Shiva talks to Sarika Malhotra on the river linking project in the country. 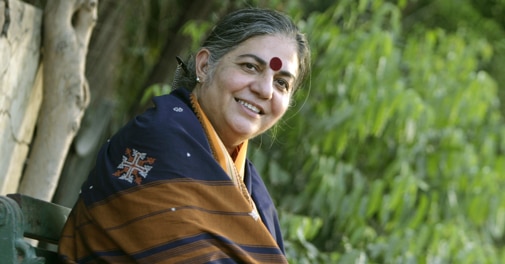 Environmentalist Vandana Shiva talks to Sarika Malhotra on the river linking project in the country.

Q. How do you view the river interlinking programme in India?

A. It has no hydrological or ecological soundness, and is just part of the corruption/construction package that has ruined India's ecosystems and life support base. This is (pushed by) the same lobby that aggravated the Uttarakhand disaster with its hydroelectric projects. The river linking project is a recipe for disaster. The project involves 200 large reservoirs, a network of canals, which will lead to mega displacement. The social and ecological impact of the project has not been done. This is a blind and mad rush to destruction of not one river valley, but all our rivers, and the entire subcontinent.

The project is aimed at taking the water from rural areas and agriculture to industrial areas and cities. This is a plan for commodification of India's waters and rivers. I have done detailed studies of the Ken-Betwa link, and the Sharda-Yamuna link.

Q. The project involves mammoth investment. The estimated cost in 2002 of the project was Rs 5,60,000 crore - how do you view the cost benefit dynamics?

It is a negative cost benefit. The project is equal to 25 per cent of the country's GDP, or two and a half times the annual tax collection. The project would require external financing, putting a debt of $112 on every Indian, whose annual income is between $400 and $800.

Q. If this project does not take off, what alternative would best work for a country like India, which is so heavily dependent on the monsoons, has a food security issue and irrigation shortfall?

There are many alternatives based on water conservation. The first is to conserve water in the soil through organic farming. Organic farming increases humus, which can hold 90 per cent of its weight in water like a sponge. Organic soils become a water reservoir, in contrast to chemically farmed soil which demand intensive irrigation and have no water holding capacity.

The second is water harvesting on a national scale.This is how the tank systems in the Deccan were built, this is how the Chandelas and Bundelas created the water infrastructure that has fallen into disrepair, as we ignore the local and small systems that add up to be the hydrological backbone of the country, and are obsessed with the big, even if it is destructive and negative. The 'big is beautiful' mentality allows the centralised state to usurp the power of communities and states. The river linking project will allow corrupt corporations to usurp water rights and power from the people.

We cannot sell to everybody: Boeing's Dinesh A. Keskar