The first thing you notice about the Nokia Lumia 800 is that it is quite good-looking, no open slots on the body and just a few chromed buttons on the right hand side, a volume toggle, a power button and a camera button, and on the top an audio out port.

Nokia India started selling their new Lumia 800 in retail outlets last week. This is the first device Nokia is retailing that has Windows Phone 7.5 'Mango' running on it, and has been long-awaited ever since Nokia's CEO publicly ditched the Nokia developed Symbian platform earlier this year.

Kushan Mitra
I have been using the Lumia 800 for over ten days now, and I must admit that I have been pleasantly surprised by the device - good-looking hardware coupled with Mango; which I first used on a HTC Radar and found quite impressive; and some neat software tools make this the best device that Nokia has introduced in quite a while.

OUT OF THE BOX
Nokia, like several other manufacturers seems to have gone the Apple route when it comes to packaging. I used to like Nokia's nice big boxes, but with installation CD's becoming passe, the Lumia 800 has a nice compact box. 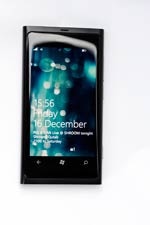 The first thing you notice about the phone is that it is quite good-looking, no open slots on the body and just a few chromed buttons on the right hand side, a volume toggle, a power button and a camera button, and on the top an audio out port. The micro-USB port and the slot for the micro-SIM is conveniently hidden by a plastic cover, which takes some getting used to, especially like me if you try to open it at night to connect it into your car charger (no, I did not do the obvious thing and turn on my cabin light).

Unlike, the Nokia N8 which I have used for the past 14-odd months , there is no expandable memory slot. While this might make some people very, very unhappy, the 16 gigabytes of on-board memory should be enough as long as one keeps dumping pictures and videos onto a computer or uploading them.

USING IT FOR THE FIRST TIME
I decided to use my existing Vodafone number on this device as well, which involved getting a new micro-SIM card, which I did at Vodafone's Connaught Place store. Took me over half an hour, which was an unnecessarily long amount of time, but once I got the new SIM I was good to go.

I have had major issues with Vodafone because in my house, the Vodafone signal is very weak, but like all Nokia's the Lumia 800 excels in having an excellent radio transceiver. This device has excellent mobile network pick-up, both 3G as well as 2G, good WiFi signal pick-up and coupled with Vodafone's fairly impressive 3G network, as compared to the Sony Ericsson Xperia Pro I use on Airtel's HSPA network, the Lumia 800 impressed me on those fronts. Yes, there will still call drops inside my house, but fewer than before, which was when using my N8.

After having used the Nokia N8 for so long, I did not expect the Lumia 800's capacitive touch screen to be so good. Make no mistakes, this touch-screen is fabulous and is coupled with an excellent display. The display is not as good as Samsung's excellent AMOLED screens on the new Galaxy devices, but still very good.

Making calls is easy, and though there are things I prefer about Android and the iOS over Windows Phone, those can be handled fairly easily. Typing on the touchscreen is very easy and is frankly comparable to Apple devices. Configuring email accounts is again a snap and although you need to create a Windows Live account to use the device, which might mean re-activating a long dormant Hotmail address (mine had lapsed, so I created a new Live account) I found that rater easy when I used the HTC Radar I had.

CAMERA AND APPS
Put it this way, the Lumia 800's camera with Nokia's by-now signature use of Carl-Zeiss Tessar lenses is good, but not as good as the Nokia N8, whose camera was better than cheap point-and-click devices. The camera is good in low-light conditions and has a decent flash, but despite a slightly recessed lens, the lens cover can get smudged a bit.  Basically put, the camera is one of better ones out on contemporary and even videography is a breeze. You can save pictures and videos on Windows SkyDrive very easily indeed. 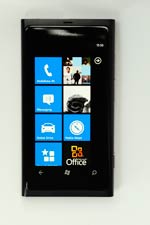 The one big plus of Android over competing operating systems is that many applications are free on Android, whereas they are paid on iOS and Windows Phone, and that is a bummer. That said, the best application the Lumia 800 has is pre-loaded, and that is Nokia Drive. For the first time, I used a GPS routing and mapping software that beat the pants of standalone GPS navigators. A few days ago, I had to find a hotel I had never been to where I was meeting some friends and this application with its easy inputs, excellent catalog of points of interest and very good navigation advice . Much like the Nokia N8 put paid to low-end digital cameras, the Lumia 800 is an excellent navigation device. 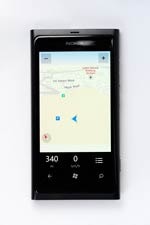 If Nokia can do another great software job with their upcoming music and online radio applications, they could still end up looking quite attractive in the market.

ISSUES
Windows Phone 7 has issues when you plug it into a Windows XP, device recognition is difficult. No issues when you use a Windows 7 computer, but I use a MacBook Pro at home and a XP device at office. Sure, you can transfer stuff over the air onto SkyDrive and access it from there, but…

ALL IN ALL
Great device, does it distinguish itself from other Windows Phone 7 devices? Yes, the navigation software is a great piece of software by Nokia. Is it worth the Rs 30,000? Now, honestly, I would buy a slightly cheaper Android device, but it would depend on my budget. If spending Rs 30,000 did not seem too outrageous, this device is a winner. But, right now, I'm waiting for the more plasticky Lumia 700. It will be Rs 10,000 cheaper and have all the functionality. Then we'll be talking.

What's pulling the rupee down?