In his Railway Budget speech, the minister indicated that most new projects would be done via the public-private partnership model. He also emphasised on exploring alternative sources of resource mobilisation and not depend on fare increases alone. 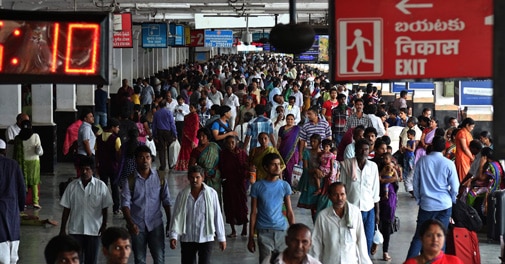 But as we go through the budget, the first question that comes to our mind is: Where is the money?

Gowda said gross traffic receipt in the current fiscal year is Rs 12,35,558 crore, with the operating ratio of the railways at 94 per cent. The recent fare revision is expected to bring in an additional Rs 8,000 crore, and the railways would require Rs 9,000 crore for the golden quadrilateral project.

The minister also spoke about the participation of private players in a limited manner, and providing facilities such as food courts at select stations. But to take most of these ambitious plans forward, the NDA government would have to open up the railway sector to private players, and certain areas for foreign direct investment.

In his speech, the minister indicated that most new projects would be done via the public-private partnership model. He also emphasised on exploring alternative sources of resource mobilisation and not depend on fare increases alone.

With 12,500 trains, the Indian Railways moves 23 million passengers every day. To put this in perspective, this is like moving Australia's entire population every day.

The Union government also has an ambitious target of setting up a Railway University to train people in technical and non-technical side of the railway business. This was Modi's pet project, and he spoke about it in his campaign trail.

Gowda promised to change the way India commutes and take the railways to international standards. The important railway terminals in the country, which are marked as A and A1 based on the daily commuters' density, will have airport-like infrastructure, Wi-Fi connectivity, e-carts for the elderly, extension of logistical support to various e-commerce companies with dedicated pick-up and drop points. The minister also said that ready-to-eat meals will be introduced in a phased manner.

The minister spoke about having a network of bullet trains, semi-bullet trains and super-fast trains connecting the most prominent cities of the country. The first bullet train project will be between Ahmedabad and Mumbai. The minister also announced special circuits of pilgrimages connecting centres of importance. Prime Minister Modi, who is likely to visit Japan after the budget session, is likely to sign up an MoU with the Japanese government and private players to be part of the bullet train project.

'Focus on technology is welcome in Railway Budget'