Monsoon picks up, but farmers in for losses

Although the national weather office has said that monsoon has covered all of the country, rainfall in the first six weeks of the wet season has been more than a third below normal. 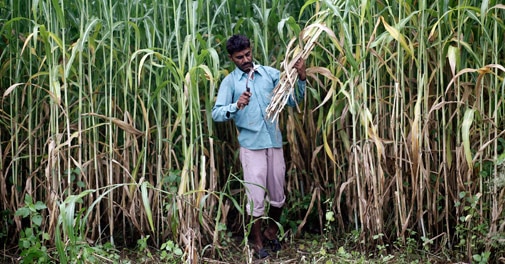 Monsoon deficit has come down to 31-32 per cent with rains picking up in July across the country, the government said on Sunday, asserting that there was no reason to be unnecessarily alarmist.

"The monsoon deficit has come down by 12 per cent and the overall deficit stands around 31 per cent. This will bring in much-needed relief to the farmers and solve the water issues," said Laxman Singh Rathore, director general of the India Meteorological Department (IMD).

Singh on Sunday visited the IMD at Mausam Bhavan for a personal assessment of the monsoon data recorded over the last six weeks.

Even though the government eased fears on Sunday, the fact remains that the country is on the verge of a widespread drought with the monsoon rains coming several weeks late.

Although the national weather office has said that monsoon has covered all of the country, rainfall in the first six weeks of the wet season has been more than a third below normal.

A poor monsoon could raise imports of cooking oil to India, the leading buyer of vegetable oils. The country may also cede its position as top rice exporter to Thailand.

Even if the monsoon revives during the rest of the planting month of July, farmers expect losses of at least a fifth in summer-sown crops like rice, corn, cane, soybean and cotton.

Farmers worry that the impact this year could be worse than five years ago, when India suffered its worst drought in four decades.

"The rains improved in early July five years ago, but this year the dryness stretched beyond the second week of July," said Yogendra Singh, who mainly grows cane on five hectares of land.

Other farmers are turning away from cane to other crops that they hope will safeguard their incomes.

Govt may move SC on third arbitrator in RIL case