Wheat, rice stuck in FCI godowns due to official lethargy

While prices of wheat and rice have been going up despite overflowing stocks in FCI godowns, the profitability of the Railways has been hit as well as wagons are being held up for days and cannot be used to move other goods. 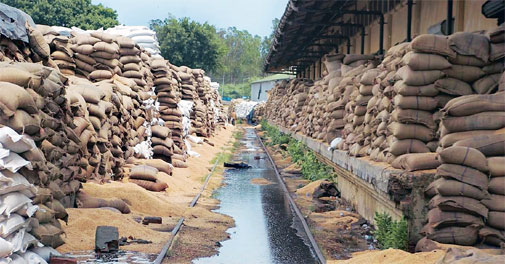 The lethargic handling of foodgrain by the Food Corporation of India (FCI) is proving costly for the economy.

While prices of wheat and rice have been going up despite overflowing stocks in FCI godowns, the profitability of the Railways has been hit as well as wagons are being held up for days and cannot be used to move other goods such as cement, fertilisers and sugar.

Although the erstwhile United Progressive Alliance (UPA) government had been assuring consumers that there were ample stocks with the FCI, it failed to curb food inflation. The ground reality is that wheat and rice remain stuck in the godowns and are not moved quickly enough to ensure easy availability to consuming markets.

Senior railway officials are of the view that the FCI needs to expedite the loading and unloading of wagons in order to ensure a quicker movement of foodgrains.

A senior railway official told MAIL TODAY that the FCI takes 40-60 hours to unload a rake, which is much longer than other goods. The same number of railway wagons carrying cement, for instance, are being unloaded in nine hours, he said. "Ideally speaking, the rake should be unloaded in 9-11 hours but this is not happening," the official added.

"The average turnaround time for a wagon, which should be around five days, gets extended to seven days in the case of FCI, which adversely impacts earnings of the Railways and the movement of other goods such as fertilisers which tend to pile at the ports causing congestion down the line," the official explained.

The Railways are also under pressure to move fertilisers at a quicker pace to ensure timely availability to farmers during the sowing season and cannot afford to have their rakes stuck at FCI sidings.

According to sources, the highly unionised FCI staff works on an office-hour-like routine with offs on Sundays and holidays.This reduces the number of working hours and slows down the turnaround time of railway wagons.

In fact, there is not enough space in the FCI godowns and foodgrains are being stored in the open under plinth and cover. There have also been several instances of wheat and rice rotting in Punjab and Haryana due to the lack of space storage.