The A3 is the first model from the Audi stable to be locally produced before being launched in India. 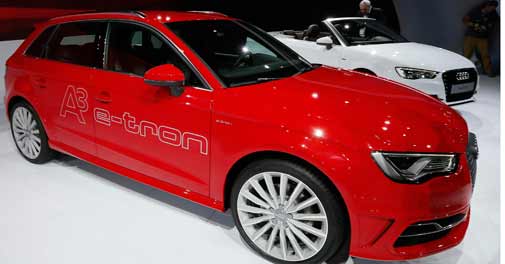 The company is betting big on the new model to stretch its leadership in the Indian market and is targeting a new segment of the compact luxury sedan besides tapping repeat buyers.

"We think this is the right product for self driven, young customers in urban environment. Besides, we are also looking to those existing Audi customers who are looking for second car with the A3. We expect 15 per cent of our total sales to come from this model," Audi India Head Joe King told PTI.

He said the A3 is expected to join the compact SUV Q3, sedans A4 and A6 as the company's growth drivers in India.

The A3 is available in both petrol and diesel variants.

The petrol variant powered by a 1.8-litre engine will come at a price of Rs 28.95 lakh.

Commenting on sales growth, King said: "As expected in the first half of the year, the industry growth was flat but we expect sales to pick up in the second half. As for Audi we are looking at double digit growth this year, which will be another record year for us."

In India, the luxury car market has seen the likes of hatchbacks A Class and B Class from Mercedes and 1 Series from BMW that has improved the affordability range with prices starting just above Rs 20 lakh.

Betting big on the A3, Audi India has already started local production of the model from VW group firm Skoda's Aurangabad plant.

The A3 is the first model from the Audi stable to be locally produced before being launched in India. Other models, such as sedans A6 and A4; SUVs Q5, Q7 and Q3 which are locally produced now were imported as completely built units (CBUs) at the time of launch.

King said the local production of the Audi A3 Sedan in India is continuation of the company's growth strategy and consistent focus on the Indian market.

When asked if this strategy would be continued with other future products, he said: "That's something we will consider as we expand our product portfolio here in India."

The annual capacity at the plant for all Audi models is more than 14,000 units in a one-shift operation.