The price tag of Rs 4.10 crore is still subject to exchange rate fluctuations and options. The car can be booked at any of authorised dealerships in Delhi, Mumbai and Hyderabad 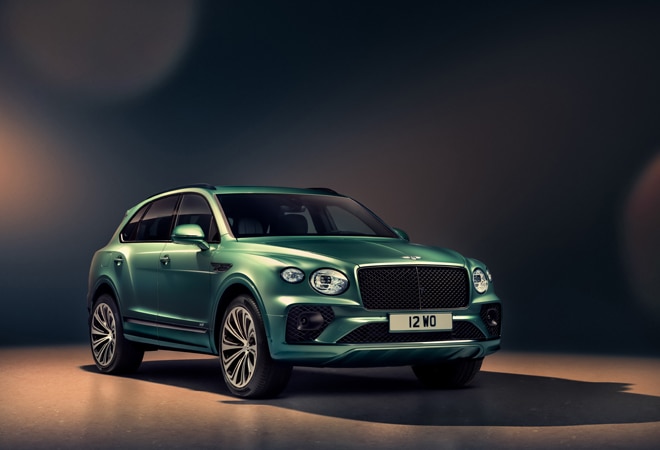 Marque British super luxury carmaker Bentley has launched the new version of its only SUV Bentayga, which it claims is the fastest SUV in the world, in India at a jaw-dropping Rs 4.1 crore.

The new Bentayga is the first car launched under Bentley's new Beyond100 business strategy, which will see the company become the world leader in sustainable luxury mobility.  Built on the popularity of the first-generation model, which was launched globally in 2016 and quickly became one of Bentley's all time bestselling nameplates with more than 20,000 customers worldwide, the new Bentayga is powered by a 4-litre twin turbocharged V8 petrol engine that has a peak power output of 542 bhp and torque of 770 NM. It is capable of sprinting from 0-100 kmph in just 4.1 seconds, making light work of its 2.5-tonne kerb weight.

"Bentley is the world leader in luxury mobility and has been defining new luxury in the automotive world. The newest addition to the range, the new Bentayga, is everything Bentayga was designed to be, balancing exquisite refinement with astonishing performance," said Satya Bagla,  Managing Director, Exclusive Motors, the official importer for Bentley in India. "The new Bentayga encapsulates the desire to innovate as well as celebrate our heritage and take the Bentley ownership experience to the next, unparalleled level. We are elated to bring the new Bentayga to the Indian customers. Bentley has been at the forefront of luxury automotive for over 100 years and this new Bentayga is the pinnacle of design and engineering achievements and marks the next step in Bentley's journey."

The price tag of Rs 4.10 crore is still subject to exchange rate fluctuations and options. The car can be booked at any of Bagla's dealerships in Delhi, Mumbai and Hyderabad.

Bentayga is one of the prime examples of super luxury carmakers queuing up to make SUVs to cash in on the popularity of all-terrain vehicles worldwide. Others that have fallen prey to this trend are stablemate Lamborghini (like Bentley also part of the Volkswagen Group), Maserati and Jaguar. Ferrari will also launch its first ever SUV--the Purosangue, sometime next year. Though the Purosangue will be a direct rival to the Lamborghini Urus, its potential customer profile will be similar to those that conisder the Bentayga.

"The Bentayga set the luxury SUV benchmark back in 2016, offering customers the ultimate Grand Touring experience unrestricted by landscape or conditions. Go-anywhere driving ability and imperious luxury are the hallmarks of the Bentayga - powerful, individual and exquisite in equal measure, the Bentayga is for those who demand luxury without compromise," the company said in a statement. "Now, Bentley raises the bar for the luxury SUV sector even higher. Others will strive to achieve the same combination of luxury and performance - but none can do it like Bentley."

Volkswagen unable to build 100,000 cars due to ongoing chip shortage