"The M6 Gran Coupe is the flagship of M Series. It will be available across the country from today," BMW Group India President Philipp von Sahr told reporters on Thursday. 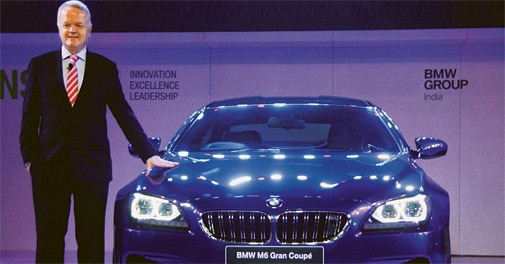 Besides, the company also announced the opening of its Rs 16-crore training centre in Gurgaon.

The new M6 Gran Coupe, which comes as a completely built unit (CBU), will be available with a 560 HP petrol engine in the country.

"The M6 Gran Coupe is the flagship of M Series. It will be available across the country from today," BMW Group India President Philipp von Sahr told reporters.

The luxury car would play a key role in the company's brand building in the country, Sahr added.

When asked about the company's new launches during the year, Sahr said: "As announced earlier, we will launch four models this year and you can also expect launch of more M series cars during the year," he added.

Commenting on the BMW Group Training Centre, Sahr said the initiative shows the company' commitment towards the Indian market.

"The centre would allow us to provide training to our sales representatives, dealers and associates. The facility would also be utilised to impart taring to overseas associates in the future," he added.

"It will prove to be a key differentiator between us and the competition in the future," Sahr said.

He added that the company focused on volume growth last year and would look to grow profitable this year.

Currently, BMW sells a range of vehicles in India including sedans 3, 5, 6 and 7 Series, along with SUVs X1, X3, X5 and sports car M Series.

It assembles seven models including the 1, 3, 5 and 7 Series and X1 models locally at its Chennai facility.